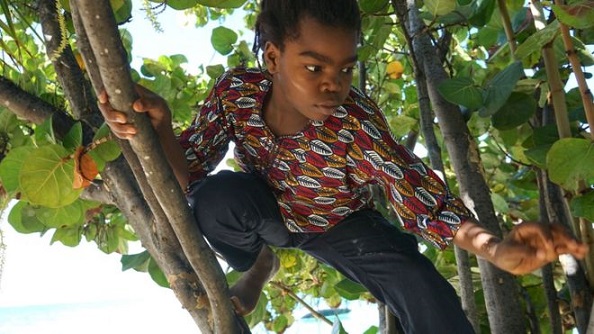 A crater-pocked road leading to a cluster of simple plywood homes ringed with vegetable fields might seem unlikely territory to find a Hollywood movie star. But when New York director Benh Zeitlin was on the hunt for a child to play a wild-eyed Peter Pan in his new movie, Wendy, this tiny Rastafarian village in Antigua is where his search bore fruit. Not only has the Searchlight Pictures production propelled 10-year-old Yashua Mack into the limelight, it has taken this most private community along for the ride.

For almost four decades, the village’s two dozen followers of the Nyabinghi order, the oldest of all the Rastafarian subgroups, have lived largely shielded from society in the Caribbean island.

Often stigmatised for their belief that smoking marijuana helps attain wisdom, villagers have in turn resisted outside influences deemed harmful to their ascetic, agrarian lifestyle. Still, “to have one of our sons featured in a movie is an exciting moment”, Yashua’s mother Aziza Roberts tells the BBC. “It’s given the world an opportunity to take a look at Rastafari from a different perspective. People can learn a lot from us about the simplicity of life.”

Away from the cameras, life here is unchanged. Women in African dress are slicing star fruit and shelling tamarind under the shade of a mango tree, the tractor is being prepared for a day’s work, and dreadlocked children are heading off on foot to the community’s faith-based school.

Yashua, already bored by his newfound fame, vanishes with his pals. His father Osagyefo Mack says the movie’s central premise bears similarities to the Nyabinghis’ ethos of remaining youthful at heart. A diet of fresh fruit and vegetables, while shunning alcohol and meat, “keeps our spirit calm and vibrant”, he explains.

Mr Mack helped found the community in 1983 after researching the African roots of his countrymen brought to Antigua during the slave trade. His studies led him to the Afro-centric religion which regards former Ethiopian Emperor Haile Selassie as God incarnate.

Rastafarianism also teaches a spiritual connection to the Earth. At the compound’s school, education in traditional medicine is as important as religious and conventional studies. “This is good for fighting fever,” Mrs Roberts says, plucking a neem leaf and chewing it. “Everything we need for our health is here; seawater, sunshine, herbs, and fresh fruits and vegetables.”

The 11-acre community is predominantly self-sufficient, with fields abundant with produce and its own electricity generators and fresh water ponds, although it is linked to national power and water supplies too. “Children here have a different life to most kids because they live at one with earth and nature. They’re taught to recognise the seeds they eat, and how to plant them to continue the circle of life,” Mrs Roberts says.

It was precisely the village’s rustic, unspoiled ambience that so endeared Mr Zeitlin when he first visited in 2013. The hamlet is one of a handful of scenes shot in Antigua to make it into Wendy’s final cut. The remainder of the movie was filmed in neighbouring Montserrat.

The reimagined version of JM Barrie’s classic tale of the boy who never grew up was released into cinemas worldwide in late February.

For the Beasts of the Southern Wild director it was vital that non-actors were cast for its leading roles. Not only had Yashua never acted before, he is also the first black child to play Peter Pan in a major movie. “Any kid that was already on track to be an actor wouldn’t have been right for Peter. I wanted a child with a mischievous, wild spirit, who lived among nature and loved to be outside,” Mr Zeitlin tells the BBC. “We had real trouble finding one. Kids don’t live that way anymore; their imagination is routed through phone screens.” He admits he had almost given up when he was brought to the Nyabinghi village and met Yashua, who was just five at the time.

Yashua was invited to play an acting game in which Mr Zeitlin played a lumberjack poised to chop down the child’s favourite tree. “I remember the moment he dropped into character. He was so fierce defending his tree that I wondered if he thought it was real. Then he grinned and I knew we had found Peter,” the director says. The film took seven years to make – two spent teaching Yashua how to “swim, sword-fight and leap off two-storey platforms”.

Yashua is slowly getting used to being recognised and says he loved walking the red carpet at January’s Sundance Film Festival. “I’ve never seen that many cameras and everyone with flashing lights,” he grins. But his background keeps him “grounded”, his mother says.

Yashua says his favourite pastime is still “playing in the yard with my friends”. Asked what he would like to do when he is older, he breaks into a smile, looks across at the nearby seagrape trees, and replies “live a normal life”.