“For us, it’s very difficult to avoid crowded places,” a worker in Havana said. “Let’s hope that what’s happened in other countries doesn’t happen to us.”

Before Cuba announced late Monday that schools would be suspended to prevent the spread of the new coronavirus, documentary filmmaker Ingrid León, 42, was already keeping her son home.

Her son’s school in Fontanar, a suburb of Havana near the airport, doesn’t have running water or soap.

León said there is alarm in her neighborhood after someone tested positive for the virus. For now, she stays home with her son and wipes everything down with Clorox.

“I am worried. Very worried,” she said.

Cuba has 57 confirmed coronavirus cases, 1,479 people are hospitalized for surveillance and 37,788 are being monitored at home by doctors. So far, there has been one death on the island – a 61-year-old Italian tourist who contracted the virus before he arrived.

In a televised roundtable Monday night, Cuba’s communist government announced stricter measures to combat the coronavirus. Schools are suspended until April 20, Cubans are barred from leaving the country, and transportation between provinces is banned. Cubans were also urged to maintain a distance of 3 feet when making lines outside stores or commercial establishments — though it urged the usual 6 feet of social distancing when possible.

While cases or coronavirus slowly rise in Cuba amid shortages, this seamstress is making masks at home and donating them to her doctor and others in her community. 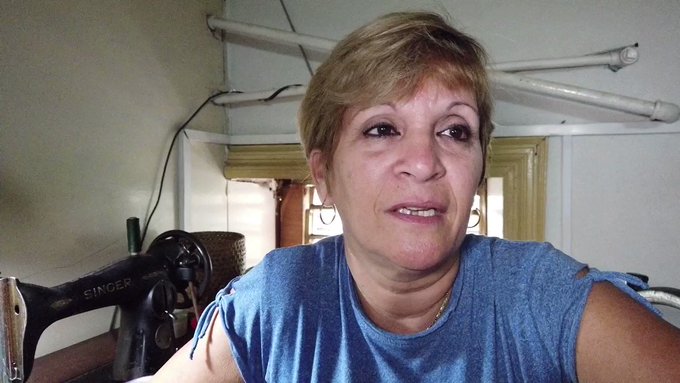 But in many parts of Havana, it was business as usual Tuesday, with people going to work and others shopping for goods that are in short supply and in high demand. In a shopping center at the Focsa building, in the Vedado neighborhood of Havana, people lined up outside stores without minding the new three-foot distance rule.

Aida, who asked that her last name not be used, said she is relieved kids can stay home from school, but worries about the lines outside stores. The 57-year-old accountant and grandmother of two girls requested to take time off from work to take care of them.

“It’s a dangerous disease, and as much as I protect myself at home, there is no guarantee when I go out.”

The island faces chronic shortages in basic goods that have worsened with the Trump administration’s tightening of the embargo, citing Cuba’s human rights record and its support for Venezuela’s government. Long lines and crowds outside stores are a normal way of life here.

Soap and detergent are difficult to find right now in ration stores, which are those that sell by the “libreta” or ration book. But they are available in dollar stores for those who can afford it.

Worrying some is the lack of water in some parts of the island, including the capital. Some areas receive water from aqueducts every two or three days, which means homes have to ration water and could run out if people are constantly washing their hands and cleaning.

As in most major cities where people depend on public transportation, the crowding can be a major source of contagion. With a lack of cars on the island and an oil shortage, Cubans can spend hours waiting in close proximity to one another at a bus stop and then hop on an overcrowded bus to take them to work.

Cuba’s large elderly population puts a big percentage of the people at a high risk of complications and death due to the coronavirus. More than 20 percent of Cubans are over 65.

All mass media in Cuba is controlled by the state, but with increased internet access, Cubans can compare their government’s response to that of other countries.

“The people are the ones who suffer”

Some have criticized the government for not taking more dramatic measures. Cuban reggaeton star Yomil posted a video Monday on his Facebook page imploring Cuba’s president, Miguel Díaz-Canel, to take more dramatic measures such as asking people to isolate at home, as well as find a solution to the long lines and shortages.

Yomil also asked Cubans in Miami to help by demanding a temporary lifting of the embargo for two or three months.

“At the end, it’s the Cuban people that pay for everything,” he said. “The people are the ones who suffer.”

Cuba, which touts itself for its readiness in the face of epidemics and natural disasters, has doctors and medical students knocking door-to-door checking on its citizens and asking them if they have experienced any symptoms.

State-run television constantly advises Cubans on safety measures such as washing hands, keeping a 6-foot distance between people, and wearing a mask if someone has a cough. Although the government is using part of its textile factories to make masks, it has also called on Cubans to make them at home and has been airing tutorials on television explaining how to make them.

Ivón Díaz, a seamstress from the Vedado neighborhood of Havana is among those making masks at home and donating them. She has been supplying masks to the doctor and nurse who run the family practice where she is a patient. She also donates masks to friends and others in her community.

Ernesto, 45, a construction worker, who asked to not use his real name, says he’s afraid of what is yet to come.

“For us, it’s very difficult to avoid crowded places. We continue working. Let’s hope that what’s happened in other countries doesn’t happen to us,” he said.

One thought on “Cubans grapple with coronavirus amid shortages and tightened U.S. embargo”