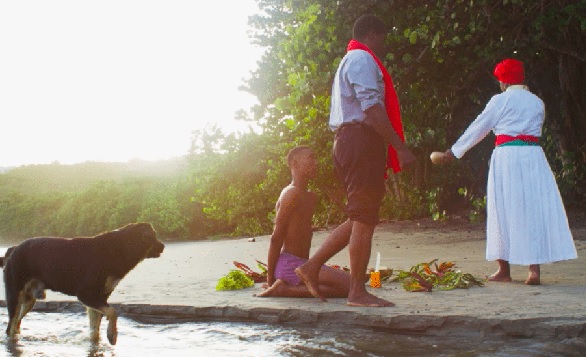 The film, which debuted in the Grenada Pavillion at the 2019 Venice Biennale, was shot in five days in Grenada, said Lauren Beck, the film’s producer.

The film is a fluid mix of a semi-autobiographical and fictional narrative about the Caribbean community’s relationship with queer identity. True to Grenadian culture, it opens with scenes of Jab Jab emerging from the sea and was littered throughout by a larger theme of colonialism and how that past influenced the thinking of the people– a thinking that is still prevalent in the Caribbean and brought by some here to America.

Frank, who lives in Brooklyn, told the audience during the film’s talkback that he “was sort of exiled” from Grenada because of internalized homophobia and fear. Returning to his country helped him face that. His trip back to Grenada three years ago after 18 years away was a result of his father becoming gravely ill. Finding mementos that archived his father’s life was one of the catalysts for making ‘Second Eulogy,’ where the relationship between a father and his queer son was central in the film.

Frank explained his inspiration for the film’s style:

“I feel it was important to employ a tone that felt closer to fiction and abstraction to give me the poetic liberty to construct alternate plotlines, preconceived notions and expectations of revisiting – at times – painful and uncomfortable memories of growing up on the island as a gay teenager,” Frank told BK Reader.

Homophobia in Caribbean culture has been addressed in Caribbean contemporary art and stories by other artists such as Renee Cox and Christopher Udemezue, both Jamaican-Americans living in New York, who spoke at the talkback as well. Cox, described as “one of the most controversial African-American artists working today,” was candid about where she believes the origin of homophobia in the Caribbean derived.  “For me, I have to mention the missionaries and what they’ve done in terms of the homophobia because homosexuality is not new,” she said. “They were always within the family and people didn’t have the compulsion to go out and stone them, kill them or eradicate them. They were accepted.” Cox continued, “Then you get your missionaries coming into Caribbean countries and into African nations as well and basically poisoning the people’s minds, telling them that this is a big sin and they need to be eradicated, crucified.”

Telling these stories about identity and life through a Caribbean lens is important to Frank: “Our history is different from African Americans, and we should look at the incredible art and unique stories that come out of the Caribbean,” he said. “What we have is very unique in the Caribbean. We are very multi-cultural, complex country, places, islands. And I do think there is a lot of art that comes from the Caribbean now and our stories are unique from the other stories.”

[Many thanks to Peter Jordens for providing these links.]