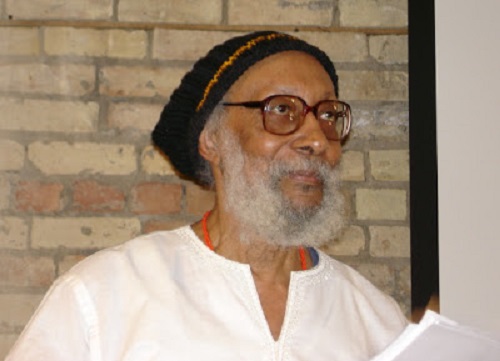 It is with profound sadness that I share the news of poet and scholar Kamau Brathwaite’s passing. He touched and inspired so many of us through his courageous thought and words. Rest in peace, beloved and much admired Kamau Brathwaite (1930-2020).

Here is a brief biography from Poets.org: (Edward) Kamau Brathwaite was born in Bridgetown, Barbados, on May 11, 1930. He attended Harrison College in Barbados and graduated with honors from Pembroke College, Cambridge, England, in 1953. After working as an education officer in Ghana and teaching on the Jamaica campus of the University of the West Indies, he returned to England and received his PhD from the University of Sussex in 1968.

His poetry traces historical links and events that have contributed to the development of the black population in the Caribbean and is distinguished by its experimental linguistic (and often multilingual) explorations of African identity in the West Indies. He is also the author of two plays and several collections of essays and literary criticism.

Brathwaite has received the Neustadt International Award for Literature, the Casa de Las Americas Prize for poetry and for literary criticism, as well as fellowships from the Guggenheim Foundation, the Fulbright Foundation, and the Ford Foundation. In 2018, he received the PEN/Voelcker Award for Poetry. He is a professor of comparative literature at New York University and divides his time between Barbados and New York.