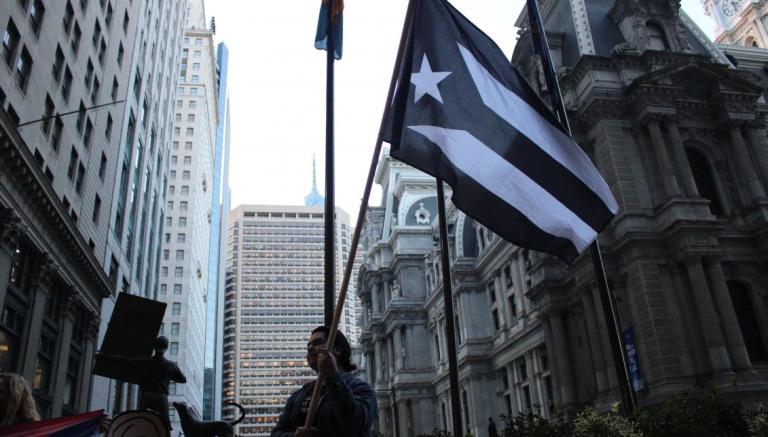 A report by Emily Neil for Al Día News.

Grassroots organizing in the diaspora has made a difference for Puerto Ricans struggling to recover from the recent earthquakes.

Hours after a 6.4 magnitude earthquake rocked Puerto Rico in the pre-dawn hours of Jan. 7, Philly Boricuas, a local grassroots organization in Philadelphia, called for an emergency planning meeting at Providence Center, in Fairhill, Philadelphia.

Organizers decided to spearhead a relief drive for those in the hardest-hit areas in the southern part of the island, and start collecting donations to create emergency backpacks.

The group, which as of Jan. 28 has sent 1,276 pounds of donations to the island, worked with other partners in Philadelphia and on the ground in Puerto Rico to collect and distribute the vital supplies.

They are a local example of the pattern of grassroots organizing throughout the Puerto Rican diaspora and on the island which has grown out of Puerto Ricans’ distrust of their own government’s ability and willingness to efficiently respond to natural disasters. From an open online platform called SuministrosPR, which has allowed for a full listing of the needs of each individual neighborhood and municipality affected by the recent earthquakes, to the emergency backpacks which Philly Boricuas organizers Puchi De Jesus and Adrian Mercado handed out camp to camp, door to door, in a visit to the island Jan. 18-21, it has been citizen-powered, non-government affiliated relief efforts which have served as the first responders to Puerto Rico’s most recent natural disaster.

On Jan. 15, President Donald Trump declared a major disaster in the southern portion of the island, freeing up some federal assistance funds “on an ongoing basis”. That same day, Department of Housing and Urban Development (HUD) Secretary Ben Carson authorized the release of an additional $8.2 billion of the more than $18 billion of Congress-approved aid allotted to the island in the aftermath of María.

Though many Puerto Ricans applaud the release of the HUD funds, they also say that it is too little, too late, as the government’s disaster response has been too slow to meet the needs of the more than 8,000 people who have been displaced by the earthquakes.

When they landed in Puerto Rico on Jan. 18, donations and emergency backpacks in tow, Mercado and De Jesus used the Geological Survey map to identify where the hardest hit areas of the island were. They focused much of their distribution efforts on Guánica, Yauco, and Guayanilla as the three most affected towns.

They also used the listings and contact information on the SuministrosPR website to plan out which areas to visit and distribute supplies to, according to the needs posted by individual camps. The website – designed by Juan Pablo Díaz, a well known comedian and host of the Youtube show, Estado Crítico, along with Giovanni Collazo, Orlando Vélez, and Javier W. Vélez – has taken off since it was launched on Jan. 12. It is now recommended by the Federal Emergency Management Agency (FEMA) itself as a valuable tool for aid distribution.

Mercado and De Jesus’ journey took them to official government-run shelters and unofficial camps across the region, some of which consisted of tents pitched in baseball fields, or sleeping bags at school buildings.

In the course of their visit, they learned that many people still did not have an emergency plan for how to leave their house or their neighborhood in the event of another major seismic event or a tsunami, though it had been over a week after the major earthquake and in the midst of experiencing daily aftershocks.

“With people still sticking around and living in houses that are in danger of collapsing, you have to have a plan…Our goal was to just get people ready to know what to do in case of an emergency,” Mercado said.

That reassurance also helps relieve some of the stress that many people are living with due to the constant threat of earthquakes, and the uncertainty that remains since the government has yet to release a plan for rebuilding communities.

Mercado reported that many people they spoke with in the course of distributing supplies said that they hadn’t interacted with any government officials; one man in Playa Santa told Mercado, “It’s just been people like you, ordinary people just swinging by.”

Frustration at local municipal politicians as well as island-wide government has brewed among many of those who have been displaced.

Mercado said that in Guánica, at least one camp leader said that that town’s mayor hadn’t shown up to check in on the camp until five days after the earthquake. And as recently as Jan. 27, the mayor of Ponce, María “Mayita” Meléndez, has been widely criticized after she told a reporter that people in the camp at Ponce “loved” living there, in what many considered to be a tone-deaf response coming just days after one of the main camps in the area had been flooded this past weekend.

As a warehouse of unused relief supplies dating to Hurricane María was discoveredin Ponce on Jan. 18, calls for Governor Wanda Vázquez’s resignation have grown. Vázquez’s failure to release a plan for permanent shelter for those who have been displaced, as well as the continued hold up of federal funds on the part of the Department of Housing and Urban Development, have contributed to what Mercado described as a “cynical” view that many Puerto Ricans have of any possibility of government support, whether it be from La Fortaleza in San Juan or the White House in Washington, D.C.

All of this means that Puerto Ricans like Mercado view it as less than a triumph that once again, regular citizens and residents are having to bootstrap relief operations in place of government aid.

“It’s optimistic about people stepping up and doing their part, and filling in the void, but you’re really also at the same time angry and depressed about it,” Mercado said.

“It’s just really bizarre that a group from Philadelphia…just went ahead, and not just us but basically everyone from the island, went ahead and circumvented the whole government process of responding to this natural disaster,” he added. As Benjamín Torres Gotay wrote in an opinion column in El Nuevo Día on Jan. 19, SuministrosPR was perhaps the “most clear example of the citizen response to the collapse of institutions,” as Díaz and his friends were able to “quickly and without cost create what we all know, hand on heart, that the government would have done late, expensively, and badly.”

For Karen Rodriguez, who was one of the organizers of the Power 4 Puerto Rico protest outside of the HUD offices in Center City, Philadelphia held on Jan. 15, what Mercado and De Jesus saw on the island in their visit in the aftermath of the major earthquake on Jan. 7 is nothing new.

She said that both the efforts of protesters to demand HUD release aid, as well as the earthquake relief drive, are the most recent examples of the ways in which the Puerto Rican diaspora on the U.S. mainland has filled in the gaps to support Puerto Ricans on the island.

“If it wasn’t for the diaspora community, we would have starving people in Puerto Rico. Because right after Hurricane María, when the administration was very slow to respond, it was us that mobilized all of our Puerto Rican communities across the entire country, and we found ways to get food, water, anything that people needed, to the island,” Rodriguez told AL DÍA at the Jan. 15 protest.

“And we are doing the same thing again,” she added.

A group of around ten protesters who gathered in North Philadelphia on Jan. 20 echoed Rodriguez’s view; they pointed to charges of corruption which date back to the response to Hurricane María as indicative of the government’s failure.

“I worked in Puerto Rico, and I can say that we didn’t have quick access to many things because [government officials] were stopping us,” Charito Morales, nurse and community organizer at Providence Center, said of her experience in emergency relief efforts on the island immediately following Hurricane María.

The discovery of the warehouses on Jan. 18 was evidence, Morales said, of what many Puerto Ricans already suspected.

“For this reason, 4,645 people and many more died,” she said, citing the death toll from Hurricane María as calculated by a 2018 report from Harvard University’s T.H. Chan School of Public Health.

Mercado said people were appreciative of the fact that they had flown to the island from Philadelphia to be there to support the communities there. He said it “feels good to be a part of” a larger network offering support, including other Puerto Ricans on the island as well as diaspora communities in Florida and New York.

But ultimately, Mercado said that grassroots organizing won’t be enough.

“There is an optimism that after natural disasters, Puerto Rico was able to kind of do this kind of work after the hurricane and after the earthquake, but there’s a limit to what small groups can do,” Mercado said.

“Charity only goes so far.”

One thought on “From Philadelphia to Puerto Rico, earthquake relief efforts have been powered by the people”