A report by Matthew Capucci and Jason Samenow for The Washington Post.

One of the strongest earthquakes on record in the Caribbean, 7.7 magnitude, struck about 70 miles northwest of Montego Bay, Jamaica, shortly after 2 p.m. Tuesday. Minor shaking was felt as far north as Florida, while more moderate shaking was reported in Jamaica.

Shaking was also reported in the Cayman Islands, Cuba. and Mexico. Initial reports of damage from the region have been spotty.

In South Florida, where shaking was felt when the earthquake struck, multiple buildings were evacuated in Miami.

Several aftershocks, including a magnitude 6.1 tremor about 35 miles southeast of the Cayman Islands at 4:55 p.m. eastern, followed the initial quake.

Earthquake rattles Grand Cayman residents
Video shows residents reacting to an earthquake that struck in the sea south of Cuba on Jan. 28, and reached the Grand Cayman islands. (Reuters)

The originating earthquake appeared to be one of the biggest on record in the Caribbean, and the largest since 1946, with only a few additional high-end earthquakes appearing in the U.S. Geological Survey database.

7.0+ quakes in and around the Caribbean per USGS. For those in the Caribbean, the two in light blue were 7.7 like the prelim from today’s in red. #earthquake #jamaica #cuba 42 people are talking about this

The Pacific Tsunami Warning Center indicated that a small tsunami was possible in parts of the Caribbean and surrounding areas, with waves of up to three feet. However, just before 4 p.m., it posted that the tsunami threat had passed.

Tide gauges indicated that any tsunami waves generated by the earthquake were small.

Relatively small #tsunami wave arrival on tide gauge in Cayman Islands. Very fortunate for tsunami hazard that this is a strike-slip earthquake. 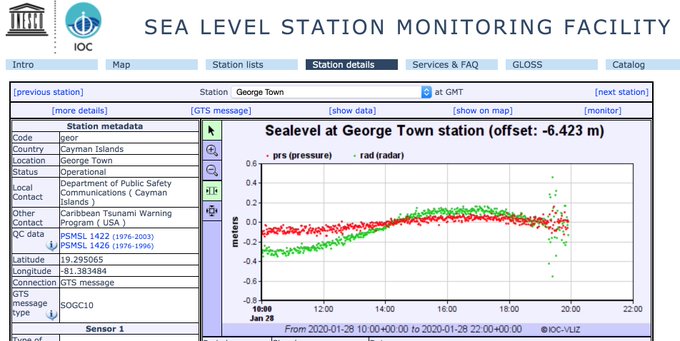 67 people are talking about this

A larger tsunami did not result as the earthquake was largely caused by a strike-slip mechanism with some obliquity. That means one tectonic plate probably slipped past another horizontally and downward.

The M7.7 Jamaican quake produced sideways motion on the fault, so the tsunami risk is low. (Seafloor should move up to make tsunami.) But if I’m ever at the beach and feel strong shaking, I move to high ground. Downside is I lose a day at the beach. The upside could be my life.

1,298 people are talking about this

Converging plates, on the other hand, are usually the most effective at generating tsunamis. The magnitude of a tsunami is proportional to the area and magnitude of the slip.

A look at background seismicity shows no recent foreshocks associated with this quake.

Initially, it appears the quake occurred along the southern periphery of the North American plate, which is inching westward. At the same time, the Caribbean plate is moving northeast at several centimeters per year. Between them lies the Gonâve microplate. The earthquake occurred near the Cayman Trough.

The energy release was equivalent to tens of billions of tons of explosives. The quake was exceptionally shallow, occurring at only a few miles’ depth. Because of its distance offshore, impacts may be minimized.

Smaller aftershocks are likely in the region in the coming weeks.

There are only 4-5 #earthquakes this strong on 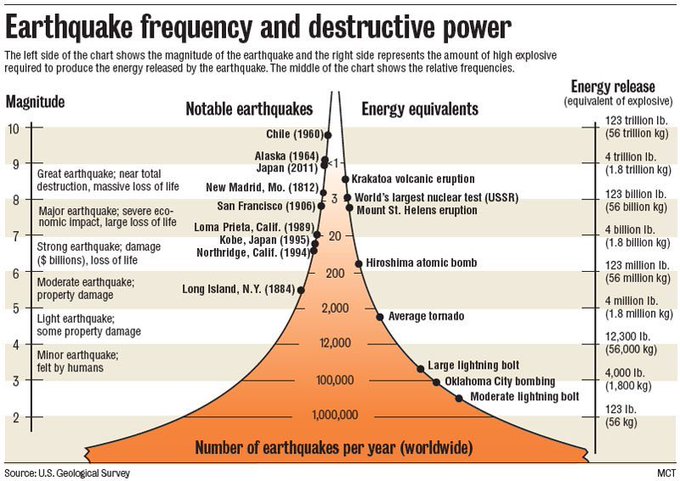 74 people are talking about this

Where the earthquake waves were detected A record section produced with data following the earthquake. Time is measured vertically, while distance from epicenter (in degrees) stretches along the horizontal. 180 degrees indicates the exact opposite point on the earth. (Matthew Cappucci/Miaki Ishii software)

A “record section” produced by data from the Global Seismic Network, presented above, shows earthquake waves spreading out and traveling around the world. Each vertical trace represents an individual seismograph. When compiled together, they illustrate the waves propagating around the globe — detected by seismometers even if humans can’t feel them. (Time is measured from bottom to top.)

Two distinct clusterings of waves can be seen in the plot. The first are body waves, which occur lower in each trace because they are the earliest waves to arrive following a quake.

Body waves move through the earth. First are the P (compressional) waves, then the S (shear) waves — about 40 percent slower when traveling through solid rock.

Ever heard folklore about animals “sensing” an earthquake before it arrives? That’s not myth. Some animals can sense the passage of ultra-subtle body waves (which we rarely feel) and take action, sometimes tens of minutes before the damaging surface waves arrive.