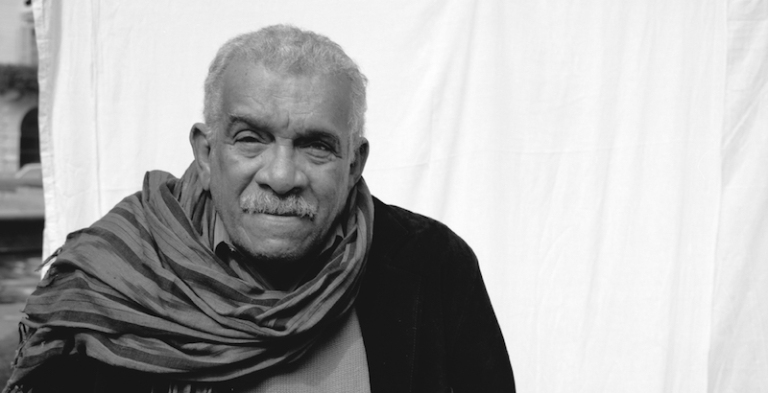 A report by Benjamin Ivry for Forward. Our thanks to Peter Jordens for bringing this item to our attention.

Editor’s Note: Derek Walcott would have turned 90 today. In honor of this date, we’re revisiting this essay written on the occasion of the poet’s death on March 17, 2017.

Derek Walcott, the Nobel Prize-winning poet from the West Indies who died March 17 at age 87, was long inspired by Jewish culture, history and friendships. As the literary scholar Bénédicte Ledent has pointed out, Walcott’s poem “A Far Cry from Africa” draws a “parallel between blacks and Jews.” The poem, about the Mau Mau Uprising, a 1950s military conflict in British Kenya, Walcott ironically describes the rebels as “savages, expendable as Jews.”

Paula Burnett, another informed reader of Walcott’s poetry, notes that although the “paralleling of the New World black experience with that of Jews in the Holocaust had been a long-standing theme of Walcott’s, the theme of Nazi atrocities takes on a fresh prominence” in his collection, “The Fortunate Traveler” (1982) In it, swirling images express the inhuman treatment of people of color by colonizers, in a world overwhelmed by the Holocaust, so that the abbreviation A.D., instead of Anno Domini, appears to represent After Dachau. The Americanist Eric J. Sundquist points to a key essay by Walcott, “The Muse of History,” published in 1974, in which African slaves arriving in the West felt “identification with Hebraic suffering, the migration, the hope of deliverance from bondage… the passage over our Red Sea was not from bondage to freedom but its opposite, so that the tribes arrived at that New Canaan chained.”

In the poem “North and South,” Walcott reflects on a modern-day scene at a former plantation in Virginia where slaves were owned: “There is no memorial here to their Treblinka -/ as a van delivers from the ovens loaves/ as warm as flesh, its brakes jaggedly screech/ like the square wheel of a swastika. The mania/ of history veils even the clearest air,/ the sickly sweet taste of ash, of something burning…like any child of the Diaspora, I remember this…” The sense of identification leads the poet to admit: “I remember once looking at my aunt’s face,/ the wintry blue eyes, the rusty hair, and thinking/ maybe we are part Jewish…”

Nor was Walcott only influenced by prejudice and historical tragedy in his fellow feeling for Jews, as the literary historian Sarah Phillips Casteel has pointed out. Walcott’s book-length poem “Tiepolo’s Hound” identifies with the French Jewish painter Camille Pissarro. Walcott depicted a painter confronted by questions of identity in the context of France’s Dreyfus affair in which a Jewish artillery captain, Alfred Dreyfus was falsely convicted of giving military secrets to Germany:

“He [Pissarro] wasn’t much of a Jew. He did not observe,/ as he had on the island, the tribal sorrow/ that Dreyfus added to. How could he serve/ the fields of France with a name like Pissarro… Perhaps of either treachery Art was worse./ Perhaps his brushstrokes should have been subjected/ To their analysis, as was Dreyfus’s hand./ Examined closely, his foliage could be read/ As Hebrew script; each vowel, each ampersand.”

Scrutinizing questions of Jewish identity as evidence of life-and-death importance, Walcott’s sonnet sequence “Tales of the Islands” refers to an exile “with the wry face of a Jew,” living in the Caribbean. In an essay “On Choosing Port of Spain,” Walcott praised Trinidad for its “beautiful and various” population of “Portuguese, Jew, Chinese, and Levantine.” Diversity was an inspiration to Walcott, who was later drawn to the wry Jewish face of one particular exile, the Russian-born poet Joseph Brodsky, whom he met in 1977. Brodsky would argue with Walcott over points of the latter’s translation of his poems into English, with the Yiddishkeit of someone who once described himself as “more of a Jew than any Jew in Israel. Merely because I believe, if I believe in anything, in the arbitrary God.”

The attribution of the Nobel Prize in Literature to Walcott in 1992 was far less arbitrary. His close friend Brodsky, with whom he had once shared lodgings, had won the prize in 1987 and influentially campaigned on behalf of Walcott, whom he placed in the literary firmament “somewhere between Marlowe and Milton, especially because of his tendency to write verse plays, and his vigor.” Walcott in turn admired Brodsky for “his industry, his valor, and his intelligence. He’s a terrific example of someone who is a complete poet, who doesn’t treat poetry as anything else but a very hard job that he does as well as he can.”

Poetry aside, another authority of Russian Jewish origin had less cause to be enchanted with Walcott. In 1982, Henry Rosovsky, then-Dean of the Faculty of Arts and Sciences at Harvard University, admonished Walcott when a Harvard student complained that Walcott, a visiting professor, had proposed an intimate relationship with her and after her refusal, gave her a C grade. According to a history of this and related episodes in American academia, Rosovsky reprimanded Walcott and required him to write an apology to the student. Rosovsky also notified Walcott’s permanent employer Boston University

The conclusion might be that complete empathic identification with others is an ongoing developmental goal, not easily achieved, even by Nobel Prize-winners.