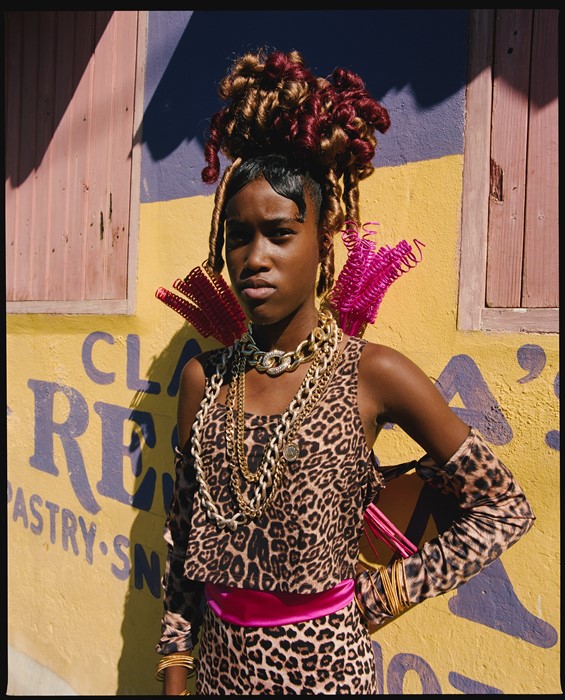 A report by Belle Hutton for AnOther.

A collaboration with hairstylist Jawara, Nadine Ijewere’s new series Tallawah celebrates Jamaicans and their hair. Here, she shares the story behind this highly personal project

A desire to explore her heritage led photographer Nadine Ijewere to travel to Jamaica for the first time in January of last year, embarking on a collaborative project with hairstylist Jawara Wauchope. Ijewere, who is half Jamaican and half Nigerian, had worked in Nigeria before – on a series with stylist Ibrahim Kamara, looking at the country’s youth generation; and in Lagos with Stella McCartney, for example – but never in Jamaica, and was curious to discover more about the Caribbean island. Ijewere and Wauchopetook to Jamaica and south-east London with the aim of capturing the Jamaican community’s idiosyncratic beauty and exploring how they express themselves through their hair. The resulting series, Tallawah, launches this week with an exhibition at London’s Cob Gallery, presented by Dazed Beauty.

Tallawah comprises portraits by Ijewere of Jamaicans of different generations, with dancehall-inspired hairstyles by Wauchope that encapsulate the spirit of the island and its people. “We wanted the series’ title to be a word in patois, something that could describe these beautiful people who loved expressing themselves,” Ijewere says. “Jawara shared a few sayings and we settled on ‘tallawah’ – meaning strong-willed, fearless, not to be underestimated – as it suits them so well.” Prints of some of the images in Tallawah will be available to buy, with proceeds going back to the communities in Jamaica via a charity that helps local women.

Ijewere shoots on film, her portraits showcasing the vibrant colours she and Wauchope encountered while working on Tallawah. Having photographed editorials for publications like British Vogue – her December 2018 cover of Dua Lipa made Ijewere the first woman of colour to shoot the cover of any Vogue magazine – Garage, WSJ, and i-D, she prioritises personal work that is just that: personal to her, that engages with her own sense of culture and identity. When it comes to Tallawah, Ijewere thinks this is only the beginning: “There’s so much more out there to be explored, you can’t document this whole thing in one go. I think it is something we’ll still expand upon – this is almost chapter one if you like.” Here, she explains the story behind the series in further detail.

“Growing up I had a weird relationship with my own hair because I went to grammar schools in the countryside and would straighten my hair to blend in with everyone else. I had black friends and white friends – to my black friends I was ‘so white’, and my white friends would be like ‘you’re an OK black person, you’re not too ‘hood’’, or whatever, and that was always a negative thing. I didn’t know where I stood, which was always weird for me. So for this project, I was looking at hair as something I always struggled with – and I think I still struggle with. Hair is a very personal thing – you can put make-up on and take it off, but hair is always with you. It’s a lot more personal in that way so I think being able to show these hairstyles, textures and colours that Jawara did beautifully was a real eye-opener for me – that it’s OK to be celebrating your hair. And every type of hair is beautiful.

“I’d wanted to work with Jawara for a long time, and we met on a Vogue shoot. He actually asked me if I was Jamaican and I was like ‘how did you know…?’ He said there were some things I did that made him think so. I explained that I’d never really had a place I felt that I could relate to, and how I wanted to do something connected to Jamaica. Jawara grew up between Jamaica and New York, and hair had been a big influence in his life as a young child – seeing women doing amazing things with their hair, and in turn how that’s present in popular culture but the credit isn’t necessarily given back to those women. We both wanted to do something to celebrate beauty out there, that certain type of beauty where it doesn’t matter what age you are.

“I was kind of nervous in the beginning because I had never been to Jamaica before, but it was such a warming experience – I’ve been back three times since, that’s how much I love it. I feel at home and happy there. I think a lot of people come to Jamaica and just shoot in Kingston, but there’s so much more to it. We wanted to get more of the ‘countryside’ type areas and people, because the focus is so often on the cities. So we shot in Port Antonio and Ocho Rios, and then also in south-east London. I was born and raised in London and I felt it important to marry the two different scenarios in which Jawara and I grew up – south-east London is where I’ve been based my whole life, I was born in Peckham and now I live really close to Brixton. It’s a predominantly Jamaican area as well, and we wanted to show that Tallawah is for Jamaicans everywhere.

“Never having been to Jamaica before but knowing that I am from there, the only exposure I really had to it is from the media. I’m guilty of letting the media influence me, I think everyone can be. You always have what the media wants you to think about certain places and people, and quite a lot of it about Jamaica has been negative, especially for Jamaican women. There was a point that really stuck out for me with a woman who we were photographing – she was around 60 years old, and we spoke to her about everything that we were trying to do with the series. She asked us, ‘So the photos aren’t going to go somewhere where there’ll be a caption that refers to us as like gorillas or monkeys or anything like that?’ I was shocked and thought, wow, obviously this is something that has happened in the past. That made me realise even more how important Tallawah is; more things need to be done like this because there has been so much exploitation, people have been taken advantage of and many are afraid to have their photo taken.

“Jawara never just ‘does hair’, it’s very emotive – each hair style or creation has its own story to tell and it’s all inspired by different subcultures in Jamaica, like dancehall. We wanted to do this in a very sensitive way, where we allowed the people we were photographing to express themselves. Jamaica is such a colourful place and people love to wear bright colours and their hair in bright colours – that’s their way of expressing themselves. They want to stand out from the crowd, they want to be unique.”

Tallawah by Nadine Ijewere and Jawara is at Cob Gallery, London, from January 23 – February 1, 2020.