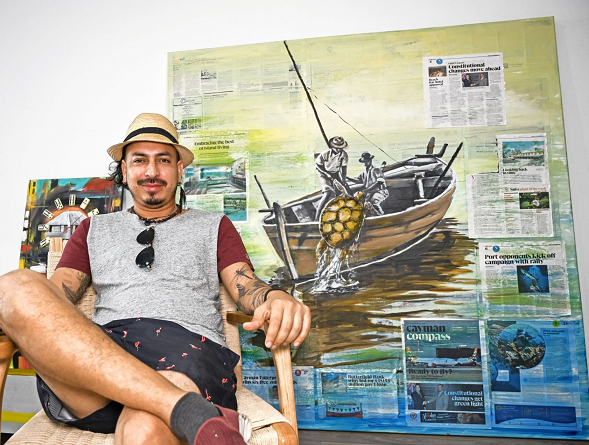 Kayla Young (Cayman Compass) writes about a new exhibition—“Contrast”—by Honduran artist based in Cayman, Carlos Garcia, which opened on Saturday, December 5, at Caymanian Village’s The Space.

Past meets present in the first solo exhibition by local artist Carlos Garcia. The creative best known for his mural work on island, Garcia branches out into his own style for ‘Contrast’, opening Saturday at Caymanian Village’s The Space.

Rather than create the standard, commissioned works directed at tourists, Garcia said he wanted to craft art that would resonate with Cayman Islanders. By recreating vintage photographs, juxtaposed by colourful, contemporary imagery, Garcia hopes to sew a thread connecting past with present.

He describes the show, opening at 7pm, as an “art party” to bring together the island’s creative community. But it is also a chance for locals to reflect on where Cayman has been and where it is going. “I decided to call it contrast because for me it was the perfect word to describe this. It’s like a contrast between colours and black and gray; past, present and future,” Garcia said. “It’s more like a feeling. I think it’s not only me that has this feeling but everybody. It doesn’t matter who on island or where you come from. … We always have this feeling of contrast between what you have now and what you used to have or what you used to see or what you used to feel.”

This contrast between old and new has been a concept Garcia has carried with him since his childhood in Honduras. In his younger years, he lived in the country, where he enjoyed a more rustic way of life. Later, he moved to the city, discovering the hustle and bustle of the larger world. He hopes his art will push viewers to contemplate where they came from, how they got to where they are and where they hope to go.

Many of the paintings in the exhibition capture scenes of old Cayman, including a recreation of a 1950s photograph taken on Shedden Road. “I think some people might say, this painting is where I used to live. I know this road. I know these people. I know what it used to be [like] in this place,” he said.

In another work, men pull a sea turtle into an old catboat. Surrounding the image are newspaper headlines about growth and development in Cayman. His creations are reminders of the island’s root, while recognising the inevitability of change. In a time when Cayman is developing rapidly, he said his art is a gift to the people who call this place home.

[Artist Carlos Garcia at The Space – Photo by Alvaro Serey.]