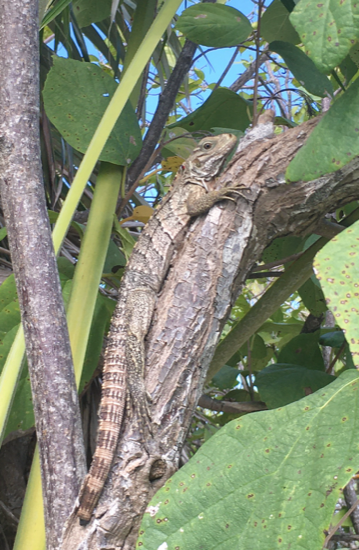 Alvaro Serey (Cayman Compass) informs the public about the Sister Islands Rock Iguana, which continues to be seriously threatened by feral cats and speeding cars. Serey says that “this once-dominant lizard species is struggling to reach adulthood.” Iguana populations are in decline, especially on Little Cayman and Cayman Brac.

In the first species survey since 2015, researchers with the Department of Environment made a concerning discovery about the native iguana populations in Little Cayman and Cayman Brac. “Our preliminary survey results show that we don’t have a lot of animals that are less than three or four years old,” said Jane Haakonsson, a research officer with the DoE’s Terrestrial Resources Unit. “That’s a real problem because that means the babies don’t ever live to be reproductively mature. So, therefore, we’re putting the population through an artificial bottleneck. For a small island population, that’s really critical.”

While the survey results are still being assessed, Haakonsson suspects there has been a population decline. “In November, the team and I went over to Little Cayman to continue our surveying. We hadn’t done it since 2015. There’s been a lot going on. So we’re just really excited to get the results back. Although we fear the population has declined, it’s good to know by how much and why that is,” she said.

Historically, the iguana species lived across large expanses of the islands, foraging forests for food and nesting in coastal areas, the researcher explained. With the pressures of development, the lizards now mostly populate shrublands.

“The rock iguanas used to be the dominant large land animal on all of the West Indies. Of course, that’s no longer the case. So right now, the iguanas live where there is still space for them,” she said. “They didn’t used to have a lot of predators. Only when they were small. So they would outgrow the snakes and they would outgrow the birds eventually. But now, unfortunately, we have a lot of threats. Development is an ongoing thing. But really, for Little Cayman in particular, [it’s] cats and cars – and the same for Cayman Brac.”

If such threats persist unmitigated, Haakonsson warned the population could drop dramatically over time.