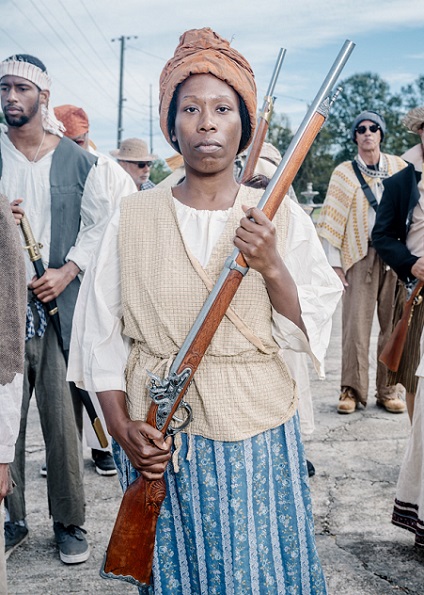 The Slave Rebellion Re-enactment in the title above, organized by Dread Scott, already took place last weekend, November 8 and 9, and I have not yet found reviews of the event. However, I think it is important to point out that none of the articles leading up to the event (at least those I have read so far) have mentioned the importance of Haiti in that major 1811 slave uprising in Louisiana.

The re-enactment in Louisiana was meant to ask people “to think about who the real heroes were in the 19th-Century South,” says Richard Fausset in The New York Times. Here are excerpts below; see the original article with a photo gallery by Wayne Lawrence.

The New York artist Dread Scott was standing in a tiny traffic island in this working-class suburb west of New Orleans on a recent afternoon near the EZ Stop convenience store. He had come to point out a single sentence on a historical marker, one unheeded by the truck drivers barreling down Airline Highway: “Major 1811 slave uprising organized here.”

“That’s the only marker anywhere in the United States, as far as I know,” Mr. Scott said, that mentions the largest slave rebellion in United States history. He gestured toward one of the oncoming trucks, his voice shifting into a sardonic gear: “I’m pretty sure that guy didn’t read it.”

The remedy Mr. Scott is planning, for Nov. 8 and 9, is likely to be the most ambitious artwork thus far in his long career as a radical multidisciplinary artist: A large-scale re-enactment of the 1811 German Coast Uprising, in which as many as 500 enslaved people of African descent marched toward New Orleans from the surrounding sugar plantations in an inspiring, but eventually doomed, effort to win their freedom. “It was a really buried history that a lot of people didn’t know, and it needed to be known.” he said. “And these people were heroes.”

Mr. Scott, 54, first generated widespread notoriety in 1989 as a student at the School of the Art Institute of Chicago with an installation that seemed to encourage viewers to tread on the American flag and led to efforts to amend federal law to make it a crime to display the flag on the ground. In his 27 years in New York he has become a fixture on the gallery scene with works that highlight the plight of the dispossessed and the injustices suffered by his fellow African-Americans.

Like the flag piece, which sent thousands of veterans and other protesters into the streets of Chicago, his planned Louisiana re-enactment, which will be documented by the British filmmaker John Akomfrah, has already managed to seep beyond the art world and into the broader public imagination. Organizers expect 300 or more people of color — teachers, lawyers, artists, students, activists — to participate. Over two days, they will march 26 miles in period costumes, armed with prop machetes and muskets and chanting for their freedom.

Some will be on horseback. Some will carry flags. They will pass near oil refineries and subdivisions and trailer homes along the Mississippi River, creating anachronistic tableaus that Mr. Scott hopes will spur meditations on the modern-day meanings of oppression and crisis.

He hopes it will force people to think about who the real heroes were in the 19th-century South and encourage participants to reflect on their forebears’ bravery and sacrifice.

It already has. “It’s about the way my ancestors were reared — I’d like to see the way they experienced it,” said a re-enactor, Jackie Patterson, 60, an elementary schoolteacher who was standing in the hectic fitting rooms of the project’s costuming department on a recent afternoon. The costuming team had just transformed Ms. Patterson into a plausible 19th-century rebel with a simple skirt, a floral-print shawl and a coppery red tignon, the headwrap women of color wore during that period. [. . .]

[Above (Credit. Wayne Lawrence for The New York Times): Sammi Ross, rehearsing in costume for the 1811 Slave Rebellion Re-enactment, a 26-mile march along former antebellum plantations in Louisiana. Her great-great-grandmother was part of the original slave rebellion. “My family has been taught how to survive through everything,” she said.]