The Puerto Rican astrologer, who died Saturday, left behind a cultural legacy in all of Latin America, where for decades many followed his predictions with devotion.

Ever since I can remember, Walter Mercado was a part of my life and a presence in our household. He was on television shows and radio segments, his smiling photo accompanying the horoscope section of magazines and daily newspapers. “Check Walter’s horoscope” was the answer to many an existential concern. For millions of people in Latin America, the day could not begin without reading or listening to Walter’s predictions. Growing up in Aibonito, a small town surrounded by mountains in the center of Puerto Rico, I was sure that he had a direct line to the stars, and that his job was to translate their wisdom to us. Walter, who died Nov. 2, knew things that we didn’t.

Of course, there were skeptics, but I imagine that some of those who denied his astral authority read him as well. Knowing what Walter had to say was more of a cultural thing than an astrological one — especially since people found much more than a lucky number in his writings. They found hope or at least optimism, thinly veiled in superstition. On a bad day, Walter gave us access to the treasure of imagining a better tomorrow. 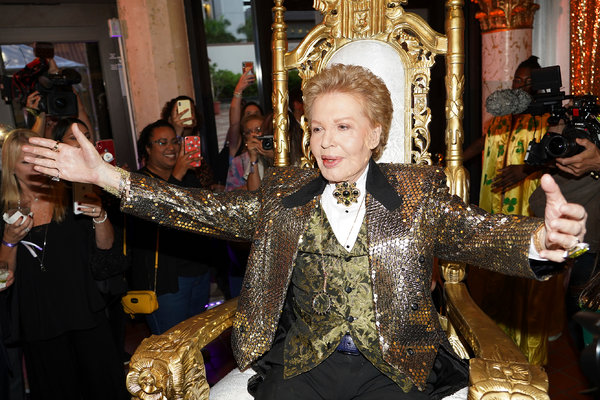 When the new year approached, Walter recommended rituals in the extensive special editions of his horoscopes that ran in newspapers, magazines and on TV all across Latin America, and following them became a tradition that transcended generations, creeds or faiths. Walter would recommend what color to wear, which candles to burn and even what flowers and perfumes to bathe in before the clock struck midnight in order to start the year off right. Alejandro Álvarez, a poet friend of mine, described it perfectly in a Facebook post: “Walter was my grandmother, hiding her Santería from my Pentecostal grandfather.”

Those baths of roses and honey, the rituals with incense, water, plants, rocks and Agua de Florida, in no way seemed to contradict Catholic or Christian devotion, or the many forms of religious syncretism that are part of the daily life of his followers. In the figure of Walter Mercado, the mix of religions and the Santería heritage — so strong in the Caribbean and with its variations and cultural undertones in the rest of Latin America — manifested itself naturally and without clashes. Abuelas who clasped their rosary beads also read Walter.

Walter represented duality in all aspects of his public presence. Masculine and feminine energy, superstition and faith — in him, none of those operated as opposites. He was a man with a powerful voice, who evoked with his words the safety of a protective father to those of us on the other side of the television set. At the same time, his bright silk and sequined clothes and capes, his impressive jewels made of colorful, precious stones and the elegance with which he moved his hands felt like the embrace of a matriarch.

Before becoming the most culturally significant astrologer for Latinos around the world, Walter was a respected and admired dramatic actor, a dancer and an exceptional declamator whose interpretations are part of the Puerto Rican theatrical heritage. Some will say that his public persona, the extravagant and joyful astrologer, was his most accomplished character, an actor’s creation taken to the extreme, resulting in complete fusion between art and life. Perhaps. But Walter’s legacy will forever be the simple creed he always preached as he signed off every show, wishing us “Much peace, but above all, mucho, mucho amor.” For me, there is no greater spiritual truth than that.