A report by Lauren Villagran for El Paso Times.

At the Caribbean Queen restaurant in downtown Juárez, Cuban Tomás Gómez hands down heaping plates of pork, plantains, yellow rice and other comfort foods of the island he left behind. The cooks are Cuban migrants and most of the diners are, too.

A Cuban flag billowing outside the building, just blocks south of the U.S. border, serves as a nod to their new plans.

The Hotel Ursula has housed many Cuban asylum seekers, some of whom have decided to open a Cuban restaurant in the hotel’s ground floor. The Caribbean Queen is run and staffed by Cubans.

As prospects for winning asylum in the U.S. have diminished, thousands of Cubans have decided to make Juárez home, establishing an immigrant enclave in a city that has long been a gateway to the U.S. for migrants and rarely their destination.

Juárez, population 1.3 million, was largely built by people who migrated to the frontier from other parts of Mexico. The city has a reputation for welcoming outsiders. But the arrival of so many migrants at once ― and a U.S.-Mexico accord that has forced asylum seekers to wait in border cities ― has made the newcomers impossible to ignore.

Tomas Gomez takes an order from a waiter at the Caribbean Queen Cuban Restaurant in Juarez. Cuban asylum seekers have been giving temporary work visas in Mexico and can be seen working throughout the city.

Some Juárez residents see an economic boon. Others see more mouths to feed.

“I can tell you that Juarenses welcome foreigners with open arms,” said Jorge Breceda, a law school professor at the Autonomous University of Ciudad Juárez who has studied migration patterns in Mexico. “But in recent years, the nationalist discourse has gotten stronger.”

The Cubans stand out in Juárez, like it or not. 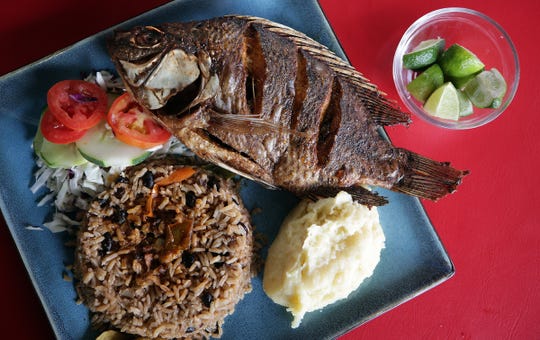 The pescado frito plate from the Caribbean Queen in downtown Juarez. The restaurant is run by Cuban asylum seekers awaiting their hearings in the US.

Their Spanish is unmistakably Caribbean, fast-paced with “R’s” that sound like “L’s” and a tendency to refer to even new acquaintances as mami or papi. They often sport standout Miami style, too: women who dress for the beach, men with gleaming sneakers and artfully ripped jeans — everything brand name.

The 27-year-old waiter at the Caribbean Queen said, “In Cuba, people bring clothes to sell from Russia and Panama. We like to dress like reggaeton artists.”

Ya tu sabes. You know.

“There is no way to ignore them,” said Enrique Valenzuela, director of a state migrant aid center in downtown Juárez, “because they are outspoken.”

For months, Valenzuela often found himself surrounded by Cubans who would gather in the shade of the center’s courtyard and press him for news of U.S. policy changes, wondering what each shift could mean for their place on the wait list to claim asylum.

They don’t gather there much anymore.

About 15,000 people have been returned to Juárez under the “Remain in Mexico” program that forces asylum seekers to await court dates in Mexican border cities, Valenzuela said. Increasingly, they are choosing not to show up for their court dates. 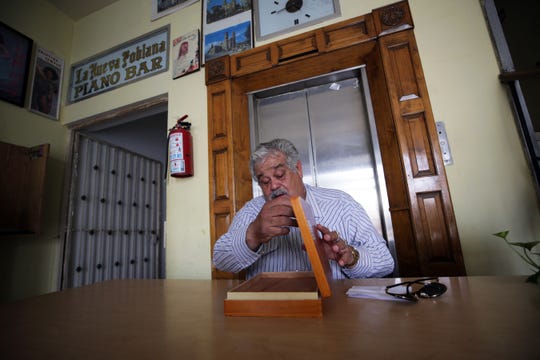 Enrique Aguilera, owner of the Hotel Ursula and two other hotels in downtown Juarez says his hotels see a lot of business from Cuban and Central American asylum seekers. He has a basement where they can sleep for 80 pesos, or $4 per night.

About a third of those returned have gone back to their home countries, Valenzuela said. Another third are in limbo, evaluating whether to go home, continue their process or cross illegally. And a third — many of them Cuban — are settling into life in Juárez.

“Little by little, they’re coming to know Juárez,” he said. “It’s not the hell the media makes it out to be. This is a community of hard workers.”

Behind the counter at the Caribbean Queen, Gómez, 50, wears a cherry red apron and expedites orders. He arrived in Juárez eight months ago, waited his turn to claim asylum in the U.S. and was sent back to await court dates. He attended two hearings but has decided to quit the process. 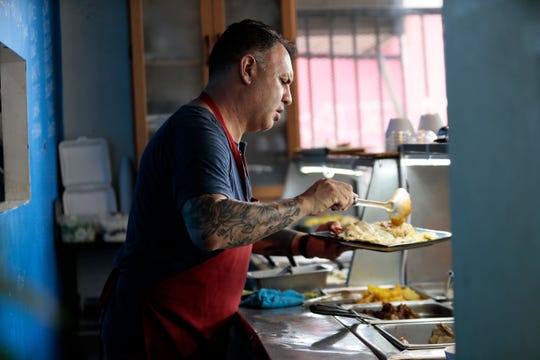 Tomas Gomez has decided to stay in Juarez where he runs the Caribbean Queen Restaurant; a Cuban restaurant just off the Juarez strip. Cuban asylum seekers cram in to the restaurant throughout the day hungry for the flavors of home.

“Honestly, I gave up,” he said, taking a break after the lunch rush. “I am staying here and applying for residency. Not just me, but a lot of us are doing that. Because the truth is they are deporting many of our people. It’s a real risk.”

Cubans largely lost their special status in the U.S. in 2017, when the Obama administration ended the so-called “wet foot/dry foot” policy that had long allowed Cubans a chance at life in the U.S. if they could make it to U.S. shores.

In June, Cubans became subject to the “Remain in Mexico” program and began waiting in Juárez, months at a time, for their chance to justify their asylum claim before a judge.

In the meantime, as immigrants have often done in U.S. cities and towns, the Cubans have stoked the economy by shopping, starting businesses and creating jobs.

There is a perception in Juárez that the Cubans are better financed than other migrants, although data is hard to come by and not everyone’s circumstance is the same.

“It’s a combination of private funds that they may have been able to accumulate, but my guess is that the larger share is money sent from Miami by relatives that already live here,” said Jorge Duany, director of the Cuban Research Institute at Florida International University.

Cubans in the U.S. sent nearly $3.6 billion in remittances to the island in 2017, according to the Florida-based Havana Consulting Group, a market research firm.

Migrants from El Salvador, Honduras and Guatemala are more likely to be traveling with children in tow — often a single adult with one child — leaving them more vulnerable, less able to work and more likely to stay in one of the city’s 17 shelters.

With support from family in the U.S. or a job in Juárez, the Cubans have filled hotels downtown that had fallen into disrepair. They have rented houses in central neighborhoods still spotted with homes abandoned during the worst years of drug violence. They have established at least three restaurants in the historic center.

Armando Prieto manages the famous Kentucky Club bar on the Strip, a favorite of El Pasoans and tourists who come to Juárez for the nightlife. Cubans have warmed to the spot, too, he said. 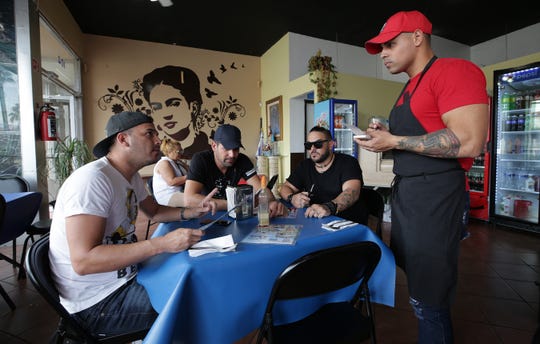 Cuban asylum seeker Fernando Calana works as a waiter at the Caribbean Queen, a Cuban restaurant in downtonwn Juarez. Other Cubans awaiting hearings in the US frequent the restaurant looking for the taste of home.

“They have boosted the economy downtown,” Prieto said. “Some have started businesses and moved into houses. They’re going to make a life here.”

‘Empathize and have patience’

On a nearby corner of the Strip, Manny Hernandez sells burritos at a food stand decorated with the Dallas Cowboys logo. He is wary of the newcomers.

“They don’t eat what we eat,” he said. “They don’t get along with Mexican people. They get in a little group by themselves. A lot of people don’t like them here.”

Others offered a warm welcome — with a condition.

“This is a city that always has work for everyone,” said Lolis Rocha, consultant to a coffee shop downtown. “Whatever work you want to do, you’ll find it here. That’s where I get a little annoyed. There are people who are coming looking for a handout, who want us to help them, when they could also look for work.”

A chain convenience store across the street has hired five Cuban employees, all of whom are working on temporary permits issued by the Mexican government to migrants who have been returned to Juárez under “Remain in Mexico.”

“The Cubans are trying to integrate,” said Rosario Cazares, an assistant manager at the corner store. “It’s the Mexicans who aren’t integrating the Cubans.”

“Here at the store, Mexicans treat the Cubans badly sometimes,” she said. “There is ― how do you say it ― discrimination. They speak differently. But we Mexicans need to try to understand them and empathize and have patience. They’re searching for a better life than what they had in their country.” 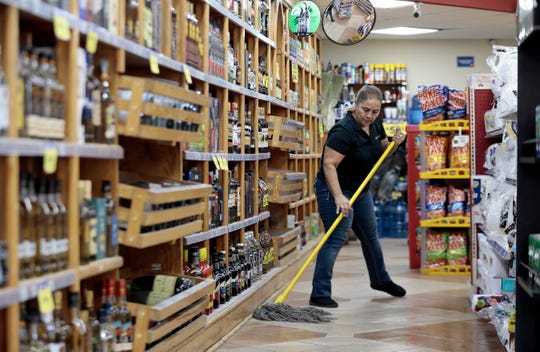 Cuban asylum seeker Miladys Moreira Perez works in a convenience store in downtown Juarez as she awaits her hearings in the US. She works seven days a week.

Miladys Moreira Perez, 48, arrived in Juárez in March with hopes of seeking asylum in the U.S. Now she works seven days a week at the corner store, stocking shelves and packing six-packs of Tecate in ice-filled plastic bags for customers. 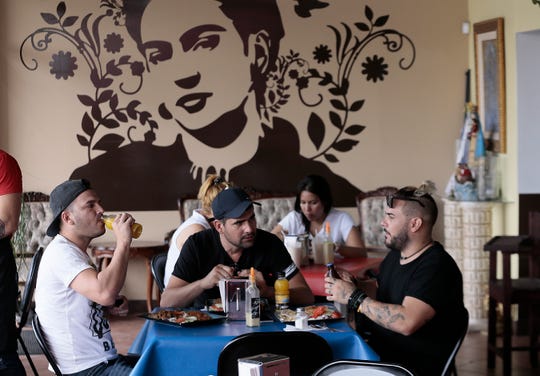 The Caribbean Queen Restaurant in downtown Juarez is run by Cuban asylum seekers. Many of the restaurantâ€™s customers are also Cubans awaiting their hearings in the US.

She is trying to make a life in Juárez, she said, but she is afraid to venture out beyond work, home and her circle of Cuban friends she met during the journey through Panama, Central America and Mexico.

She said she was robbed of her phone and money shortly after arriving in Juárez.

“I don’t go out at night, because I know it’s dangerous,” she said. “In the day, I hurry to work. People say it’s a dangerous city. I want to get home in one piece.”

There were 1,143 murders in Juárez in the first nine months of the year, and homicides have been climbing for the past four years. 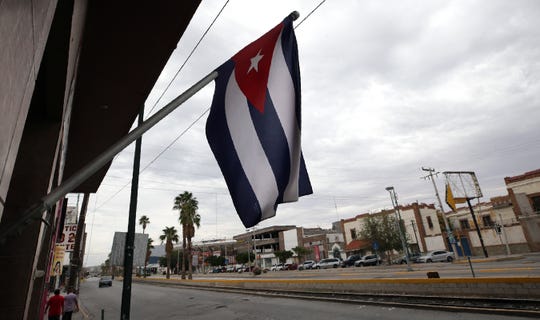 A Cuban flag flies outside the Caribbean Queen Restaurant in downtown Juarez.

The state prosecutor’s office says it has received few reports of crimes against migrants, but attorneys and advocates for those who are awaiting their court dates in the U.S. say migrants are vulnerable to assaults and theft and are often reluctant to report the crimes  to Mexican authorities.

From culture clash to melting pot

Mexico has cracked down on its southern border, so the number of migrants arriving in recent months has dwindled. Still, Cubans continue to make the trek north.

The state migrant aid center registered 77 people in August and 67 people in September on the asylum wait list that during the summer swelled by the thousands each month, reaching 18,878 by late September.

The melting pot of what is Cuban and what is Mexican is already evident in downtown Juárez: from the Cohiba cigar stuck in the mouth of a mannequin that guards the entrance to the Hotel Ursula, to the burrito joint on the Strip that now also sells Cuban food, to the sounds of Mexican crooner Juan Gabriel in the Caribbean Queen restaurant.

“We’re a community made up of migrants,” Valenzuela said. “We are accustomed to diversity here. And, yeah, their accent might be different but we love salsa music.”