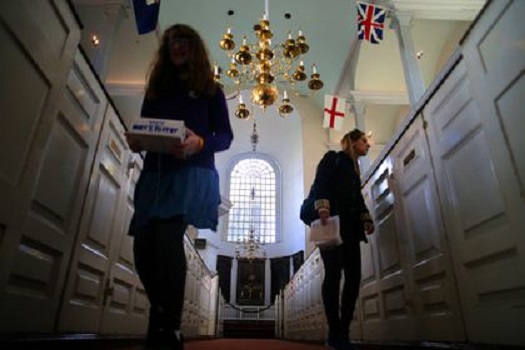 [Many thanks to Dale Battistoli for bringing this item to our attention.] Brian MacQuarrie (The Boston Globe) writes about Old North Church and its less laudable past. According to the article, research shows that the Boston slave traders who attended Old North “were deeply entwined in a slave-smuggling ring that shipped captive Africans from the British West Indies to notorious Dutch plantations in South America.” Some of these parishioners have been linked to a 1743 voyage in the Caribbean that smuggled an estimated 60 slaves from the British colony of Barbados to a Dutch port in Suriname. Read the original article at The Boston Globe.

The slender white steeple of Old North Church is a cherished symbol of American freedom, the place where two signal lanterns dispatched Paul Revere on his famous 1775 ride to warn the colonists of approaching British troops.

But it’s also a symbol of something else — an American reckoning.

New research shows that Boston slave traders who attended Old North helped build that iconic steeple, and that those parishioners were deeply entwined in a slave-smuggling ring that shipped captive Africans from the British West Indies to notorious Dutch plantations in South America.

Startled by this discovery, the leadership at Old North plans to revamp the tours there, change interpretive signs, and ensure that the 150,000 yearly visitors to this Episcopal church have an opportunity to learn about these newly unearthed connections to Colonial slavery. “We’re here to teach about freedom,” said the Rev. Stephen Ayres, the vicar at Old North. “It didn’t happen only on one night when a couple of lanterns were hung in the steeple.”

For dozens of slaves shackled in a schooner captained by Old North parishioner Newark Jackson, freedom was never an option. According to research findings announced recently, Jackson and two other Old North congregants have been linked to a 1743 voyage in the Caribbean that smuggled an estimated 60 slaves from the British colony of Barbados to a Dutch port in Suriname.

“I was distressed on so many levels,” said Catherine Matthews, the codirector of education at Old North Church & Historic Site. The Old North revelation is the latest reckoning with slavery to confront many American institutions and historic sites. In Washington, Georgetown University is studying the connections between slavery and its Jesuit founders who owned slaves. Last week, Princeton Theological Seminary in New Jersey pledged $27 million in scholarships and other efforts as reparations for its ties to slavery.

In Boston, an artist who proposed a memorial in the shape of an auction block at Faneuil Hall, named for slaveholder Peter Faneuil, pulled out of the project this year after objections from the local chapter of the NAACP. The city and National Park Service, however, are partnering to display archeological artifacts at Faneuil Hall that highlight the city’s early maritime history and its links to slavery.

At Old North Church, Newark Jackson’s name had long been familiar to Ayres and tourists who visit Captain Jackson’s Historic Chocolate Shop, which opened in 2013 and is owned by the Old North Foundation. Until recently, Jackson’s legacy had been that of a well-regarded parishioner who traded in exotic chocolate from Suriname and sold it in the North End near the reimagined shop that bears his name. But because of painstaking research by a former Boston College doctoral student, a starkly different picture of Jackson has emerged.

And that version of Jackson — a deeply indebted merchant who schemed with other Old North congregants to traffic in human beings — has compelled Ayres and others to re-tell the church’s story.

“How do we need to reshape our interpretation?” Ayres asked. For one, he added, “it’s probably appropriate not to call it Captain Jackson’s Chocolate Shop. The flip side of that is we don’t want to be accused of hiding the story.”

A commemorative sign in Old North’s pew 13, where Jackson sat at services, will be replaced with updated findings about the slave trader, Ayres said. At the chocolate shop, a popular tourist stop, Old North is reviewing references to Jackson displayed both inside and outside the red-brick building. “We feel that it’s our responsibility to tell the story — all of the story — that relates to our site and history,” Matthews said. “We feel strongly that we need to look honestly at our past in order to plan for our present and future.”

That past includes a pact by Jackson and fellow parishioners George Ledain and Edward Tothill to smuggle slaves illegally from Barbados to Suriname, according to Jared Ross Hardesty, the former BC doctoral student who now teaches history at Western Washington University. What made the trip illegal was a prohibition on British subjects from trading outside the British Empire. Meanwhile, the Dutch West India Company held a monopoly on all slave trading in Suriname.

Jackson, Ledain, and Tothill — who was working in Suriname as a shipping agent — all donated to erect Old North’s steeple, which has since been replaced by a close replica. The largest contribution for the bells came from Gedney Clarke, a Salem native who had moved to Barbados, masterminded the voyage to Suriname, and eventually became fabulously wealthy.

Centuries after the voyage, the long-forgotten details of their enterprise surfaced serendipitously.

Ayres reached out to Hardesty after reading “Unfreedom,” his 2016 book on Boston and slavery in which Jackson was mentioned. Hardesty was asked by Ayres to do more research, which was funded by grants from the Mars Foundation and the National Park Service. During that work, Hardesty found a treasure trove of Dutch colonial records about three mutineers of mixed race who murdered Jackson and Ledain shortly after leaving Suriname.

After the ship was recovered by Dutch authorities, a cargo inventory showed 15 slaves — 13 children and two adults — who had not been off-loaded and sold. They would have been “remainders,” Hardesty said, or unusable commodities in an economy that often worked its slaves to death rather than rely on reproduction. “I was expecting to find one or two people, but here we have 15,” Hardesty said. “That was probably the eye-opening moment for me. I’m a specialist in this stuff, and I’m still shocked.”

The importance of the discovery lies not in the long-established fact that Boston benefited from slavery, Hardesty said. The city’s vibrant Colonial economy was inextricably tied to provisioning the plantations of the West Indies and trafficking slaves within the Americas, and the wealth of many of Boston’s early families was born from this trade. Instead, the findings are one more indicator of how pervasive those links had been, and that even seemingly respectable, church-going people sought to profit from slavery.

Hardesty announced the findings publicly earlier this month at Old North. Nearly three centuries later, the new information still seems startling in a city where 19th-century abolitionists helped lead the fight to end slavery in the United States. In the 1740s, about 10 percent of Boston’s population consisted of people of color, and the vast majority of them were slaves. “You couldn’t walk the streets without seeing an enslaved person,” Hardesty said.

Slavery was finally abolished in Massachusetts in 1783.

Tour leaders at Old North have received additional training in the region’s African-American history, said Elon Cook Lee, who is program director and curator at The Center for Reconciliation in Providence, a nonprofit organization that explores the history and legacy of slavery.

More institutions and historic sites need to undertake this research, Lee said. “It’s necessary,” she said. “The United States is ever increasingly racially and ethnically diverse, and all historic sites have got to change the stories they’re telling.”

That work is beginning anew at Old North. “This is what we want to be doing,” Ayres said.