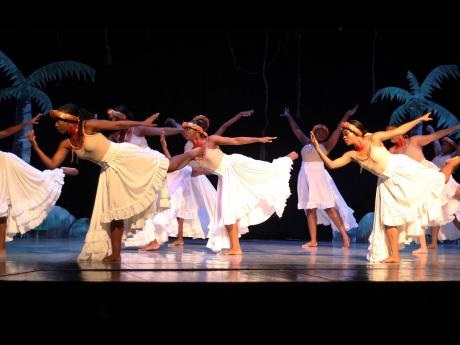 In “A Jaw-Dropping 24th Xaymaca Season—Dance Theatre Pulls Out All The Stops For Its Audience,” Stephanie Lyew (Jamaica Gleaner) reviews Dance Theatre Xaymaca and its 24th season of dance:

Dance Theatre Xaymaca is always a dynamic show full of energetic dancers combining drama with multiple genres of music. The company’s artistic director, Barbara McDaniel, seems to have set for her shooting stars new tests for the 24th Season of Dance – the first season where public auditions were actually held – to present timeless pieces and challenge the minds of the audience with message-filled movements.

After a slight delay, live percussionists Job Clarke, Rueul Phillips and Ramoy Rodriguez arranged their tools and hit the rhythm on its head signalling the start of a cosmic show. The Little Theatre’s deep-red curtains were raised to display dancers dressed in earth tones and white already in motion for the ‘Taino Memoirs’ piece, choreographed by Onaje Bell.

It was only the first of nine pieces but from the moment the dancers took to the stage, it was evident that they had spent countless hours honing their craft. Each member of the gifted cast had strong stage presence and perfect cohesion, while never missing a beat – elements that may appear simple but are devilishly complicated said Catherine Reid, who played the roles of dancer and choreographer for this season. “Some of the cast members were fairly new, so part of our rehearsals included working on the chemistry to create a show that not only had strong dancers but emotions and bonds,” Reid told The Gleaner.

Reid was particularly pleased with the harmony of ‘Inna Di Crossfire’, which she originally choreographed for the University Dance Society earlier this year and remounted for Dance Theatre Xaymaca to showcase what she describes as “the street coming to stage in an authentic way” during which the audience experienced some jaw-dropping moments. Dubplates and specials from popular Jamaican sound system Stone Love; Vybz Kartel’s earlier tracks; and some of the latest selections from dancehall big-timers Chronic Law, Alkaline, Spice and Aidonia served as the soundtrack for the striking ‘dash-out’ and revolution of waists by female dancers dressed as dancehall queens.

The somewhat risk-taking choreography and concept that showed the feel-good to aggressive moods of dancehall, Reid said, “Some people may say it shouldn’t be staged, but it was basically an exploration of a storyline that is part of popular music and part of everyone’s lives, from corporate to street businessmen and women, the vendors, the artistes, the sound systems and, of course, it is the livelihood of many dancers.” Cast members were all given their moment to shine, with incredible solo and duet pieces as well as front-stage appearance at one point or another, but while they were all incredibly brilliant in their own way, the standout moments came in the duets.

The choreography of Kimberly Stewart and Orrette Beckford in ‘Glorious Days’, although deeply old-fashioned, was of four remounted pieces done with love. The other, ‘Duakhamba’, by the company’s associate artistic director, Natalie Gallimore, put the physical strengths of Brittany Bryan and Cailia Adams on show as they gracefully navigated the prop, a tripod pole structure, their limbs unfolding into unbelievable planes that challenge any human body.

An almost breathless Bryan recounted her hardest moments. “The energy to climb the pole to the top while maintaining the dramatic presentation and moving in sync with Cailia was brutal, and still, it was smooth sailing, proving that the gruelling rehearsals paid off.”

She added, “There are internal forces of the company that help to bring the energy out, especially for me, who balances school, studying medicine at UWI, and dance. This season is definitely rewarding.”

Whether trained in the language of dance or just appreciative of the expression of art, Dance Theatre Xaymaca’s 24th Season of Dance is one that leaves every spectator in deep thought, even if it’s with their eyes and mouths wide open.

[Photo above by Stephanie Lyew: “The ‘Taino Memoirs’ dancers stay true to form and to the beat of the drums that act as the music for the piece.”]