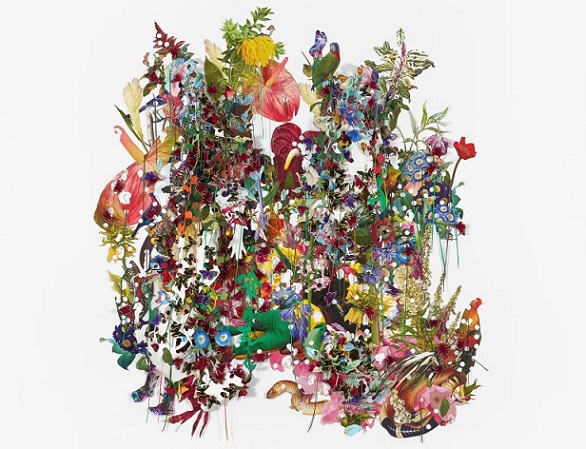 Description: Hales is delighted to announce …to dig between the cuts, beneath the leaves, below the soil…, an exhibition of recent works by Ebony G. Patterson (b. 1981 Kingston, Jamaica). In her first solo exhibition with the gallery, Patterson continues with her exploration of gardens, an essential arc of her practice. This exhibition comprises of a new series of monumental paper collages which take their departure from Patterson’s celebrated touring solo exhibition, …while the dew is still on the roses…, which first opened at Pérez Museum of Art Miami (November 2018), and is currently on view at Speed Art Museum, Louisville, KY (through January 5, 2020).

Patterson began working on the collages in this exhibition in her studio in Jamaica, before completing them on a residency at Crystal Bridges Museum of American Art, AR, in 2019. Alongside this studio-based series, the artist has been planting a physical garden as a test site, inspired by the poisonous garden at Alnwick castle, UK. Patterson has planted with no regard for traditional hierarchy, instead allowing poisonous plants to grow alongside those with healing properties – thereby becoming a garden of survival.

In Patterson’s work, she explores the idea of the garden as both real and imagined, in relation to the procurement and legacies of postcolonial space: “I am interested in how gardens – natural but cultivated settings – operate with social demarcations. I investigate their relationship to beauty, dress, class, race, the body, land and death.” (Ebony G. Patterson, 2018)

For …to dig between the cuts, beneath the leaves, below the soil…, the artist has moved into the undergrowth of a garden gone awry. Luscious, bright plants bursting with untameable life lure the viewer closer. Amidst the vegetation, objects are unearthed – discarded shoes and children’s toys create an uncanny feeling, whilst beneath the leaves are twinkling eyes and silhouetted limbs. With an eerie absence of a body, the scene slowly reveals itself as ominous.

Patterson states that she uses beauty as a tool to trap the viewer ‘physically, psychologically and emotionally’ in an intricate and seducing composition. Shrouding figures almost completely – there is a presence of bodies no longer there, raising pertinent questions about the those who are not visible. People become memorialized in Patterson’s gardens – each piece is a marker for bodies overlooked. Life fervently continues, and those who live in the garden persist in finding ways to survive.

With the sensibility of a painter, Patterson works across multiple media, consistent in her visual language and intention. Here, she revisits paper, refining her use of embellishment, while still seeking the ‘shine’ aspect of her work in order to draw attention to political concerns. The rich collages resonate with earlier tapestries – no longer restricted by a distinct frame, the works sprawl outwards. The open-ended quality of each piece is reflected in the poeticism of their titles, which come to Patterson while she is creating the work. Her use of ellipses references the nature of remembering, piecing together fragments of truth. Holes, cuts and tears puncture the surface of the paper, implying a violent act, reminiscent of gun shots fired. The ground is both image and skin, perforations and negotiating lines reveal an absence.

In this latest series, Patterson has distilled her imagery – the symbolism has more subtlety, but the gravitas remains. Studio photography is combined with scanned images sourced from botanical tomes and animal anatomy books, as well as fake butterflies and real moth specimens. Drawing on the tradition of vanitas and memento mori, there are biblical references to themes of betrayal and death in animal form.

In …to dig between the cuts, beneath the leaves, below the soil… Patterson continues to deftly combine splendor with danger. Framing the garden as an active site of power, Patterson explores it as a metaphor for postcolonial space and an extension of the body. Juxtaposing visibility and invisibility; death and survival, Patterson’s works remain filled with an overwhelming sense of hope – in the toughest of circumstances, life will always grow. [. . .]