A report by James Wood for The Daily Mail.

Reggae superstar Bob Marley has today been honoured with an English Heritage blue plaque, marking the address where he and his band the Wailers lived in 1977.

During his time in Chelsea, west London, Marley and his band finished recording their famous album Exodus, which featured some of their biggest hits, including Jamming, Three Little Birds and One Love.

The plaque at 42 Oakley Street has been in the planning process for a long time, because Marley was not registered in phone directories or electoral registers – an issue which is common among historical figures of colour.

Out of more than 900 blue plaques across London, only four per cent are dedicated to black and Asian individuals. 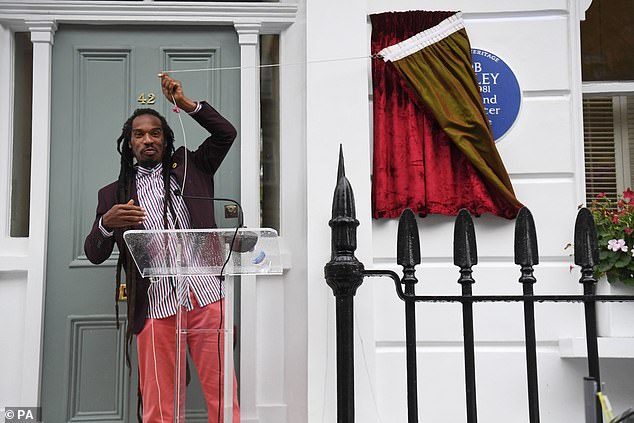 While living at the house in Chelsea (right), Bob Marley (left) and his band finished recording their famous album Exodus, which featured some of their biggest hits, including Jamming, Three Little Birds and One Love

Blue plaques commemorate the link between a location and an individual who was regarded as ’eminent’ in their field (pictured, Bob Marley’s plaque unveiled today)

In 2015 English Heritage, which manages more than 400 historic buildings and cultural sites across the country, established a working group to reinvestigate the addresses of noted ethnic minority figures.

Research by English Heritage revealed a court record of Marley’s arrest for cannabis possession in 1977.

Though he gave a different address, it is speculated that Marley did so to prevent the police from searching the house in Oakley Street – where his band-mates were staying – for drugs.

Other anecdotal reports from witnesses suggested the house was the band’s headquarters and Marley’s primary address.

The plaque was unveiled by Rastafarian writer and poet Benjamin Zephaniah and introduced by historian and broadcaster David Olusoga, who is also a blue plaque panel member. 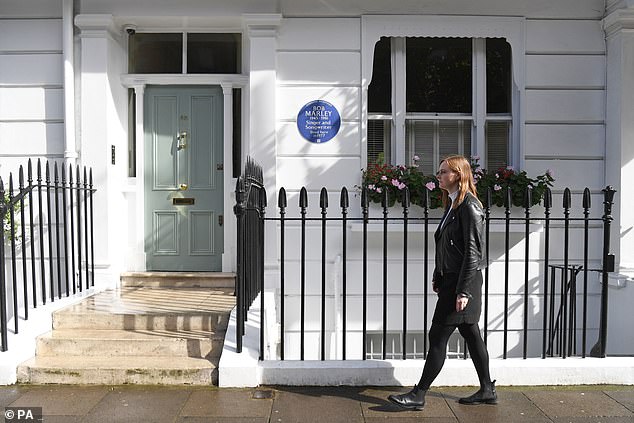 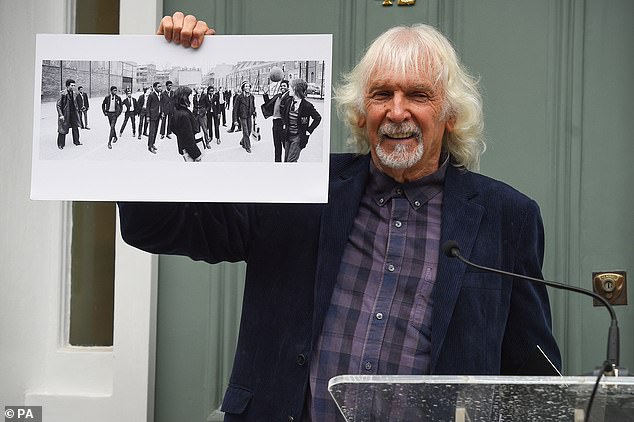 Artist Keith Baugh shows old photographs of Bob Marley at the unveiling of an English Heritage blue plague for the singer, at his former home in Chelsea.

Zephaniah, said: ‘It’s very difficult to say what Bob Marley would have said about this plaque, but he did once say, “Live for yourself, you will live in vain, live for others, and you will live again”, so I’m quite sure he would say that this is for his people and his music.’

Blue plaques commemorate the link between a location and an individual who was regarded as ’eminent’ in their field.

Their achievements should have made an ‘exceptional impact in terms of public recognition’, and they must have been dead for at least 20 years.

Other musicians to have received the honour include John Lennon, Freddie Mercury and Mozart.

During his time at the house, Marley and his bandmates often played football at the pitches in nearby Battersea Park.

Marley left Jamaica at the end of 1976, eventually spending two years in England and completing Exodus as well as follow-up album Kaya.

Exodus stayed on the album charts in the UK for 56 weeks in a row, spawning the hit singles Exodus, Waiting in Vain, Jamming and One Love.

The Jamaican icon was also arrested during his stay in London and convicted for possessing a small quantity of cannabis.

Marley performed at the Crystal Palace Bowl on June 7, 1980 while gravely ill. It would prove to be his last appearance in the UK, with the legendary musician dying less then a year later.

The cultural icon already has two blue plaques in London, including at a house he stayed at in Neasden, north west London, and Flat 34 Ridgmount Gardens in central London, the place where he first stayed in the capital.

Mr Olusoga, English Heritage trustee and blue plaques panel member, said: ‘Bob Marley was the first superstar to emerge from the developing world. More than a brilliant musician, he became a cultural icon who blazed a trail for other black artists.’

Traveller and diplomat Gertrude Bell and novelist Angela Carter are among several other famous figures commemorated with blue plaques this year.

Mr Olusoga added: ‘From engineering to music, this year’s blue plaques remind us of the enormous range of human achievement.

‘All of our blue plaque recipients called London home, at least for a while, and our plaques are a testament to the creativity and variety of this city.’