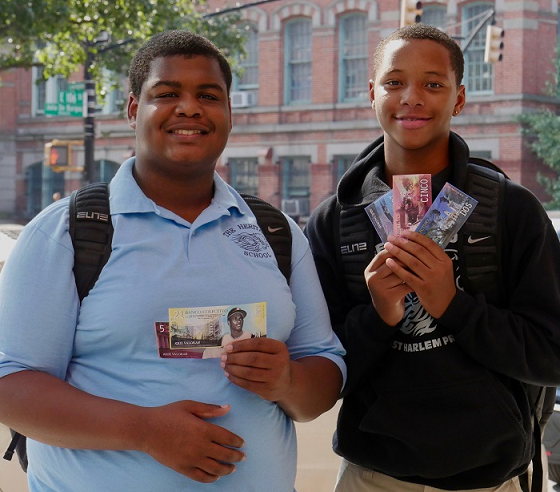 We have previously shared news about Valor y Cambio (Value and Change), the community currency initiative meant to transform the ways in which people relate to wealth and to building sustainable communities. [See Pesos de Puerto Rico and The Art and Politics of Valor y Cambio.] Now, the project will be presented in East Harlem this weekend before moving on to finish its month-long tour on September 30 at the financial center of New York city—Wall Street—to ignite a conversation about what New Yorkers value, and about the value of unheard voices and communities. Look out for “Valor y Cambio” on September 27-29 (including the Asamblea de Pueblo event on September 27) at La Marqueta Retoña, located at 1590 Park Avenue, and “ATM at Wall Street” on September 30 (this will be the last day to use Pesos de Puerto Rico in NYC’s participating establishments). See press release:

Valor y Cambio (Value and Change), an interactive art installation and storytelling project designed to foster stronger communities and more equitable economies in Puerto Rico and the United States, launched its last leg of its mainland tour at New York City’s East Harlem, El Barrio. The initiative, which kicked off on September 21th, 2019 at El Museo del Barrio, and culminates on September 30th, 2019, includes partnerships with local businesses and other establishments such as El Barrio’s Artspace PS109, Taller Boricua, and La Marqueta Retoña that will accept the alternative currency for a wide variety of products, services, and fun activities while bringing awareness to important issues affecting communities locally and globally.

The tour comes as New York City’s income disparities continue to increase, and as the city struggles with the forces of gentrification, school segregation and cultural inequity–all issues that have the greatest impact on the lives of people of color and underserved communities.

The brainchild of the project, artist and scholar Frances Negrón-Muntaner in collaboration with Sarabel Santos Negrón, offer a space for participants to reimagine their city and community’s trajectory. “By asking ‘what do you value’,” comments Negrón-Muntaner, “Valor y Cambio provides a platform to reflect on how these values can be the basis of new economies focused on collective wellbeing. It is through questioning and dialogue that we can expand our sense of the possible and take actions that alter local communities and eventually the world.”

The project initially emerged in response to the debt crisis affecting the creators’ homeland of Puerto Rico and other locations throughout the world. Building on the research of Unpayable Debt, a working group at Columbia University led by Negrón-Muntaner, she launched the project this past February 2019 in Puerto Rico before moving stateside. Following a successful run on the island, Negrón-Muntaner brought the project to the Lower East Side at the Loisaida Cultural Center before moving to El Barrio. Both communities have not only been deeply impacted by the socio- economic changes New York City lives today but are also bastions of the Puerto Rican diaspora stateside. For decades, East Harlem was the largest Puerto Rican community in the US, and today still holds one of the highest concentrations of Puerto Ricans outside of the island. Still the home of some of the most iconic Puerto Rican institutions, many of which will be part of this initiative, El Barrio was also the site of early political organizing and community-building. Because of this, East Harlem offered the ideal place to close the project’s stateside run.

To date, nearly 2000 people in Puerto Rico and New York have shared their story of what they value and how to bring about change. Users of the currency in East Harlem get to experience how communities can better build economies centered on people’s well-being; to live a different conception of wealth based not on extraction and profit, but full access to education, environmental protection, and racial and gender equity, among other fundamentals.

The installation’s currency is available through a refurbished travelling ATM called VyC. During its tour, the machine installation will move 4 times which started at El Museo del Barrio. It will follow the 5-day stint there with a tour through Taller Boricua (at the Julia de Burgos Performance and Arts Center), La Marqueta and El Barrio’s Artspace PS109. Each participating organization is also hosting community events open to the public for visits, and offering programming aligned with the project. The experience is quite interactive, as the machine asks participants to record what they value and gives them a currency and art piece, the pesos of Puerto Rico, in exchange for their responses. The pesos denominations range from 1 to 25 and feature the stories of poets, athletes, doctors, activists, educators, and youth leaders. Select partner businesses and organizations in NYC will accept the pesos in exchange for several different items, which range from food and museum tickets to a cup of joe.

After its run at El Barrio, Valor y Cambio returns to Puerto Rico to complete its one-year installation tour. Subsequently, the project will issue a report; will be part of a major exhibit at the Museum of Modern Art in Puerto Rico, and later in 2020 will release the Valor y Cambio documentary that will delve deeper into the issues local communities face when trying to build sustainability amidst gentrification, displacement and globalization. For details about the project, historical figures featured on the bills, and social currencies around the world, visit www.valorycambio.org.