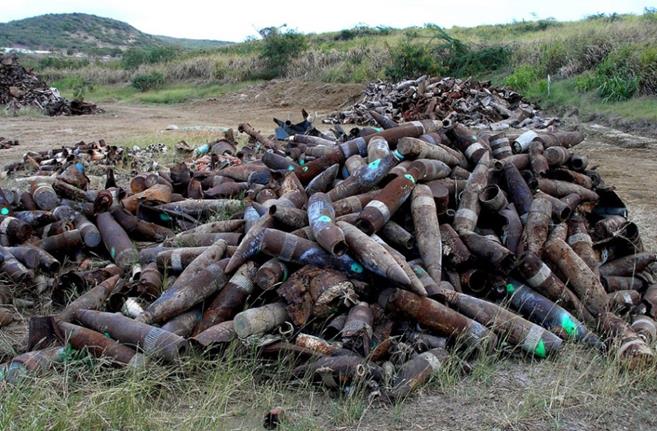 Vidas Viequenses Valen and the RootsAction.org team has sent out a petition to ensure support for the use of closed detonation chambers in Vieques, Puerto Rico, where the U.S. government is cleaning up the toxic waste left on the island after decades of bombing practice. Here is the English-language version of the letter sent out by RootsAction to demand approval for the purchase and deployment of closed detonation chambers. This measure—in a version of the National Defense Authorization Act—has been approved by House of Representatives but not by the Senate. See below for a list groups endorsing this petition and a link to the original article published in 80grados.

The U.S. government is cleaning up the toxic mess left on the island of Vieques, Puerto Rico—after decades of bombing practice—by finding unexploded ordnance and blowing it up in the open air, adding to, rather than diminishing health risks. Similar clean-ups elsewhere in the United States are using closed detonation chambers.

The Good News: The House of Representatives approved a version of the National Defense Authorization Act that includes $10 million to purchase and deploy closed detonation chambers in Vieques, a measure introduced by Congresswoman Alexandria Ocasio-Cortez.

The Bad News: The Senate’s version of the National Defense Authorization Act does not include a similar provision.

The two versions are to be reconciled by a Conference Committee over the next few weeks. Your email to Congress  will help ensure that the final version of the bill includes the funds for the use of closed detonation chambers in Vieques, and thus saves lives.

For 60 years the U.S. Navy used the Puerto Rican island-municipality of Vieques, home to 9,300 U.S. citizens, to practice ship-to-shore and air-to-ground bombing, as well as mock invasions. The Navy has admitted to using napalm, depleted uranium, and other very toxic chemicals.

Thus, not only are the soil and groundwater heavily contaminated, but there are thousands of bombs that failed to detonate. After the Navy stopped operations in Vieques in 2003, the former bombing site was found to be contaminated by known carcinogens and other toxins such as depleted uranium, mercury, lead, arsenic, cadmium, and napalm. This led to the area being designated a Superfund clean-up site on the U.S. National Priorities List.

Over the past 16 years the “cleanup” has consisted largely of open air burning and detonation of unexploded ordnance (UXO). Because the people of Vieques live only a few miles downwind from where UXO is detonated, the toxins are carried to the populated areas. Click here to help make sure this changes.

There is no hospital on Vieques Island to handle the health crisis caused by the military’s contamination, and exacerbated by the current practices of open burning and open detonations of munitions. Click here to tell Congress to finally clean up Vieques the right way.

Currently cleanups of over a dozen similarly contaminated sites in the U.S. use closed detonation chambers to detonate UXO without spreading the toxins. A report from the Congressional Research Service has found that closed detonation methods are effective at containing pollutants and toxic emissions during military cleanup efforts. A January 2019 report from the National Academy of Sciences agreed.

The U.S. government spends, across numerous departments and agencies, about $1.25 trillion a year on militarism. If you think it can and must find 0.0008 percent of that to engage in a serious clean-up of Vieques that doesn’t make matters worse, click here.

To add your name to the petition, you may also write to Kathy Gannett at kbg00765@gmail.com