A report by Alexandra A. Taylor for C & En.

In the North Atlantic, there’s a region called a floating rain forest because of its incredible biodiversity. Known as the Sargasso Sea, the area takes its name from large mats of brown algae—Sargassum natans and Sargassum fluitans—that provide shelter, food, and breeding ground for fish, shrimps, birds, turtles, and crabs.

But while the seaweed is a sanctuary in this place, it has become a scourge in another.

Sargassum wasn’t a regular sight outside its native arena in the Sargasso Sea until 2011. That year, enormous mats of the algae started brewing farther south, in the central Atlantic, eventually washing onto beaches on the eastern and southern coasts of many Caribbean islands.

By 2018, the mats had grown into the largest macroalgae bloom in recorded history, an 8,850 km long mass extending from the central Atlantic and Caribbean Sea to West Africa and the Gulf of Mexico. Chunks of Sargassum, circulated by ocean currents, now regularly wash ashore in the Caribbean, where they rot on the beaches, giving off a strong, sulfurous stench.

Sargassum is a troublesome addition to its new environs. At sea, it blocks algae on coral reefs from absorbing and harvesting sunlight. As the seaweed decays on land, it releases chemicals such as nitrogen and phosphorus that can seep into groundwater and pollute it. Although small amounts of seaweed help stabilize beaches, the large amounts washing ashore in the Caribbean can kill seagrasses, causing beaches to erode faster. It ensnares fish and dolphins and prevents turtles from coming ashore to nest.

Tourism has suffered. Hotels have reported alarming dips in occupancy since the seaweed started washing up. It’s difficult and expensive to remove. Often, workers must collect the seaweed by hand to avoid environmental damage. Mexico has spent $17 million removing the seaweed from its Caribbean-facing beaches since the unwelcome algae arrived there in 2011.

As Sargassum drifts, it’s raising questions of blame and responsibility and prompting some researchers to look for an upside. Seaweed harvesting is a $6 billion industry worldwide. Being able to harvest Sargassumsustainably would allow affected nations to recoup some of the removal costs and damage to tourism.

Mengqiu Wang, an oceanography postdoc at the University of South Florida, has been using data from a NASA satellite to track the bloom. She developed a technique to correct varying background values in the satellite data to achieve a full picture of the outbreak (Remote Sens. Environ. 2016, DOI: 10.1016/j.rse.2016.04.019).

Joseph Montoya holds samples of Sargassum that his crew collected by dipnetting in the North Atlantic.

“I noticed this problem when I tried to map the entire central Atlantic, and I started to see the full picture—the connected gigantic belt across the central Atlantic region,” Wang says. Her strategy measures reflected near-infrared light, which the water absorbs strongly but the seaweed does not, to pinpoint the location and density of floating Sargassum.

In a recent paper, Wang’s team combined satellite data with field samples and nutrient analyses to provide evidence for possible causes of the bloom (Science 2019, DOI: 10.1126/science.aaw7912). Nutrients released by deforestation and increasing fertilizer use are entering the ocean via the Amazon River plume, where the river’s water mixes with the ocean. Meanwhile, upwelling, a natural process wherein nutrient-rich water from deep in the ocean rises to the surface, occurs off the coast of West Africa. The high concentration of nutrients in the ocean is causing the seaweed population to explode.

Joseph Montoya, a biological oceanographer at the Georgia Institute of Technology, collected nutrient data for the Science study. On a cruise out of Barbados in 2018, “we saw tremendous amounts of Sargassum all over the area, including in part of the Amazon plume region, where we had never seen Sargassum before,” he says.

Within the past few years, the amount of the seaweed around Barbados has increased 10-fold, Montoya estimates. “Tourists don’t want to go to beaches that are thigh deep in Sargassum,” he says.

The Sargassum bloom in the Caribbean Sea reaches its height in late summer and declines throughout the fall and winter. Last summer saw the most severe bloom to date; red indicated the most dense areas. 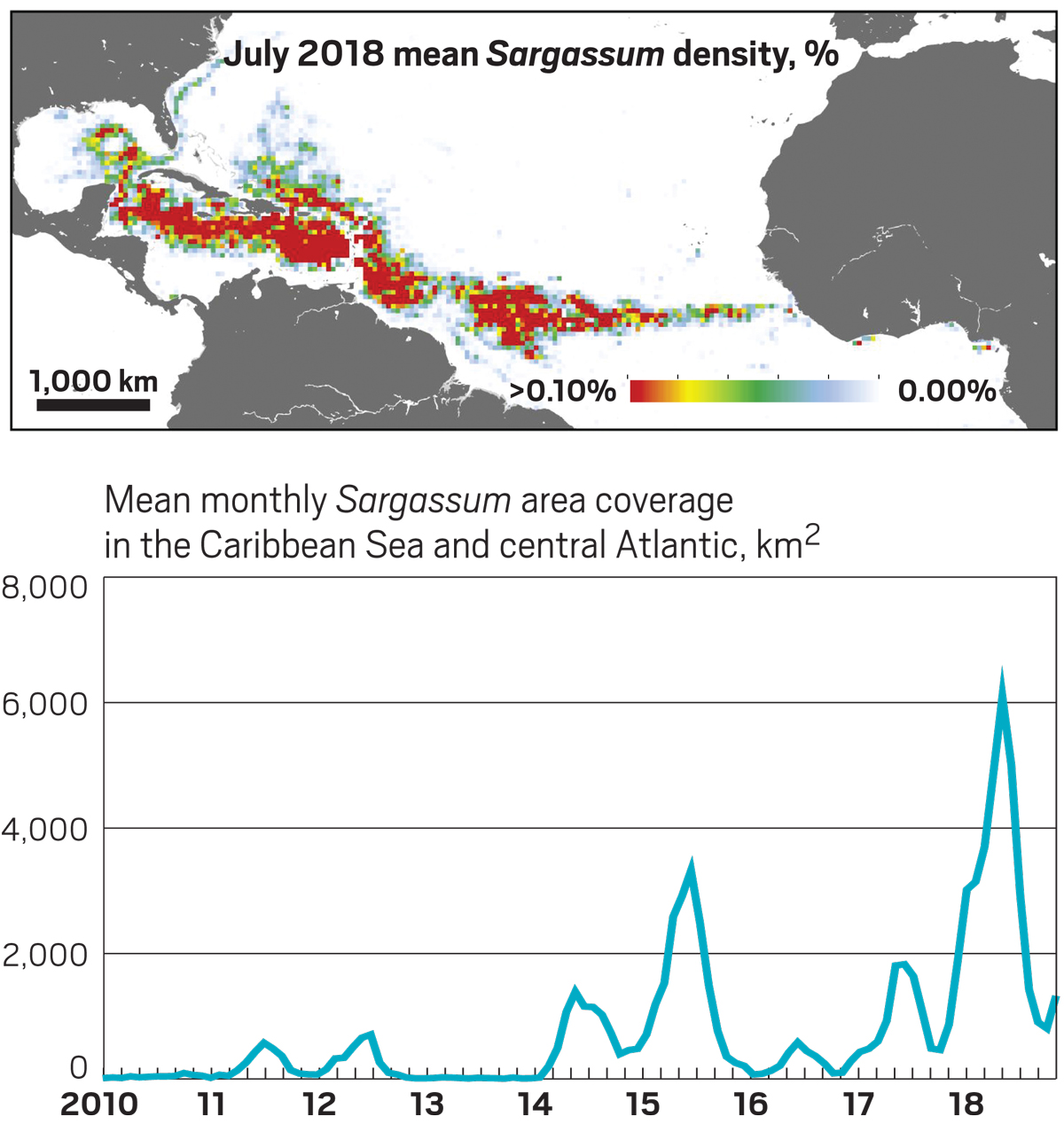 Samples he’s collected had more nitrogen by weight the farther south they were found, a symptom of nitrogen fertilizer enrichment. “There was a clear change in nitrate concentrations in the plume region, with higher nitrate this year than we had seen in 2010, so that does suggest that there’s been some change in the runoff coming out of Brazil,” Montoya says. “It can’t be the whole story, but I think that increased nutrients in the plume are playing a role in sustaining and helping the Sargassum grow.” Upwelling is another source of nutrients for the bloom.

Wang and Montoya’s team did not find a direct link between warming oceans and the seaweed’s rapid growth. The warm water temperatures in the tropical Atlantic region are already ideal for Sargassum. The upwelling they linked with the bloom actually coincided with lower water temperatures. But the researchers would like to continue exploring climate change alongside other potential growth factors, such as deforestation in West Africa, dust from the Sahara, and fertilizer runoff from the Mississippi River plume.

Sargassum growth is most rampant in June and July, after which it starts to decline. This bloom hit its peak in June 2018, and although it was slightly smaller this summer, it remains large. Given the enhanced supply of nutrients, it’s unlikely the bloom will return to pre-2011 levels, Wang says.

Throughout the Caribbean, researchers are trying to find a silver lining to the seaweed inundation. Jayaraj Jayaraman is a biotechnologist and plant microbiologist at the University of the West Indies at St. Augustine in Trinidad and Tobago. The Sargassum “cannot be completely evil,” he says. But for now, no one knows what to do with its great bulk except to cart it off to a landfill.

Because of the Caribbean islands’ shape and location, they act like barriers, catching the Sargassum as it drifts along ocean currents. Jayaraman wants more countries to share in the responsibility of addressing the issue. “If you say, ‘I’ll deal with it only if it comes to me,’ that is absurd because it’s going everywhere,” he says.

Jayaraman is proposing to harvest the Sargassum for study before it reaches the shore, where it rots and becomes hard to clean. His team relies on reports from fishers to know when to expect the Sargassum. “About four times per year, you’ll get a big flow,” he explains. Throughout the rest of the year it arrives in dribs and drabs.

Related: Gulf of Mexico dead zone is largest ever

Jayaraman wants to understand the seaweed’s effect on the local fauna and to develop protocols for recovering chemicals that might be of value. His lab has seen some preliminary success in growing plants fed with compounds extracted from Sargassum. “The response is very distinct, and you can see the effect visually” in how the plants grow, he says.

John Milledge, an algae biotechnology researcher at the University of Greenwich at Medway, is also interested in characterizing the seaweed, which is rich in minerals. Harvesting it is the primary challenge. “Once it’s on the beach, we lose obviously a large amount of moisture as it dries, and we’re losing some mineral content,” he says.

Sargassum accumulates along the coast of Sainte-Anne in Guadeloupe.

Milledge began studying Sargassum from the Caribbean after years of focusing on a different species, Sargassum muticum, that started growing along the coast of England in the 1970s. Milledge’s group recently received a grant from the UK-funded Darwin Initiative to explore sustainable solutions to the Sargassum inundation in Turks and Caicos.

Milledge, whose background is in biofuels, is interested in testing the seaweed’s viability as a feedstock for biogas—the gases, such as methane, that are emitted by microbes as they digest the seaweed. “Although its empirical formula would indicate that it’s got a good biogas potential, it doesn’t in practice produce very much biogas,” he says.

The reason may be that the seaweed contains compounds inhibiting the bacteria trying to digest it. Milledge’s ideal scenario would be to identify those inhibitors, extract them, and then market them for their antibacterial properties. Removing them for sale would be a win-win because it would allow the microbes to chow down on the seaweed and increase biogas yield.

Elsewhere, researchers at the Scientific Research Center of Yucatán led by Raúl Tapia-Tussell are working on a method to pretreat Sargassum with fungus to break it down into smaller molecules and speed up biogas formation (Energies 2018, DOI: 10.3390/en11030494). Tapia-Tussell points out that the digestion process must be carried out as close as possible to where the Sargassum washes ashore because transporting the seaweed will raise the fuel’s cost.

Sargassum might also have applications in agriculture. With some processing, Jayaraman thinks, the seaweed could be a mineral-rich additive for animal feed. But the Sargassum may contain arsenic that it absorbs from the ocean; in that case, researchers would need to find an economical removal method. Milledge’s group is working to characterize the seaweed’s heavy-metal profile. “We have a huge amount of study to do to fully understand the problem,” he says.

Beacon Farms, a facility in the Cayman Islands that offers housing and employment for people in recovery from drug and alcohol use, has also taken an interest. The nonprofit is exploring Sargassum as a compostable soil additive for use in farming.

The Cayman Islands have almost no exports, agricultural or otherwise, points out Granger Haugh, chair of Beacon Farms. “What we want to do is bring new ideas about new crops to the Cayman Islands,” he says.

Beacon Farms is partnering with chemistry professor Antoinette Gayle at the University College of the Cayman Islands to collect data on the usefulness of composted Sargassum in agriculture. Haugh’s team recently began a trial to see whether they could suck up Sargassum with a pump before it reaches the shore. Then they plan to grind and mix it with other components, such as plant matter, in various proportions to determine the best formula. Throughout the process, they’ll test for heavy metals, nutrients, salt content, and more.

Milledge stresses the need to get a full picture of the environmental, social, and economic impacts of any potential use before moving forward. “We’ve got to make sure we don’t cause a long-term problem by spreading things”—like heavy metals—“on the land which will build up over time,” he says.

Finite resources, such as fresh water to wash the collected seaweed, are another important consideration. And effective storage will be crucial. The flow of Sargassum is not continuous, so an industry would need to store it during times of plenty to keep production flowing when the seaweed is scarce.

The seaweed problem has been growing for nearly a decade, and some people in the affected countries feel it’s being overlooked. Jayaraman has been submitting proposals for funding to work on Sargassum for several years without luck. His team is limited in what it can do on its own, and he’s frustrated by what he perceives as a lack of interest.

“Ideas can come from anywhere,” he says. “But what is required is how you support these ideas and make viable solutions, and that has to come from the rest of the world.”

One thought on “Sargassum is strangling tourism in the Caribbean. Can scientists find a use for it?”