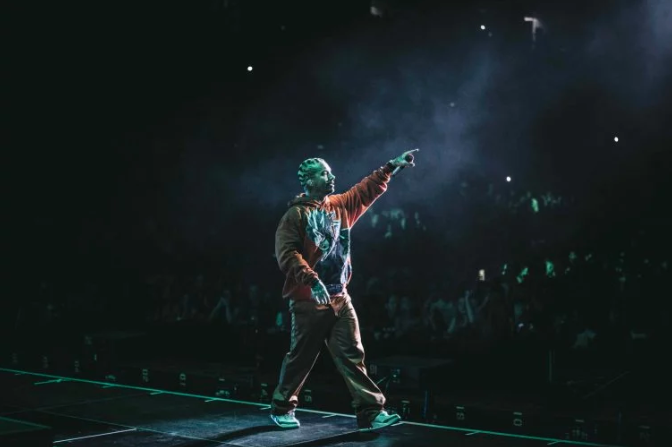 A report by Jhoni Jackson for Remezcla.

Any lingering doubts around Puerto Ricans’ acceptance of Colombian artist J Balvin’s place in reggaeton, a genre originated in large part by artists from the archipelago, and so beloved within and intrinsic to its modern culture, can now officially be put to rest. On Friday, Balvin sold out the opening night of his Arcoiris Tour at El Choli, San Juan’s largest indoor arena. It was a record-breaking event; he’d sold the most tickets at the venue out of any other non-Puerto Rican artist, ever.

We know the world has reggaeton and Latin trap on its radar. Urbano’s doing more than riding a popularity crest, though – it’s on a relentless trajectory toward international acceptance as a mainstream genre. In the past decade, and especially the last few years, however, an influx of outsiders – as in, non-Puerto Ricans, and sometimes even non-Latinxs – have joined the movement. In the process, the genre’s become increasingly akin to pop, albeit with its roots still distinguishable.

There are highly contested grey areas, of course: Do Spanish artists who make Latin music count as Latin artists? Without debating this – that’s a story all its own – we can agree that reggaeton and Latin trap are continually expanding. And the best developments, in terms of preserving those roots, are those whose stylistic innovations are consciously considerate of not obfuscating the genre’s origins.

That Balvin packed out San Juan’s el Choli serves as proof that he’s doing something right. His  show was both far removed – and deeply indebted to – his predecessors.

The crowd was still filling in during an opening set from emerging Puerto Rican R&B artist Lyanno, but even as they wandered about, finding friends, their seats, and getting drinks, they were engaged, roaring as the intro to “Toda,” a 2018 Alex Rose track on which he’s featured alongside Cazzu, Lenny Tavarez, and Rauw Alejandro, rolled in.

Eladio Carrión’s onstage arrival, though, roused the crowd on a higher level: Having enthralled an audience last December at Cardi B’s San Juan concert, a fanbase for Carrión, who has no qualms about sticking with a purist, significantly more sucio style than his pop-forward, chart-topping counterparts, is well-established in Puerto Rico.

A reminder that everyone was really just calentando motores for Balvin, though, came in the curtains that backdropped both openers: You could see hints of the stage display to come in the silhouette of what seemed to be a supersized figurines of Friends with You, the LA collective with whom he’s been collaborating with on promo. 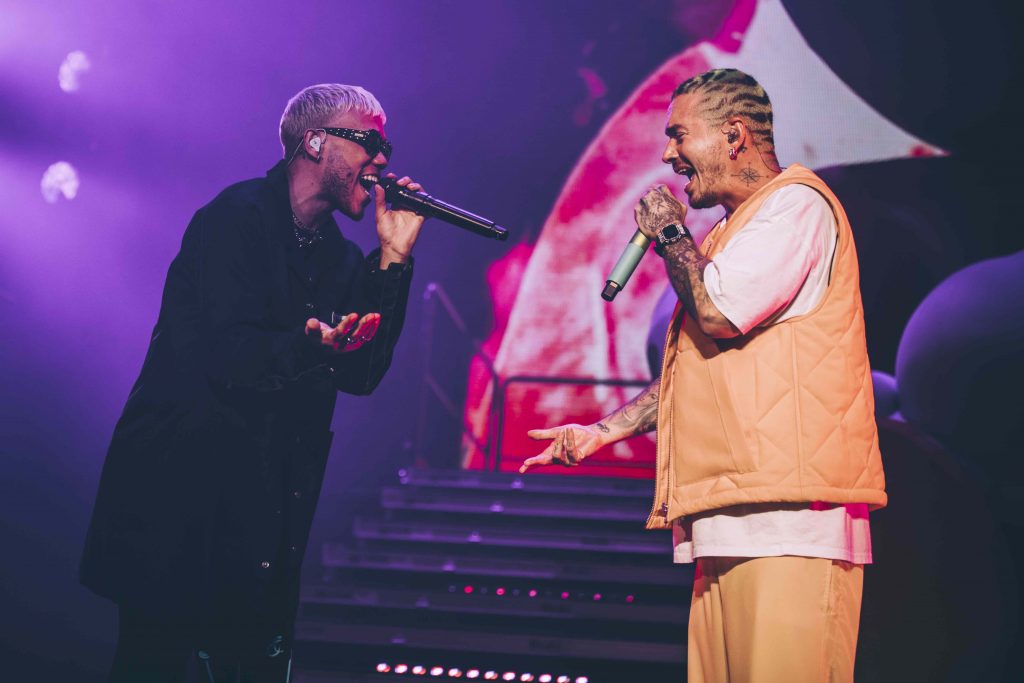 But in the pause between openers and the main event, the crowd was subjected to a cringeworthy, Covergirl-sponsored big screen Kiss Cam – yes, seriously. Some 20 minutes of forced smooching from unsuspecting heterosexual couples later, one might begin to wonder what year it is, and whether or not #MeToo ever happened. Would Bad Bunny have allowed something like this in his show? Probably not. Maybe it seems less than important, but in truth, this kind of spectacle undermines progressive social consciousness; consent is basically erradicated when the spotlight shines on two people who are all of the sudden expected to display intimacy to an audience of thousands.

But Jorge Rivera Nieves, the Puerto Rican Telenoticias reporter who went viral during the #RickyRenuncia protests appeared, much to the crowd’s surprise, and thankfully rinsed the collective vibe of the foul Kiss cam aftertaste. He reminded the crowd of the people-power that fueled the historic #RickyRenuncia protests, in particular July 24, the night of the perreo combativo that culminated in the announcement of the former governor’s resignation.

Repeating his now-famous phrase, he introduced Balvin: “El perreo intenso acaba de comenzar,” he announced, subtly enthused, but mostly retaining the same stoic, professional tone that made the whole thing so hilarious in the first place.

Kicking off with “Reggaeton,” Bavlin, fitted in a neon-orange sweatsuit complementing his neon, black-striped buzzcut, was all smiles in response to the audience’s booming welcome. The oversized silhouette now revealed to be a yellow, bowl-cut donning character with a bunny (or a kitten, or a combination?) resting on its head, with a smiling cloud nestled below, sat atop bleachers from which costumed dancers – yellow creations with heads like a DEVO energy domes – descended in uniform choreo.

Two side-screens featured identical close-ups of Balvin; a boon to those in the back, for sure. Visuals ever-changing, he was encased onscreen by cartoonish elements, like an old-school TV or a cutesy cloud, all in sync with the overall tour aesthetic.

Unexpectedly, though, after “No es Justo” and “Lo Qué Sentimos,” both collabs with Zion & Lennox, the set went dark, save for a grid of blue lights above the main stage.

Balvin emerged, to the freakout of many, on a smaller stage on the opposite end of the coliseum, now donning a camo set and – again – smiling wide as hell. “Bienvenidos al Oasis,” he announced, then rolled right into “Mojaita,” with a skillful, stunning dancer at his side – and, at times, in his lap.

Running through more Oasis songs, It felt like everyone was singing Bad Bunny’s parts with him; songs like “Yo Le Llego” didn’t feel as empty without el Conejo Malo as one might imagine, and “La Canción” felt as much the lloripari bop it was intended to be. And in this more intimate stage setting – the small stage was quickly surrounded by fans on all sides – as he slapped hands with fans within reach, it almost seemed Balvin was happiest when he could connect more closely with the audience.

It’s always interesting to see how artists whose work is heavily tied to collabs will deliver tracks live: As expected, Balvin employed some guests, like Luigi 21 Plus for “Siempre Papi, Nunca Inpapi” and Jowell & Randy for “Bonita” (The latter got their own time performing – and promoting their own upcoming San Juan show – while Balvin rooted them on while sidled up to his DJ).

Some of the collaborators who couldn’t be there physically, though, were still represented – as cabezudos. Both Bad Bunny and Cardi B got the big-head treatment for “I Like It” which also included a salsa montage for its finale. Rosalía, however, appeared via screen only, for “Con Altura” earlier in the set.

During “Mi Gente,” things got wild: A barrage of kooky characters flooded the screen as well as the stage, the song’s tempo was gradually upped to a trippy-fast speed, the lighting flashier and more raucous. Plenty of smoke and pyrotecnics later, another “freeze” silenced the music; when the crowd’s cheers tampered down, Balvin, red-faced and riding high, requested the house lights go up as he directed the crowd in following his onstage movements: up, down, to the left, to the right, et cetera.

Encoring with Jhay Cortez on “No Me Conoce,” the smoke began to dissipate. But before the end-of-show alarms blared, a burst of confetti made the whole scene glitter. He gave thanks to Puerto Rico – again.