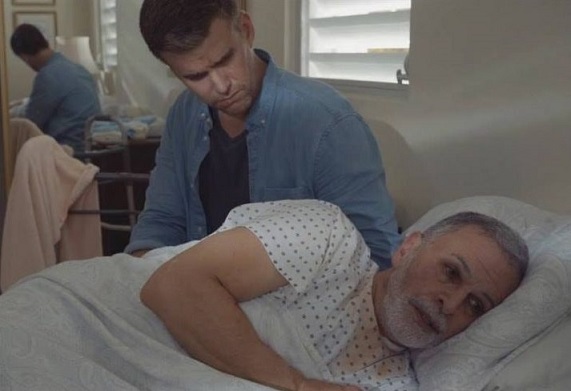 In his film review—“‘Seneca’ Is about a Puerto Rican Actor Who’s Frustrated with His Career & State of His Country”—Manuel Betancourt (Remezcla) writes about Seneca, a film co-written, produced, and directed by AMDA Acting faculty member Jason Chaet with his producing and writing partner, Armando Riesco (who also stars in the film). The film premiered on August 16, 2019, at HBO’s New York Latino Film Festival. Here are Betancourt’s observations:

In Jason Chaet’s Seneca, a man and his homeland are in crisis. Co-writer Armando Riesco plays David Seneca, a Puerto Rican actor who left the island in pursuit of his dream career. After years of toiling around in New York City, he’s stuck doing voice-over gigs, constantly baffling people when mistaken for someone with German ancestry, and caring for his precocious young daughter while his marriage slowly falls apart. Oh, and on top of that, he can’t detach himself from his phone on which he obsessively watches Hurricane Maria coverage and feels paralyzed because of it. Riesco and Chaet’s portrayal of the mellow bilingual character attempts to show how the island and the working actor alike suffer from misconceptions, indifference and outright bigotry in ways that ripple out and hurt.

Set mostly in New York City, Seneca doubles as an actor’s insider guide to the Big Apple: its first shot shows us Lincoln Center, with a wary David looking on and musing on the stages he should be playing given how much promise and talent he was told he had in his youth. Now, graying and settled in a gorgeous apartment bankrolled by his working wife, the frustrated actor finds himself at a loss of where it all went wrong. The film’s meandering plot will slowly see him unravel, the more and more he cannot seem to let go of the trauma of what’s going on in Puerto Rico. Even as other characters tackle it head on (a neighbor later tells him she just got back from the island), David’s reticence to see whether his family house is still standing or whether his mentor’s cancer battle is still going, paralyze him and force him to see why he feels so untethered from his life.

Perhaps given how closely the script mirrors his own experience, the moments in Seneca that most resonate are the ones where we see David’s actorly frustrations. On the one hand, his unaccented English and his pale-looking features means he’s constantly passing in the eyes of casting agents; his young protégé Pedro, played by Moisés Acevedo, even admits that he kept looking for a darker guy the first time he was told to go see David on stage. On the other, he’s not going up for the parts that now Pedro, who looks like he could sub for any of the guys in Hamilton, is nabbing since everyone wants to capitalize on such a seemingly seismic shift in the culture. Stuck between great promise and a lack of industry support, David finds himself getting notes like “Not too Sabado Gigante” when he does Spanish-language voice-over work and is even encouraged to create a racist caricature of a Mexican gangster for a motion-capture video game performance. Much like Nobody’s Watching, Seneca shines a light on the kind of insidious racism that Latino actors go through when trying to break through.

But all those beats get lost amid a screenplay that is much too interested in making David’s midlife crisis stand in for too many things. His vexed relationship with Puerto Rico and with a former teacher who was always encouraging (played by the stellar Tony Plana) obliquely frames the piece, with a flashback of a conversation the two have punctuating David’s current problems, but their final if powerful scene together, almost feels like it belongs in a different movie. Similarly, David’s brief stint as a viral sensation when he punches a white guy who spews racist remarks about how David’s daughter should speak English in public, is so needlessly blunt that it pushes back against the more nuanced discussions the film raises elsewhere, even as it’s the narrative engine of much of what follows. Add in an adorable and mature daughter, an understanding if frustrated wife, an on-the-rise and protective protégé — not to mention racist video game directors, dutiful diction lesson students and flirty neighbors — Seneca’s ensemble starts to feel overcrowded. By the time Chaet introduces a teenager’s “kitty cat city” version of New York (a cardboard replica of the metropolis a neighbor is building, courtesy of yet another precocious young character), the image is so cloying and its message so diffused that it’s hard to begin reconciling these disparate strands into one cohesive whole. As much as David’s world necessarily feels like it’s pulling him in different directions, one wishes Seneca, which has its heart in the right place, had a clearer destination in mind.

[Many thanks to Peter Jordens for providing these links.]