An obituary by Richard Sandomir for The New York Times.

Paule Marshall, an influential writer whose novels and short stories about ethnic identity, race and colonialism reflected her upbringing in Brooklyn as a daughter of poor immigrants from Barbados, died on Monday in Richmond, Va. She was 90.

Through five novels and several collections of short stories and novellas, Ms. Marshall (whose first name is pronounced “Paul”) created strong female characters, evoked the linguistic rhythms of Barbadian speech, and forged an early link between the African-American and Caribbean literary canons.

Evelyn Hawthorne, an English professor at Howard University, described Ms. Marshall in the journal The Black Scholar in 2000 as “the critical bridge” between earlier black female writers like Zora Neale Hurston and Gwendolyn Brooks and the next wave of African-American and Caribbean writers like Toni Morrison (who died this month), Maya Angelou and Jamaica Kincaid.

“Brown Girl, Brownstones” is set in Brooklyn, where a girl named Selina grows amid conflicts between her Barbadian parents — a serious mother who wants to save to buy the brownstone they rent and an impulsive father who wants to return to his homeland.

Writing in “The Norton Anthology of African American Literature” (2014), Cheryl Wall, an English professor at Rutgers University, said “Black Girl” was “the novel that most black feminist critics consider to be the beginning of contemporary African-American women’s writings.”

The novel jump-started a career that toggled for decades between writing and teaching at universities.

In 1959, Langston Hughes appeared, unannounced, at a party for Ms. Marshall’s book in a Harlem storefront, a characteristic act in support of a young black writer.

“There he stood, the poet who had long been a literary icon, come to celebrate with me,” Ms. Marshall wrote in her memoir, “Triangular Road” (2009), adding that he was there “to beam at me like a paterfamilias whose offspring had done him proud.”

In 1961, she earned a Guggenheim Fellowship and published “Soul Clap Hands and Sing,” four long stories set in Brooklyn, Brazil, Barbados and British Guiana, all of which featured aging men.

Her relationship with Hughes expanded. In 1965, she joined him and another black writer, Bill Kelley, on a State Department tour of Europe, and he continued to mentor her through postcards and late-night phone calls.

The prolific Hughes once implored her to write more quickly.

“‘Paul-e,’” he said in one conversation, pronouncing the silent ‘e,’ she wrote in her memoir. “‘Do you realize that I have a book out for every year that you’ve been alive?’ (I was in my mid-30s at the time.) ‘You better get busy.’ ”

Valenza Pauline Burke was born on April 9, 1929, in Brooklyn. Her parents were immigrants from Barbados: Samuel Burke was a factory worker and salesman;, Adriana (Clement) Burke was a housekeeper. When Pauline, as she was then known, was 9, her father left the family to join Father Jealous Divine’s cultlike religious movement in Harlem.

Pauline found influences all around her. The first ones were her mother and her Barbadian friends at the kitchen table of her home in the Stuyvesant Heights neighborhood of Brooklyn. They were poets whose exuberant, artful, freewheeling use of language — “In this man world you got to take yuh mouth and make a gun!” — helped them “overcome the humiliations of the work day,” she wrote in The New York Times in 1983.

At a local library, she found sustenance in writers as diverse as Jane Austen, Zane Grey and William Makepeace Thackeray. She also discovered the black poet Paul Laurence Dunbar. The opening lines of his “Little Brown Baby” (“Little brown baby wif spa’klin’ eyes/Come to yo’ pappy an’ set on his knee”) moved her, she later said, because her father had already left.

And Dunbar’s “A Negro Love Song” (“Seen my lady home las’ night/Jump back, honey, jump back”) “roused in me all kinds of delicious feelings and hopes,” she told The Times. 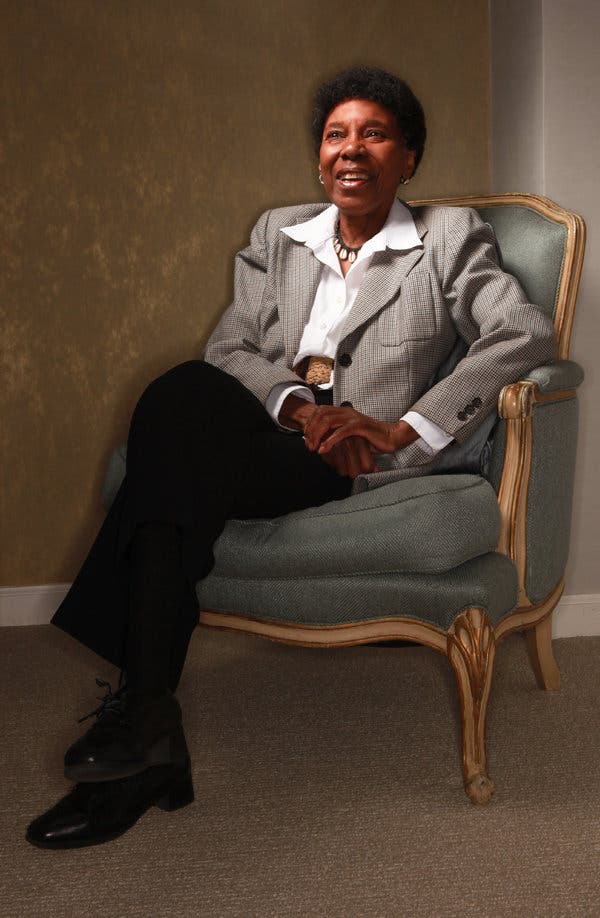 Seeking a stable life for Pauline, her mother suggested that she get a secretarial job at the phone company, which had only started to hire black people. She chose to go to college instead, studying European literature at Hunter College. After a year, she contracted tuberculosis. When she recovered, she transferred to Brooklyn College, graduating in 1952.

She changed her name to Paule when she applied for jobs in journalism, believing that the explicitly female Pauline would hurt her prospects. She was hired at Our World, a black picture magazine, and wrote articles from Brazil and Barbados.

In her review in The Times of “Praisesong,” the story of an older black woman on a journey to a Caribbean island, the novelist Anne Tyler called it a “convincing and eerily dreamlike” book that “rings with the same music and some of the same lilting Barbadian speech” of “Brown Girl.”

When “Brown Girl” was reissued in 1983, Darryl Pinckney noted in The New York Review of Books: “Paule Marshall does not let the black women in her fiction lose. While they lose friends, lovers, husbands, homes or jobs, they always find themselves.”

Ms. Marshall also taught at colleges and universities over the years, including Yale, Columbia, Virginia Commonwealth University and New York University. She retired from teaching in 2009, the year her memoir, which she adapted from of a series of lectures, was published.

In addition to her son, she is survived by two grandchildren and a stepdaughter, Rosemond Menard Webb. Her marriages to Kenneth Marshall and Nourry Menard ended in divorce.

Ms. Marshall defined herself as a “tripartite” person, equally connected to Brooklyn, Barbados and Africa. During one visit to Barbados, a former slave colony, she watched the Atlantic’s grayish-green waves smack into the beach with “a cry each time that might have been taken from the Book of Lamentations,” she wrote in her memoir.

She was struck with that agonizing sound.

To her, it was as if the vast ocean where so many enslaved Africans had crossed into slavery in the New World “was permanently sitting shiva,” the Jewish ritual of mourning the dead.