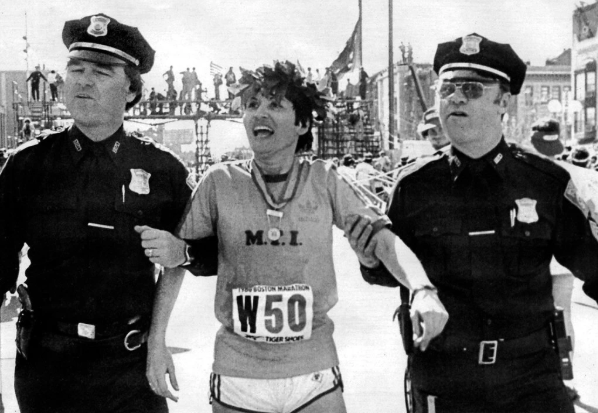 An obituary by Richard Sandomir for The New York Times.

Rosie Ruiz, whose name become synonymous with cheating when Boston Marathon officials vacated her victory in the 1980 race after determining that she had sneaked into it about a mile from the finish line, died last month in Lake Worth, Fla. She was 66.

Her death, on July 8, was not reported widely until a writer for the website LetsRun saw a posting on the site’s message board linking to a funeral home obituary under Ruiz’s name through marriage, Rosie M. Vivas. Cancer was given as the cause of death.

Ruiz was working as a secretary at a commodities trading firm in Manhattan when she stunned the running world by being the first woman to cross the finish line in Boston in 2 hours, 31 minutes and 56 seconds. It would have been the third-fastest time ever recorded by a woman in a marathon.

But suspicions about her victory arose immediately. Spotters had not seen her at checkpoints along the 26-mile course, and after the race she told a television interviewer that she had run only one other marathon, the 1979 New York City Marathon, and that she had finished that race in 2:56:33.

“So you improved from 2 hours and 56 minutes to 2 hours and 31 minutes?” the interviewer, Kathrine Switzer, a TV commentator who had gained fame as the first woman ever to run in the Boston Marathon, asked incredulously.

“I trained myself,” Ruiz replied, without explaining further.

She then appeared not to understand Switzer’s questions about interval training — workouts designed to improve a runner’s speed.

“Rosie Ruiz, the mystery woman winner — we missed her at all our checkpoints,” Switzer said as Ruiz stood by, a laurel wreath on her head.

Ruiz’s claim about the New York race quickly unraveled. Susan Morrow, a freelance photographer, came forward to tell The New York Times that she had been on the subway with Ruiz during the marathon and that Ruiz had told her that she had dropped out at the 10-mile mark with an injured ankle.

After leaving the subway, Ms. Morrow said, they walked to the finish line and watched Grete Waitz win the women’s race.

New York City Marathon officials invalidated Ruiz’s time after reviewing videotape showing that Ruiz had not crossed the finish line in the time she had mistakenly been assigned by a volunteer, who thought Ruiz was an injured runner.

Days later, Ruiz’s victory in Boston was also nullified. Race organizers there based their decision on about 10,000 photographs taken along the last mile of the race as well as on information supplied by the news media and observers along the route. In addition, at least one witness recalled seeing Ruiz enter the course at Kenmore Square, about a mile from the finish line.

The evidence proved that the Canadian runner Jacqueline Gareauhad won the race.

“I can truthfully and honestly say without hesitation that today has been the second saddest day of my life,” Ruiz was quoted as saying by The Associated Press after her disqualification, “only to be surpassed by the day I had to leave my father in my native country 18 years ago.”

She attended Wayne State College in Nebraska for three years before moving to Manhattan without having graduated.

She soon faced legal problems. She was charged in 1982 with grand larceny and forgery, accused of stealing cash and checks from the real estate firm where she had been a bookkeeper. She was sentenced to a week in jail and five years’ probation. In 1983, having moved back to Florida, she was arrested on charges of attempting to sell cocaine to undercover agents at a hotel in Miami and spent three weeks in jail.

Survivors include her domestic partner, Margarita Alvarez; three sons, Francisco, Reynoldo and Gilberto; and her brother, Robert Ruiz. Her marriage to Aicardo Vivas ended in divorce.

In the 39 years since the Boston Marathon, Ruiz kept her medal — a new one was made for Gareau — maintaining that she had completed and won the race, fair and square. But in 1996, Steve Marek, a defender of Ruiz’s who led a running club in Westchester, said that several months after the marathon she admitted to him that she had cheated.

“She jumped out of the crowd, not knowing that the first woman hadn’t gone by yet,” Mr. Marek told The Boston Globe. “Believe me, she was as shocked as anyone when she came in first.”