Part 2 of Jamaica Global Online’s interview with Orlando Patterson. See the link to Part One below.

At the tender age of 23 when Orlando Patterson published his first novel The Children of Sisyphus to much literary acclaim, he had dreams of becoming the great Jamaican and Caribbean novelist of his generation. He was well on his way to completing his second novel, An Absence of Ruins (1967), but was rudely awakened by the realities of a writing life. As Patterson tells the story, he was invited to tea by none other than George Lamming (In the Castle of My Skin; The Lonely Londoners ), then the toast of literary London, but was shocked to discover that Lamming , for all his fame, lived in a one-room bedsitter in a remote part of North London. On the train journey back to Central London, Patterson asked himself over and over again “is that to be my future?”

Already on the faculty of the prestigious London School of Economics (LSE) from which he had earned his PhD and with a publishing contract under his belt to publish his thesis –The Sociology of Slavery (1967) –itself destined to become a classic, Patterson made a conscious decision to devote his future career to his scholarship. That decision was born out of a deep sense of obligation towards his mother “Miss Mina” Almina Patterson to whom Patterson attributes 80% of his success. It was she who insisted that he had to go to Kingston College (KC) rather than Clarendon College near the town of May Pen where he grew up. Landing a ‘good job’ as a schoolteacher or a civil servant after High school was not good enough for Miss Minna’s one son; he had to go all the way to the University of the West Indies, and beyond if she had her way. Patterson began repaying her faith even as a student, sending her one third of his scholarship money and performing brilliantly as an undergraduate at UWI and using the full advance he received on the Sisyphus publishing contract to pay down on a house for her in Kingston.  Charles Patterson, Orlando’s father who was estranged from his mother during periods of his growing up years is something of a shadowy figure as he speaks to Jamaica Global Online about those early years. He does recall with wry amusement though that father Charles who was a police detective had a rare talent amongst his colleagues, the ability to record in shorthand, which landed him the unenviable assignment of ‘shadowing’ and reporting Marcus Garvey as he delivered speeches around Kingston!

Patterson – once described by the British Telegraph newspaper as the ‘Caribbean Zola’ for his talent in both fiction and sociology – has never really abandoned his desire to be a fiction writer. However, he soon realized that sociology and fiction were in many ways antithetical to each other. How so? He explains that both disciplines draw on the same material but interpret it differently. The approach in fiction writing is to begin from the particular and to the extent that a writer is successful, the universal emerges. The sociologist thinks in generalizing terms from the beginning so for him the two were in tension for a long time – long enough though for Patterson to produce what has been up to now his third and last novel Die the Long Day (1972).  That tension was resolved perhaps fortuitously by his moving from Jamaica to the USA, where he has since become a fixture in the US academy and an acknowledged public intellectual in the USA.

THE CONCEPT OF SOCIAL DEATH AND ITS PERSISTENT RELEVANCE 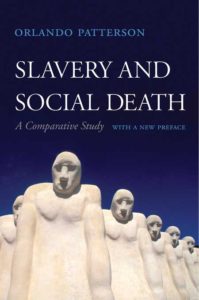 The finality of that transition to full focus on his scholarship was heralded by the publication in 1982 of his landmark study Slavery and Social Deathwhose impact reverberates with even greater intensity today over three and a half decades later in the context of current developments. At the core of Patterson’s concept of social death as it applies to chattel slavery, is that unlike other forms of oppression, the enslaved had no recognized legal existence in the society. This was used as justification to deny them fundamental human rights and by extension to declare that they did not belong. The denial of the right of natality, the so-called birtherism challenge directed first at Barak Obama and now Kamala Harris in its modern manifestation, has even been used to describe the condition of undocumented immigrants in the USA today – and even those who were  born and have lived their entire lives in America.

Patterson believes that the concept of social death is too extreme to characterize the condition of present day blacks in America, thus distancing himself from those who describe themselves as ‘Afro pessimists’. For him the more lasting legacy of slavery and its successor ‘Jim Crow’ policy was not just the mass genocide of black people but the attempt to wipe out their culture. Even more egregious is right wing America’s use of their culture in a reactionary way to explain why black people are poor and continue to lag behind white America by all indices. By blaming the victim and insisting that they should pull themselves up, right wing America seeks to absolve itself from hundreds of years of slavery and Jim Crowism and a structure that is designed to keep blacks poor. Patterson argues that you cannot separate culture from structure; that the condition of blacks in America today is the direct consequence of oppression and that the state has a responsibility to provide help.

Does this mean Patterson supports the call for Reparations? There is no question that the colonialists have deep responsibilities but how do you compensate? Describing himself as a Progressive Social Democrat, Patterson sees affirmative action as a form of reparation and argues that the failure to compensate blacks in America explains the difference in net worth between blacks and whites; why so many blacks live in ghettos; attend poorly resourced schools and are locked out of the networks that create upward mobility and wealth.

THE WINDRUSH SCANDAL AND BRITISH RACISM

Patterson detects similar elements of racism in the Windrush Scandal that rocked Britain in 2018. Describing Teresa May as ‘that horrible woman’ and a descendant of Enoch Powell, he suggests that not recognizing Windrush people as ‘belonging’ was tantamount to a form of social death. By making life so difficult that persons want to leave the country is a way of saying “you have no fundamental rights, get out!” Even ‘monkey calls’ to black football players like Raheem Sterling is white Britain’s way of saying ‘you don’t belong.’

In comparing the status of blacks in Britain and America Patterson identifies two major differences.  He notes that the rate of intermarriage in Britain is far higher than in America, resulting in a substantial portion of 3rd generation people in Britain being mixed. A preponderance of black women marrying white men has created a much higher level of acculturation than in America where the tendency is for middle class black men to marry white women. The other major difference is the ghettoization of black people in America. In Britain, black ghettos were never allowed to develop thus avoiding many of the problems in education common in America where according to Patterson schools are as segregated today as they were in 1970.

He blames much of the failure to undo ghettos on black leaders who are more intent on keeping blacks politically captive, and on weak thinking which allows racial pride to get in the way. He also attributes the persistence of the black ghettos on a re-assertion of ethnic identity among blacks where assimilation becomes a bad word. Patterson insists however that it is possible to maintain ethnic identity while being involved in mainstream American culture and speaks out against the current backlash where any notion that black America should engage with the dominant culture is frowned upon.

That’s the Jamaican way of saying the loss of the 2016 Presidential election leaving the way open for the era of Trumpism was largely due to poor strategies on Hilary Clinton’s part. Her wholesale embrace of globalization led her to neglect the negative aspects of a phenomenon which, contrary to the false neo-liberal rhetoric that said everybody would benefit from globalization, disproportionately affected working class people who lost jobs and resulted in massive inequality. To compound matters, she neglected that bulwark of Democratic support – the union-based blue-collar workers of the Midwest in Wisconsin, Michigan and Pennsylvania, all states that previously voted for Obama. And worst of all she failed to bring out the black voters, a mere 80,000 of whom would have made a difference.

Trump by contrast homed in on the populist argument that he would bring back the jobs to America and promoted the cultural/racial argument that the country was being taken over by immigrants. In the process, Trump has  emboldened racist white Americans to crawl out of the woodwork in a reaction against Obama and he now all but ‘owns’ the Republican Party guaranteeing not only his return as the Republican candidate but also the election in the primaries of  ONLY those candidates who support him. Patterson predicts that Trump WILL lose in 2020 but to ensure that happens the Democrats will have to bring back all those who voted for Obama and focus on winning the firewall states of Ohio, Pennsylvania, Wisconsin, Michigan and Florida.

BACK TO THE FUTURE

Patterson plans to come back to Jamaica (in his writings) which he says is the source of it all. That is already in train as later this year, his first non-fiction work on Jamaica since The Sociology of Slavery in the form of  The Confounding Island  will be released. There are still a few academic projects which he has his sights set on completing and after that who knows? As he said in Part one of this interview, it all depends on whether the creative muse is still alive.

Read Part One Here – ONE ON ONE WITH A JAMAICAN ‘BIG THINKER’: Orlando Patterson talks to Jamaica Global Online about this confounding island