An obituary by Alexandria Symonds for The New York Times.

Martin Sostre was jailed twice on drug charges and spent nearly 20 years in prison, much of it in solitary confinement. In that time, he transformed himself from “a street dude, a hustler,” as he described himself, to a pioneering fighter for prisoners’ rights.

“For the first time, I had a chance to think, and began reading everything I could — history, philosophy, and law,” he once said, as quoted in a 2017 NPR report that detailed his life.

He taught himself the law, organized inmates and challenged harsh prison conditions, filing lawsuits from behind bars in the 1960s and ’70s — a decade before the prisoners’ rights movement began growing — that led to legal decisions ensuring greater protection for inmates.

He successfully sued for the right to practice Islam while incarcerated, which his jailers had denied him and other prisoners. And he protested some standard prison practices as dehumanizing, including censorship of inmates’ incoming mail, rectal examinations and the use of solitary confinement as punishment.

By the 1970s, Sostre’s activism while incarcerated on a drug-sale charge, which he maintained was a police setup, would make him an international symbol. He garnered the support of Jean-Paul Sartre, prominent civil-rights advocates and Andrei Sakharov, the Soviet physicist and Nobel Peace Prize winner.

“He was raising issues of solitary confinement as cruel and unusual punishment long before anyone was even granting that prisoners have a constitutional right to anything,” Garrett Felber, a historian at the University of Mississippi who is editing a collection of Sostre’s writing, said in a telephone interview.

Martin Ramirez Sostre was born in Harlem on March 20, 1923, to Crescencia and Saturnino Sostre. His mother was a seamstress and hatmaker, his father a merchant marine. During the Great Depression he was forced to drop out of school to help his family. He was drafted into the Army in 1942 but was dishonorably discharged in 1946 after being involved, by his account, in a fight between rival companies.

Returning to Harlem with no job skills, he turned to the streets. His first arrest was in 1952 for possession of heroin. He then fled to California but was captured and ultimately sentenced to 12 years in prison that October. After a short stint at Sing Sing, he was transferred to the Attica Correctional Facility and later to Clinton State Prison. There he began transforming his life.

Sostre took up yoga for its mental and physical discipline and became involved in the Nation of Islam after borrowing a copy of the Quran from a fellow inmate. He wanted others to join him in an Islamic study group, but corrections officials accused him of trying to recruit for “an anti-white movement” and dismissed his motives as not religiously sincere. He was placed in solitary confinement.

He taught himself constitutional law with books from the prison library, and he and several other inmates sued the warden at Clinton, J.E. LaVallee, for the right to practice their religion. The suit was successful: Sostre and the others were allowed to buy the Quran and hold Nation of Islam meetings. Their case preceded the landmark Cooper v. Pate Supreme Court decision, which also revolved around the right of an inmate to access Black Muslim publications and which established that people retain constitutional rights even in jail and that they are entitled to address their grievances in court.

Sostre was released in October 1964 after 12 years in prison, four of them in solitary. He broke with the Nation of Islam that year, moved to Buffalo and took a job with Bethlehem Steel. The regular paycheck enabled him to save enough money to open the Afro-Asian Book Shop in the Cold Springs neighborhood. He stocked it with Communist, anarchist and black nationalist texts.

Once Sostre added jazz records to the mix, the bookstore became a popular hangout for the city’s young leftist population — both nascent black radicals and curious white college students.

Jerry Ross, a white student who drifted in from what was then the State University of New York at Buffalo, was impressed to see Mao Zedong’s “Little Red Book,” anti-Vietnam War texts and materials on black history — “books,” he said, “you could not get in the university bookstore.”

Sostre, he said, was a willing mentor to anyone with sympathetic politics. “He treated me like he was colorblind,” Ross said. “He just completely accepted radical students into his fold.”

But the bookstore wouldn’t last. As in dozens of cities across America, racial tensions in Buffalo boiled over during the “long, hot summer” of 1967. By the end of June, many young black residents of Cold Springs, fed up with what they saw as structural inequality, police brutality and a lack of economic opportunity, took to looting and rioting.

Businesses had all but shut down, but the Afro-Asian Book Shop remained open, popular with the young and an object of scrutiny for the police. In “Frame Up!,” Sostre described feeling targeted after receiving frequent visits from the police and F.B.I. agents.

In the rioting a neighboring tavern caught fire, and water from firefighters’ hoses “wiped out” most of Sostre’s book inventory, Ross said.

Then the police accused Sostre of making Molotov cocktails in the store’s basement. He was arrested on charges of inciting to riot, arson and possession and sale of narcotics.

The trial that followed in 1968 focused on a supposed drug deal. The state’s main witness was Arto Williams, who was awaiting his own trial on a theft charge. He testified that he had bought $15 worth of heroin from Sostre at the bookstore, but Sostre insisted that he had been set up by the police.

It took just a few hours for the all-white jury to convict him of selling heroin, and the judge, Frederick Marshall, sentenced him to up to 41 years in prison.

At the Green Haven Correctional Facility in Dutchess County, Sostre was once again put in solitary confinement — and once again he stood up for his rights. He refused to cut his beard and would not submit to rectal examinations, resulting in more time in solitary. He was also punished when he tried to mail a document to his lawyer.

“He described his protest against rectal examinations as fighting to keep the last vestige of his humanity,” Felber, the historian, said in an email.

In 1969, Sostre sued Gov. Nelson A. Rockefeller; Paul D. McGinniss, the state corrections commissioner; and several prison officials for $1.2 million, saying that his time in solitary had violated his constitutional rights. 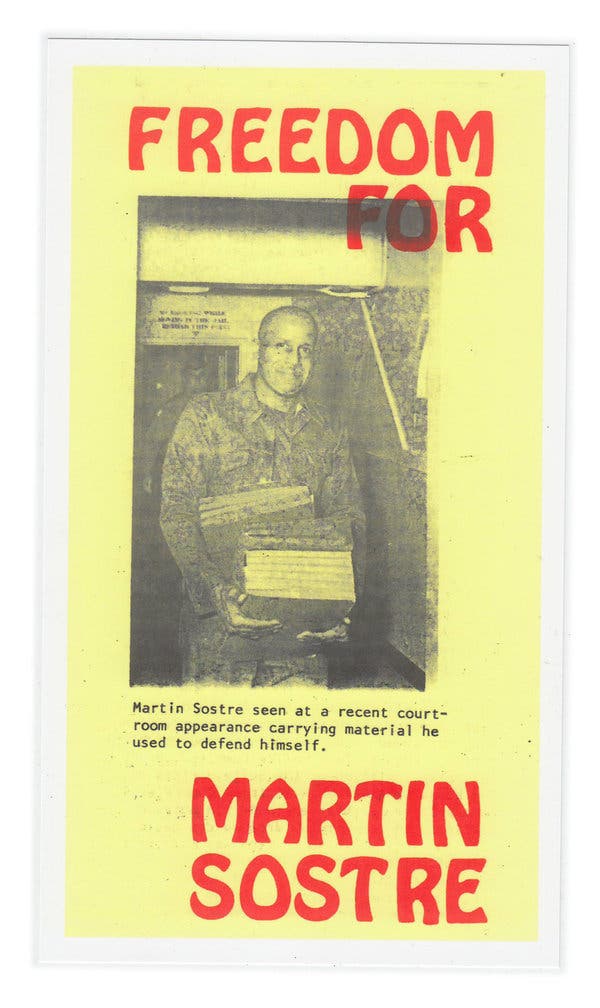 Later that year, Judge Constance Baker Motley of United States District Court (the first African-American woman appointed to the federal bench) ordered his immediate release from solitary confinement and awarded him $13,020 the following year — $35 for each of the 372 days he spent isolated.

Throughout, Sostre maintained his innocence on the original charges. And in 1973, Arto Williams recanted his testimony, saying he had lied so that he could have his own theft charge dropped.

Sostre became something of a cause célèbre, drawing the attention and support of left-leaning figures like Jean-Paul Sartre, Noam Chomsky and former Attorney General Ramsey Clark. Amnesty International called Sostre “the victim of an international miscarriage of justice.”

The New York Times wrote that “because of his imprisonment and subsequent activities, prisons in America and particularly in New York can never again be quite the dark pits of repression and despair they once were.”

Sostre became an aide to Assemblywoman Marie M. Runyon, a Democrat. He married Lizabeth Roberts and had two sons, Mark and Vinny. He also continued his activism, focusing on tenants’ rights. But he always felt like a marked man, Vinny Sostre said in a telephone interview.

“We thought the place was tapped here for a long period of time,” he said of his childhood home. “I remember our whole family tearing apart things, looking for wires.”

In 1984, Sostre was managing an apartment building when he got into an altercation with a tenant he was trying to evict. Sostre shot him and then fled New York.

He returned two years later and was arrested after he was spotted in the library of New York Law School in Manhattan. He was acquitted in 1987 after arguing that he had acted in self-defense.

By the time Sostre died, on Aug. 12, 2015, at 92, he had largely been keeping to himself. His family, following his wishes, did not announce his death publicly.

Vinny said his father would have wanted “to be remembered the same way he lived, which is to inspire people to fight against injustice.”