A report by Damien Flanagan for The Mainichi.

In the second James Bond novel, “Live and Let Die”(1954), Ian Fleming sends Bond to New York where he settles down in his hotel room and does something quite unusual: he reads a book.

007 generally likes to read Raymond Chandler-style thrillers, but on this occasion he reads something specifically recommended by his boss in London, “M.” The book is called “The Traveller’s Tree” by Patrick Leigh Fermor.

Fleming indeed took the extraordinary step in “Live and Let Die” of quoting a full five pages of Fermor’s description of Voodoo. Armed with this esoteric knowledge, 007 is able to face Harlem’s “Mr. Big” and his manipulation of his Voodoo mystique.

The story of how all this ends up in a Bond novel is an extraordinary one and begins on the other side of the Atlantic, on the Greek island of Crete during World War II when Patrick (“Paddy”) Fermor was part of a Special Operations unit that carried out the daring kidnap of the German commanding general on the island. 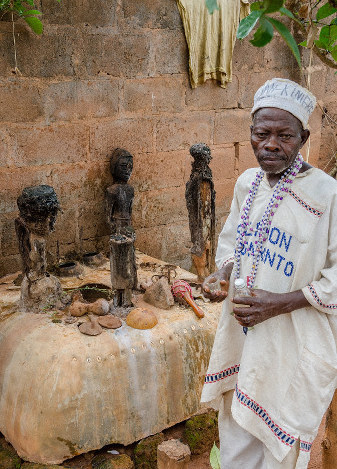 One of Fermor’s team was a Greek man who after the war was commissioned to produce a book of photos of the Caribbean, and Fermor was asked to go with him and write the text. While he was there, amongst many other diverse observations, he witnessed Voodoo rituals on Haiti. He would also twice stay at Ian Fleming’s winter retreat of Goldeneye on Jamaica.

James Bond was not the only person in mid 1950s New York taking a strong interest in Voodoo rituals. Arriving in 1957 from the other side of the world came Yukio Mishima, hoping to stage an off-Broadway production of his “Modern Noh Plays.” Holed up like James Bond in a New York hotel room, he would later run out of money and grow ever more frustrated with production delays.

Leaving the producers to nut out the details of the Noh Plays production (sadly never realized), Mishima headed off on a tour of the Caribbean. A highlight of the trip was going in search of Voodoo in Haiti. Three weeks after Mishima left Haiti, the infamous dictator Papa Doc Duvalier came to power.

I am not usually that interested in the tropes of Noh, but I have in my head a Noh play set in modern Haiti in which a traveller encounters the ghost of Mishima in Part 1 and introduces in Part 2 the legacy of Duvalier in a curious fusion of Noh and Voodoo stylization. That’s a play I would go and see.