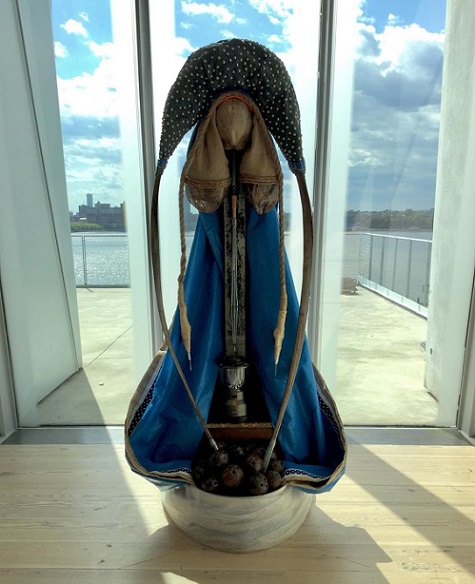 [Many thanks to Carlos Rivera-Santana for bringing this item to our attention.] The full title of this BELatina review is “At New York’s Whitney Museum Biennial, Puerto Rican Artist Daniel Lind-Ramos Stands Out as a Best of Show.” The review stresses that Lind-Ramos, from Loíza, Puerto Rico, “is one of the standouts of the exhibition.”

New York City’s Whitney Museum of American Art opened up its 2019 biennial this week, showcasing works of art that channel the spirit of today’s America. The curatorial team selected work from 75 artists in what has been described as one of the most inclusive Whitney Biennials in history. Afro-Boricua artist Daniel Lind-Ramos, who hails from Loíza, is one of the standouts of the exhibition. With three unmissable pieces in the show, his name made its way to the “best of” lists of some of the top art publications in the country.

“If there is a breakout star here it may be Daniel Lind-Ramos, who is in his mid-60s and whose cultural-specific sculpture is better known to citizens of his native Puerto Rico than to those in the US [mainland],” wrote the Art Newspaper. Earlier this month, he described his hometown as a place where he was steeped in Afro-Latino culture, a place “full of joy, with traditions, culinary and artistic expression stemming from an economy based on the coconut palm tree.” This sense of place makes its way into his work.

Exhibited on loan from his San Juan gallery Embajada, Lind-Ramos’s three sculptures included in the Biennial are assemblages of found objects on his home island, debris dispersed by the hurricane: coconuts, scraps of wood, FEMA tarp, palm fronds. “Maria-Maria” is installed forebodingly in the corner of one of the museum’s galleries. The sculpture evokes the merciless neutrality of a goddess who has the power to give as well as take. The New York Times described it as a sort of Virgin Mary, a piece that was not created for the art market but for the people.

“Centinelas” is another singular work at the show by Lind-Ramos, a representation of the indigenous fighters who beat back British colonial forces in the late 18th century. The figure is armed with a humble machete, a baseball mitt, makeshift weapon, decorated proudly in imagined battle garb, serving not only as a memorial to the island’s Afro-Caribbean history but also as a reminder to the people of Puerto Rico that they come from a place of great strength even in the most difficult of times.

“I think Puerto Rico was really on our minds just because, obviously and unfortunately, it’s been in the news a great deal due to Hurricane Maria,” one of the show’s curators told Artnet, explaining their decision to include the work of Lind-Ramos along with several other Puerto Rican artists. “But also because this idea of history and how it influences the present was a theme that emerged very early on for us in terms of the work we were looking at.”