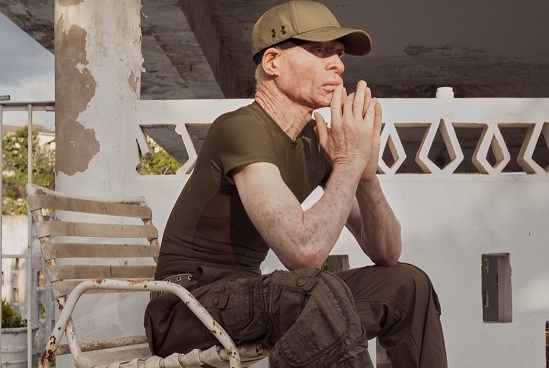 Climbing quiet, verdant hills that lead to a house peeking over a rambunctious Kingston, I visit Winston Foster, popularly known by his stage name Yellowman, to discuss a musical career spent attracting the affection and ire of reggae fans. In the early eighties, after the death of Bob Marley, fans of Jamaican popular music were impatient for a new star that embodied Marley’s rebel style and roots-reggae sound. What they got was Yellowman, an albino who delivered rebelliousness through an irreverent, comic, catchy style over an assertive new sound named dancehall. And although political concerns drove some of his songs, what most steered them was his ribald lyrics—termed “slackness” in Jamaica—which propelled him to global fame, and, perhaps, helped shift how some saw albinos. Often mistreated and made alien—scorned as if they were lepers whose condition were contagious—albinos were now, in Yellowman’s songs, a sex symbol. “Hi, my name is Yellowman. And in the ghetto they call me Mr. Sexy.” So begins one song in which the albino toaster repeats the boast, “Them a mad over me… girl a go crazy over me.” Its bawdy flavor notwithstanding, the song uses humor to push against the borders of listeners’ imagination. “Albinos were never on the forefront of society,” he tells me, as he speaks of using music to “break down that barrier.” In his voice was the defense, not only the pleasure, of many.

“I’m a soldier,” Yellowman declares early in my visit, and repeats shortly before I leave, as if to bookend our conversation with an image he wants to inscribe in my memory. But he need not insist: it was his perseverance, his dogged resistance against obstacle after another, that brought me to his home. In 1984, as he jumped on the global stage, he was diagnosed with cancer and given a few years to live. Corrective surgery took away the tumor and a significant portion of his face, but seemingly none of his wit or fight. He’s still here. Still here: that phrase, said to me with gumption and gratitude, had the ring of a mantra. “I can’t stop. I cannot stop. I don’t see myself stopping because I grow with this in me, music. This talent is not influenced by anybody, this talent handed down to me by the Almighty.” That’s him, assuring me that he’ll never stop performing, reinforcing his belief that music is bound up in his DNA, as if by divine fiat.

In performance, he is boundless energy—running, jumping, dancing, even doing pushups between songs—reminding us that he has not merely survived, but that he is here to carry us along in his enthusiasms. (“When I tell them to jump, them jump. When I tell them to sing, them sing,” he marvels to me, delighted and amazed that this kid who grew up in an orphanage would go on to exert such influence over crowds in Jamaica, North America, Asia, Africa). And in conversation, he’s funny, generous, warm; his verbal tics—“understand?”; “you know?”—extend a hand to make sure the interaction is a give- and-take, not unlike his call-and-response live performances. [. . .]