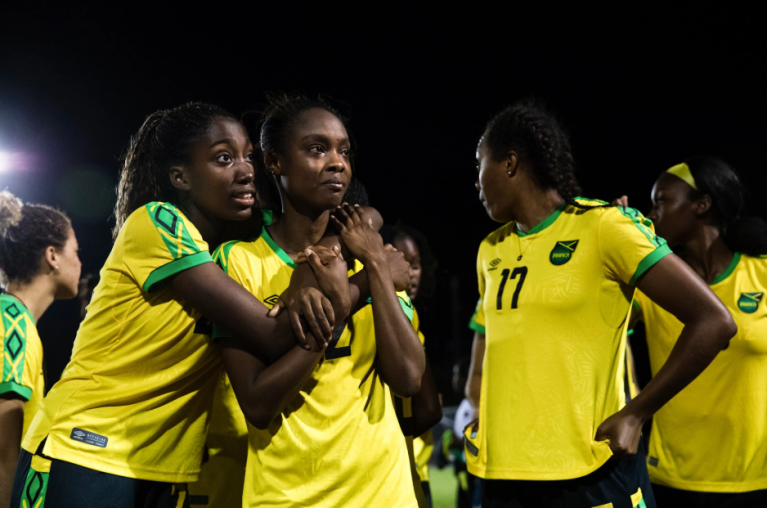 A report by Jeré Longman for The New York Times.

Jamaica’s consul general in South Florida held a party at his home on Wednesday night to celebrate the Reggae Girlz, the first national soccer team from the Caribbean to qualify for the Women’s World Cup.

The tables were set up around the pool and the players and their coaches were there, but every guest was asked to bring a little something extra: a donation of at least $100 to help Jamaica complete its preparations to compete at the World Cup in France next month. The tournament begins in less than two weeks, and so time, just like money, was short.

If the story of women’s soccer in recent years has been the ongoing fight for equal pay, there always has been a different inequality just below the surface. While women’s international soccer has made significant progress in some countries, support for it, especially financially, from individual federations and corporate sponsors continues to vary widely.

France, the host country for this year’s championship, has a thriving professional league, and its players have spent the last few weeks preparing for the World Cup at their federation’s national training center. The United States, the defending champion and a three-time winner of the tournament, is completing an opulent send-off tour across the country this weekend, replete with nationally-televised games on ESPN and giant billboards on big-city buildings.

Jamaica’s run-up to the World Cup, by contrast, has been much less visible, and its program’s mere existence far less financially secure. Historically, the Reggae Girlz have received tenuous support from their national federation. As recently as 2015, the federation cut off financing for the team entirely.

As a side trip on their road to France then, Jamaica’s women first detoured to South Florida, trying to raise money one contributor at a time to cover a shortfall — as much as $400,000 by one estimate — created by training camps, travel and warm-up matches, and to begin to establish a reserve that the team can draw on for current and future tournament costs. There was a fund-raiser and an auction of sports apparel at the consul general’s home; a pep rally at a chiropractic center; and an exhibition match on Thursday night preceded by a celebrity game featuring entertainers from Jamaica and Haiti.

But signs of the team’s struggles weren’t hard to find. At Wednesday’s party, the coaching staff wore shirts meant for the men’s national team, and used markers to scratch out that team’s nickname — “Reggae Boyz” — on the sleeves. Some Jamaican players still must buy their own cleats. And when the women’s team qualified for the World Cup last October outside of Dallas, several coaches went to Costco and paid out of their pockets for jackets so their players could train in the chilly, rainy weather.

No high-ranking official from the Jamaican federation was present to celebrate that momentous qualification in a penalty shootout against Panama, the team’s coaches said.

“Their attitude has been pretty poor,” goalkeeper Nicole McClure, 29, said of the Jamaican soccer federation. “We’ve always been an afterthought, and we’re still fighting for equality. We want a seat at the table. It’s been quite frustrating.”

In March, McClure, who grew up in Queens, held her own fund-raiser. She plays without compensation on a club team in Northern Ireland, and she needed money to pay for food, toiletries, a bus ticket, checked baggage for a flight and some soccer gear. Her needs were not uncommon for her team.

Yet she and her teammates — and Jamaica’s coaches — acknowledged this week that things are improving, at least for the moment. Jamaica’s World Cup players have signed a contract with the federation that will pay them $800 to $1,200 a month, retroactive to January, Coach Hue Menzies said. And Menzies, who has been working free since 2015, is to receive $40,000, he said. According to team officials, this is the first time a Caribbean women’s team has signed contracts with its national federation.

“We haven’t been paid,” Menzies said with a laugh. “But we signed a contract.”

Michael Ricketts, the president of Jamaica’s soccer federation, said that criticism of the organization had been “grossly unfair.” The federation has spent about $4 million on the women’s team since it began qualifying for the World Cup, he said. Costs to hold a weeklong training camp can run to $100,000, Ricketts said, and it has been a struggle to get spectators and corporate sponsors to embrace the team. Even so, he said, a women’s league in Jamaica has been restarted on a limited basis, as well as a youth program for players under 15.

Instead, coaches and players widely credit a different benefactor, Cedella Marley, for resurrecting the women’s team with help from the Bob Marley Foundation, which is named after her musician father. Cedella Marley, angered by the sorry state of the program, was the one who spearheaded an international fund-raising effort to revive it several years ago, and she was the one who persuaded Menzies, who runs a prominent youth soccer club near Orlando, Fla., to become its coach.

Without Marley, McClure said, “There would be no Reggae Girlz.”

The Alacran Foundation, a philanthropic organization, also has become a benefactor of the team. And the Reggae Girlz Foundation, a nonprofit, is raising money for such things as medical equipment to help Jamaica prepare and compete at the World Cup, but also to support the team in coming Olympic qualifying and youth national team campaigns.

Money remained tight, though, as the team departed Friday for Europe, where it will play a warm-up match in Scotland before continuing on to France. Even after an initial payment of $480,000 from FIFA, soccer’s world governing body, for qualifying for the World Cup, and another payment of at least $750,000 to follow, Jamaica’s buildup to the tournament has faced about a $400,000 shortfall to cover costs of training camps, travel and practice matches, according to Lisa Quarrie, the vice president of the Reggae Girlz Foundation.

Long-term, the foundation is seeking to sustain women’s soccer in Jamaica by creating an academy, building an extensive youth development system and persuading men’s teams in the National Premier League, the country’s top division, to also sponsor women’s teams.

But first things first. The World Cup starts in two weeks, and no donation is considered too small, be it a $10 ticket to Thursday night’s celebrity match or a $25 contribution on the website of the Reggae Girlz Foundation.

“They need money all the way around,” Quarrie said. “We’re going to the World Cup on the fly.”

Women’s international soccer has long faced a Sisyphean battle to gain respect and support. The American women’s team continues to find it necessary to sue U.S. Soccer for gender discrimination. Players in Australia and elsewhere have refused to play matches, and stars in other countries went public with complaints on everything from training pay to a lack of games.

It has been a particularly tough slog in the Caribbean, where soccer has been blighted by corruption, and the women’s game especially has been widely dismissed. When Trinidad and Tobago arrived in Dallas for the final qualifying round of the 2015 Women’s World Cup, its coach, Randy Waldrum, sent out a financial S.O.S. via Twitter.

“I need HELP!” Waldrum wrote at the time. “T&T sent a team here last night with $500 total. No equipment such as balls, no transportation from airport to hotel, nothing.”

Haiti’s women’s team also attempted, just as futilely, to qualify for the 2015 World Cup, relying on benefactors at an extended training camp in South Bend, Ind. Its players and coach received no salary, and the team tried to make ends meet by selling rotisserie chickens and T-shirts, and holding clinics for churches and schools.

In Jamaica, soccer has been considered by many to be too rough of a sport for women and not sufficiently feminine. Players and officials hope that this summer’s World Cup appearance will help overcome the cultural stereotype, and that women’s soccer will be elevated at home in the way track and field became appreciated with the success of the sprinter Merlene Ottey, who won nine Olympic medals between 1980 and 2000.

“The men have always received far more support,” said Oliver Mair, Jamaica’s consul general for the Southern United States. “So when the women qualified for the World Cup, it caught us all by surprise.”

He added: “When you start on the road, you are on your own. They had a dream, a vision. They started to do well and more people have come on board.”

For now, Menzies and his staff have countered the lack of resources inside Jamaica by helping to place top women’s players at American universities and high schools, and in leagues in the United States and Europe.

Jamaica’s star forward, Khadija Shaw, known as Bunny, attended Tennessee, where she was the Southeastern Conference’s offensive player of the year in 2018. She, perhaps more than any other player, represents the indomitable perseverance of the Reggae Girlz, having maintained her career despite the deaths of three brothers in gang-related violence in Jamaica.

She added: “Nothing was handed to anybody here.”

The goal for the Reggae Girlz at the World Cup is to advance out of a forbidding group that includes Brazil, Australia and Italy. Lingering is the question of whether the Jamaican federation will provide the necessary support to keep women’s soccer growing as an international power after the tournament ends.

Asked how confident he was in the federation’s long-term commitment, Menzies, the coach, said, “Not very.”