The Tropical Audubon Society’s online Bird Board said it all:

“Red-legged Thrush. Lantana Nature Preserve; many birders on it.”

That was enough to send birdwatchers flocking to Lantana Nature Preserve recently when the bird, seen only one previous time in North America, was spotted.

The red-legged thrush was seen April 25 by a man from Arizona who photographed it at 7 a.m. At first, he thought it was an exotic species, but confirmation from two other birders revealed what he had found, a news release said.

Word of the sighting was spread through online messaging and the birding website eBird, and birders and photographers lined up to see the bird until the preserve’s closing that evening.

Birders arrived the next day, but the bird had moved on and has not been seen since. “You have to try and come as quickly as you can when the alerts go out,” said Paul Waller, who was one of the first to respond to the alert.

The red-legged thrush, a non-migratory Caribbean species, is a blue-gray bird with a bright orange-red eye-ring and red legs. It is found mostly in the Greater Antilles and Bahamas, but also on Dominica, in the Lesser Antilles. The bird has a tendency to turn its tail somewhat upwards at least part of the time, and likes to walk or run, but will fly away if disturbed. It is found in different forested habitat with some differences in preference among the islands, but tolerates disturbed areas such as partial cutting or second growth. 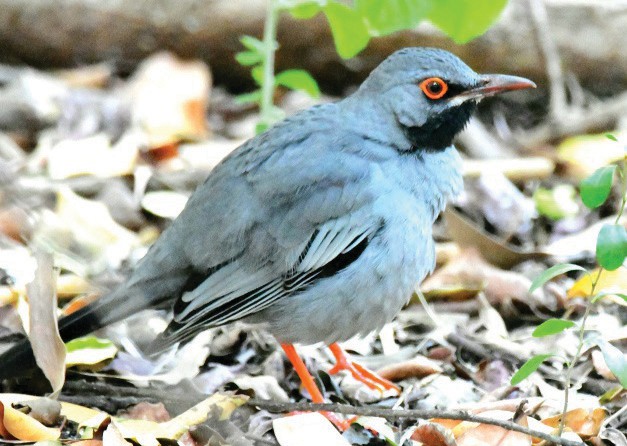 Audubon Everglades, the Palm Beach County chapter of the National Audubon Society, said the Lantana Nature Preserve is a magnet for rare and migrating birds. Recent rarities to visit the preserve included a white-crowned pigeon, a Key West quail-dove and a Bahamian mockingbird (the Bird Board noted that the mockingbird was still at the preserve at the time).

In February, a dark-billed cuckoo was discovered at West Delray Regional Park. The cuckoo’s range is limited to South America, and news of the second official North American sighting spread quickly via instant messaging. The cuckoo stayed for five days, permitting hundreds to see it.