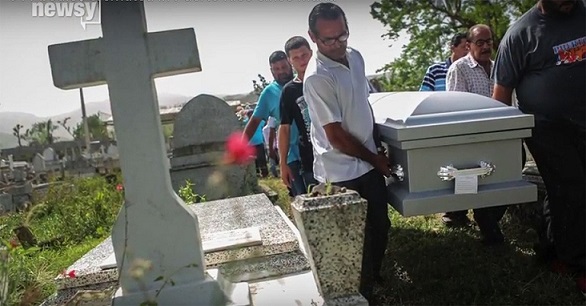 The full title of this article by Denise Oliver Vélez is “Cutting off Puerto Rico’s Medicaid is not a ‘fiscal cliff.’ It will push people off a cliff—to die.” Here are just a few excerpts; please see the full article at Daily Kos.

After Hurricane Maria devastated Puerto Rico in September of 2017, we saw photos like the one above, of funerals across the island. The disaster death toll post-Maria was the highest in modern U.S. history.  What is distressing, and almost unfathomable, is the fact that we are heading toward an even higher death toll—and this one will be completely man-made, and preventable.

I want us to start talking, hollering, and pressuring the Senate about the dire consequences facing our fellow citizens in Puerto Rico—now.

Not at the last minute.

Not after the damage has already been done.

More than 1 million Puerto Ricans are already seeing cuts to food stamp benefits. Democrats’ fight being waged with Trump and McConnell over disaster aid funding has not succeeded. I’ve read articles with headlines that talk of the “Medicaid fiscal cliff” for Puerto Rico—which don’t convey the severity of the disaster in the making. There are going to be a lot of Puerto Ricans who will be doomed to die if they lose both medical treatment and the life-sustaining drugs they need.

That “fiscal cliff” is the cutoff of additional money that increased coverage on the island until September 2019.  When the money goes, at least 900,000 people will lose coverage.

This is not simply a matter of “Oh well, they will have to flee the island and move to the mainland.”

It is not just “Oh well, they should become a state,” as if the status issue is going to be resolved any time soon.

And though some Democratic presidential candidates have mentioned Puerto Rico, or talked of future plans, those words don’t translate into medicine and treatment, while Trump continues to use PR as a punching bag to rile up his base.

What is going to happen will kill more people than Hurricane Maria did—unless we begin to take action NOW. [. . .]

While the threat of mass migration to the mainland is real, if people on the island lose health coverage, that is not a viable option for far too many Puerto Ricans. They may be too old, too sick, too poor, and too afraid to leave what little they have to face relocation. Many will choose, or be forced, to stay, and die, when they lose the medicines and treatments keeping them among the living.

This is not hyperbole. This is about the reality Puerto Ricans are facing. The stress for so many who see the months going by and the cutoff date approaching is something I can’t even begin to communicate in just words. That stress is doubled and tripled by the knowledge that nothing is being done by the U.S. government.

There is anger. There is fear. There is depression. There are feelings of total abandonment.

Yes, there are those who soldier on, and no longer expect the national or local government to do diddly-squat, those who either are attempting to go it alone or are receiving aid from a wide variety of charities. However, charities cannot ever replace those who are ultimately responsible for Puerto Rico: the government of the United States of America.

It is April. Congress has gone home. It will also be gone the entire month of August.

I dream of a day when people across the U.S. will give a damn. Sadly, I doubt I’ll ever see those dreams become reality.

It will always be too late if it is only going to be “heartfelt thoughts and prayers.”

Prayers will not raise the dead.

I wonder: Who among the living has the power to stop this tragedy before it happens?