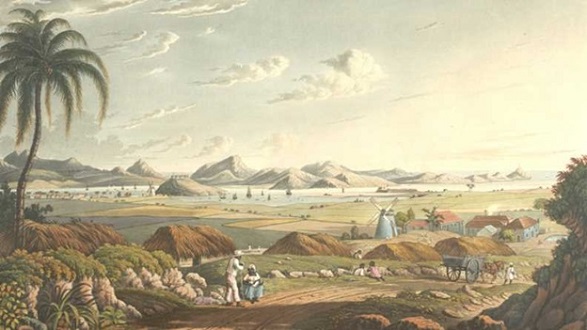 [Many thanks to Peter Jordens for bringing this item to our attention.] Adaptations des textes littéraires américano-Caraïbes: formes et enjeux [Adaptations of American-Caribbean Literary Texts: Forms and Issues] is a conference to be held from November 20 to 22, 2019, at Université des Antilles in Schœlcher, Martinique. The deadline for proposals is April 30, 2019.

Summary: This three-day conference examines the issues and different forms of literary adaptations in the American-Caribbean space. The purpose is to of reflect on the ways of adapting and interpreting original work but also on the various strategies adopted by artists in search of re-grounding of an aesthetic, social, political, or literary nature.

Description: Whatever its forms and the orientation of its commitment—be it reflexive, injunctive, factual or fictional—the literary text is comprehensively received by the reader as a representation of the habits and customs of a society at the heart of a given spatio-temporal context. As a result, the collective memory that it summons through its plurivocity, leads us to think of the American-Caribbean particularities of memory, whose interdisciplinary dynamism, image in art, beyond a literality, includes the expression of silent, yet not static, cultures. To approach this through an innovative and bold look at rewriting history, to reach the boundaries of the cosmogonic myth, is to conceive of the surmounting of a lacunar memory, maintained by the incompleteness of the political, artistic, or scientific text.

By virtue of the principle “Every writing is a palimpsest,” as Gérard Genette argues, in Palimpsestes, all memory (with literature in the second degree) induces a “metatextuality” and a “hypertextuality” of literary texts, which—through their adaptations—are as much a re-appropriation of the main text as an appropriation of the myth.

If the world of letters deems to recognize it, by conceiving the multiplicity of artistic forms that it inspires in the so-called visual or theater arts, among others, the danger of the denaturation of the original text presents questions. How can one be, for example, close to the text, with a hindsight on the vision of “the writer”? It is clear that some approaches show the forms and problems of adaptation.

Cinematic discourses focusing on the causalities of colonialism prove to be, in this capacity, rather eloquent, given the remarkable transposition they make of great novels, such as: Roots by A. Haley, Beloved by T. Morisson, The Hate U Give by A. Thomas, P. Lins’ Cidade de Deus, J. Zobel’s Rue Cases-Nègres, or E. Guevara and A. Granado, among others. The theater is also active in this area, especially through the adaptation of the short story by E. Danticat, The Children of the Sea. [. . .]

Possible topics: Forms and stakes of American-Caribbean free speech; difficulties in interpreting the original to the translation from literary fact to artistic adaptation; intertextuality; strategy of the creation or re-creation and its stakes; from the space of the page to the stage space; reception of works in the American-Caribbean space; and languages, languages and signs in the process of transformation.

Guidelines: Proposals for papers should be sent to the following address: colloque.adaptations2019@gmail.com. They should include the title of the paper, a summary of 500 words maximum, and a brief bio-bibliographic note specifying your institutional affiliation. Contributions to this multidisciplinary symposium will be in the form of 20-minute academic papers.

Participation in the colloquium can be performed by videoconference.