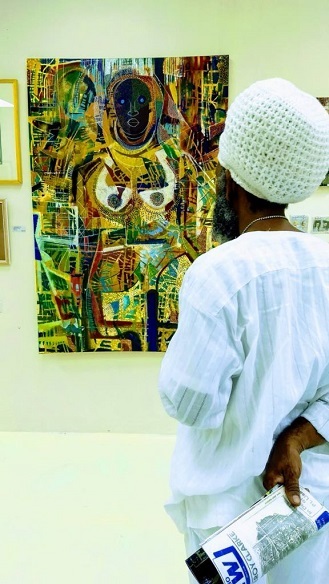 In “The art of obeah,” Shereen Ali (Newsday) reports on Convois 2019, a tribute to artists Winston “Shadow” Bailey and Leroy Clarke, launched on March 19 at the Lloyd Best Institute of the Caribbean in Tunapuna, Trinidad. [Many thanks to Peter Jordens for bringing this item to our attention.]

“Ase, Ase, Ase” rang through the air at the opening prayers of Convois 2019, a two-week tribute to artists Winston “Shadow” Bailey and Leroy Clarke hosted by the Lloyd Best Institute of the Caribbean in Tunapuna.

The Convois this year celebrates the art of Shadow and Clarke who both used ideas of obeah to spiritually inspire and shape their art. [. . .] The term “Ase” is a West African concept through which the Yoruba of Nigeria conceive the power to make things happen and produce change. It’s a power for change and action that this year’s Convois hopes to foster, starting from within the self. In celebrating obeah as an inspiration in the paintings of Clarke and the calypsoes of Shadow, the institute is reminding people of the power of our own indigenous belief systems as a basis for self-confidence, pride, healing and creative efforts.

An Egungun masquerade invoked the presence of the ancestors at the launch event, which was timed to honour the passing of Lloyd Best 12 years ago on March 19, 2007 at 73. [. . .]

Rawle Gibbons, in his opening remarks, spoke of the symbolism of “obi” (kola nut) as the seed through which believers can create the consciousness that connects us to time, to the world environment and to one’s own sense of purpose in life. “Convois is a term from our history, from the underworld organisations created by our enslaved ancestors to do the same things that obeah does, to connect us with our past; but more than that, to strategise and to create actions out of our coming together. And if that is what obeah is, then our problem is not obeah, it is the absence of obeah. Because we still need to strategise and to make things happen,” said Gibbons.

The new institute director, Carmel Best, said for her family, March 19 is always a bittersweet time because it reminds them of the date of their father’s passing. However, she celebrated the institute as an organisation that seeks to understand, learn and teach about Trinidadian and Caribbean society. That is part of Best’s legacy: providing a space for indigenous expression and thought. [. . .]

Feature speaker for the night was Fazal Ali, who is a painter and academic as well as the driving force behind UWI’s Institute of Critical Thinking and the author of a 2017 monograph on Education for Liberty: The future is open to suggestions (available on Amazon/Kindle).

“At the heart of Clarke and Shadow is a black knot of troubling questions about development and douendom,” said Ali. [. . .] “The glorification of the Middle Passage by Turner in his Slave Ship (painting) is NOT the experience of our ancestors on overcrowded barracoons from India or Africa,” said Ali. Instead, he noted: “Like nail-holes of stars under a rusty galvanised roof, LeRoy Clarke and the Mighty Shadow are delineating a new passage. They are different drummers. They force us to ask: Where is our point of no beginning? The bonded indentureship, the slave ships, tamboo bamboo, Kambule rituals, enslaved Amerindians and embattled Europeans…this is our disaster. And we are yet to settle our joint enslavement and liberation. This is our common ground. Our failure to address these issues has barricaded the distinct groups that make up our society from evolving beyond the initial themes that have preoccupied us since we first arrived.” [. . .]

[Photo above: A guest takes in a 2019 painting by LeRoy Clarke titled Pray tell… Who Eye Be…Is Me.]