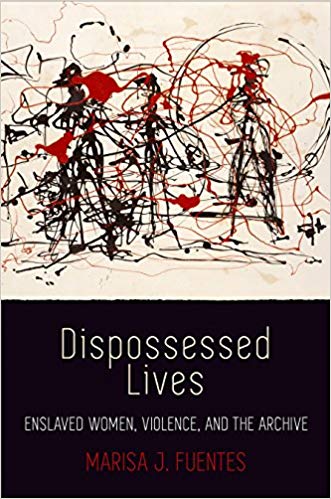 Jennifer L. Morgan (New York University) writes, “Dispossessed Lives exemplifies the best new historical scholarship on slavery and gender. Marisa Fuentes’s compelling study of women’s lives in and around Bridgetown leaves the reader with a clear sense of who these women were and how they navigated the terrain of a Caribbean slave society. At the same time, Fuentes’s engagement with the problems of the archive testifies to the powerful entanglements that constitute the afterlife of slavery. This is an important study that fundamentally reshapes the questions we are compelled to ask about the histories of slavery in the Atlantic world.”

Description (UPENN Press): In the eighteenth century, Bridgetown, Barbados, was heavily populated by both enslaved and free women. Marisa J. Fuentes creates a portrait of urban Caribbean slavery in this colonial town from the perspective of these women whose stories appear only briefly in historical records. Fuentes takes us through the streets of Bridgetown with an enslaved runaway; inside a brothel run by a freed woman of color; in the midst of a white urban household in sexual chaos; to the gallows where enslaved people were executed; and within violent scenes of enslaved women’s punishments. In the process, Fuentes interrogates the archive and its historical production to expose the ongoing effects of white colonial power that constrain what can be known about these women.

Combining fragmentary sources with interdisciplinary methodologies that include black feminist theory and critical studies of history and slavery, Dispossessed Lives demonstrates how the construction of the archive marked enslaved women’s bodies, in life and in death. By vividly recounting enslaved life through the experiences of individual women and illuminating their conditions of confinement through the legal, sexual, and representational power wielded by slave owners, colonial authorities, and the archive, Fuentes challenges the way we write histories of vulnerable and often invisible subjects.