Puerto Rico has passed a bill to radically transform the island’s economy with renewable energy as the central pillar. The territory’s legislature today approved Senate Bill 1121 (PS 1121), the Puerto Rico Energy Public Policy Act, which will set the island on a path to 100% renewable energy by 2050. The bill pushes the island to become a leader in clean energy technology that can better withstand future hurricanes and improve quality of life for Puerto Ricans .

Receiving widespread political support, PS 1121 passed with bi-partisan support with 21 votes to 4 in the Puerto Rican Senate. The bill now waits to be signed into law by Governor Ricardo Rosselló in the coming weeks, who has already expressed his strong support for 100% renewable energy as part of his post-Hurricane María recovery vision and plan. Currently standing at just 2% of all electricity generation, renewable energy offers a cheaper alternative in Puerto Rico that can improve resilience to future natural disasters.

The bill’s impact is wide-ranging. PS 1121 establishes a 100% renewable energy portfolio standard (RPS) by 2050, bans coal plants starting in 2028, provides for automatic interconnection to the grid of customer-sited solar energy systems below 25 kilowatts, and reduces the utility approval time to 90 days for commercial and industrial solar projects. It also creates a 5-year window of full compensation for consumers’ solar energy production and streamlined permitting for utility-scale projects.

The changes are intended to create a more resilient island built upon state of the art technology that transcends the diesel and coal-fired centralized generation electricity model, towards a clean, more decentralized energy system with local, renewable resources at its center. PS 1121 also aims to empower prosumers –  customers that both produce and consume energy – with stronger policies on net metering and interconnection of solar, storage and microgrid projects.

Additionally, the PS 1121 bill establishes that solar energy users will have access to net energy metering within one month of a system’s installation, clarifies that the existing net energy metering policy shall be in place for no less than five years, and that new solar consumers will be grandfathered and protected from future policy changes for the next 20 years. The bill also exempts solar electric storage equipment from sales taxes and grants the Puerto Rico Energy Bureau more fiscal autonomy and powers to perform performance-based metrics, among many other innovations. 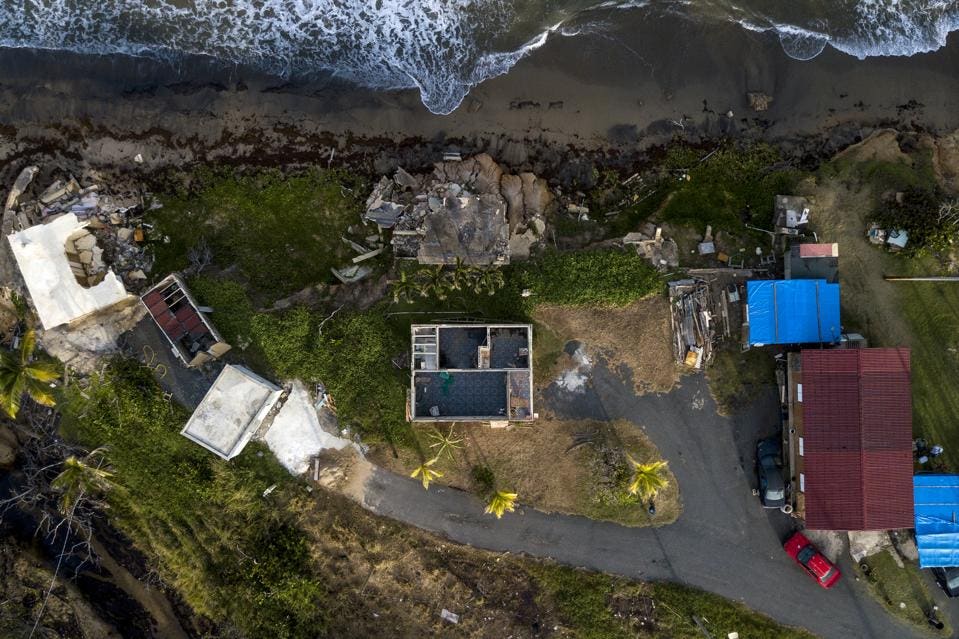 Homes damaged by Hurricane Maria are seen in an aerial photograph taken over El Negro, Yabucoa, Puerto Rico. One year after Hurricane Maria slammed ashore in Puerto Rico, decimating the island’s power grid, ripping the roofs off houses and causing the deaths of almost 3,000 people.

“This bill is a huge step in building a sustainable future for Puerto Rico”, said Senator Eduardo Bhatia, a leading proponent of PS 1121, “now we can move forward in developing an economy built on strong foundations that will provide more opportunities for future generations. By embracing renewable energy, our islands can reduce the reliance on fossil fuels, benefitting both the natural environment and our economy.”

Despite being one of the poorest parts of the United States, Puerto Rico is home to one of the highest costs for electricity in the country – islanders pay over double the rates paid by their relatives in Florida. This is largely due to the high cost of shipping in fossil fuels to run the highly polluting diesel generators. It also means the island has a highly centralized grid system that leaves it vulnerable to outages in storms. On average, households went 84 days without electricity after Hurricane María, but in the most isolated regions some waited almost a whole year to be reconnected. The bill aims to reduce prices and reduce the risk of such an outage happening again.

Renewable energy companies have greeted the news with enthusiasm. President of the Solar & Energy Storage Association of Puerto Rico (SESA-PR) P.J. Wilson said, “Policymakers have listened to the solar and storage industry leaders’ input. PS 1121 eliminates many of the barriers that have frustrated solar deployment for years and creates a strong vision for ramping up clean energy, but implementing the law will require strong continued industry collaboration before the utility’s regulator and other agencies.” SESA-PR is next month organizing the Solar Power Puerto Rico conference, which will be a rallying point for industry leaders to discuss next steps after PS 1121. 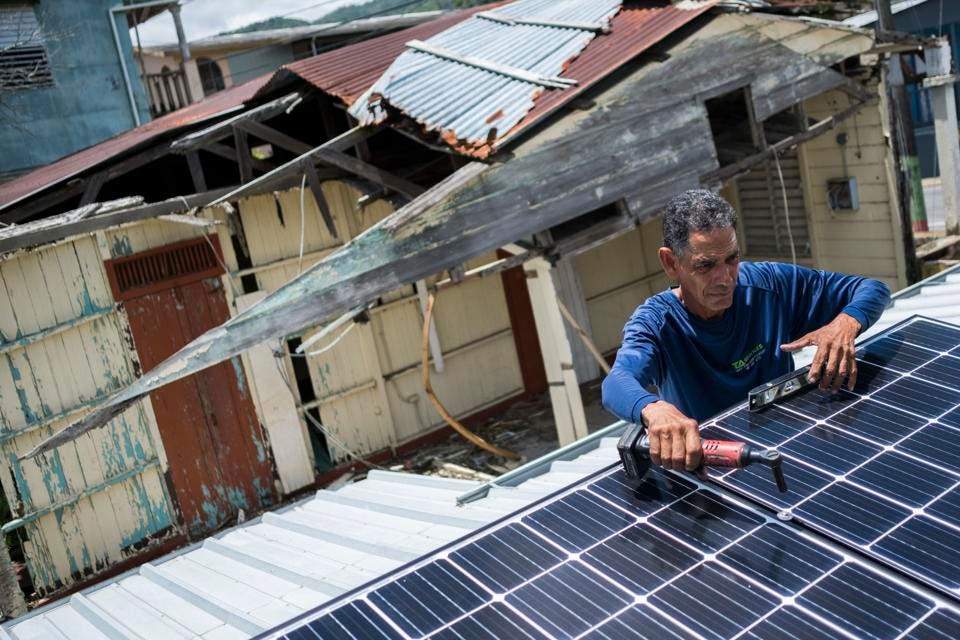 In July 2018, Julio Rosario installs a solar energy system at a home in Adjuntas, Puerto Rico. The nonprofit environmental group Casa Pueblo has installed solar systems at two hardware stores, one barber shop and several corner stores that activists hope will serve as a power oasis where people can charge their phones and store medications during a storm if needed.

Residential solar company Sunrun is a SESA-PR member that supported the bill. CEO Lynn Jurich said, “Today is a win for all Puerto Ricans. Leaders like Governor Rosselló have embraced clean energy technology like home solar and batteries ever since the deadly hurricanes in 2017 devastated the island and its entire electricity grid. This critical legislation will create local jobs, grow the economy, and enable even more Puerto Ricans to have access to clean, resilient, reliable energy for their homes.”

Puerto Rico now faces the challenge of implementing the ambitious goal to reach 100% renewable energy, the most pressing of which are changes for the island’s utility. The Puerto Rico Electric Power Authority (PREPA) had issued a draft proposal to break the grid into eight “mini-grids” powered with renewable energy and battery storage. The plans had largely ignored domestic solar and were rejected by regulators who called for a greater role of distributed generation. PREPA is $9 billion in debt and proposals to dismantle and privatize the utility have been a controversial debate on the island.

Puerto Rico is on the road to recovery with a new program that will provide a more stable and secure future for the island. Renewable energy is a pathway to both environmental and economic security that could avoid the worst of future hurricanes that are expected to become stronger and more frequent due to climate change. Puerto Rico’s own Green New Deal is providing a hopeful future for the island .