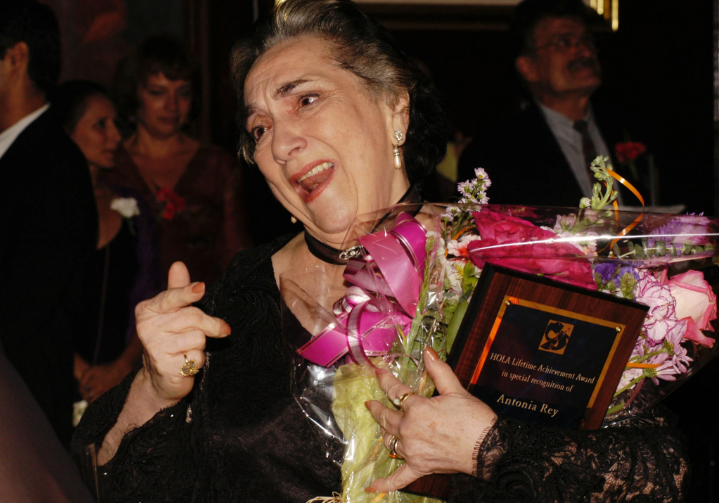 An obituary by Katharine Q. Seelye for The New York Times.

In her native Cuba in the 1950s, Antonia Rey was a leading lady of the stage, playing Madge in William Inge’s “Picnic,” the title character in George Bernard Shaw’s “Candida” and Elizabeth Proctor in Arthur Miller’s “The Crucible.”

But when Fidel Castro came to power in 1959 and established a Communist dictatorship, Ms. Rey and her husband, Andres Castro (no relation), a prominent theater director, were forced to consider their options: Stay in Cuba, secure in their theater world but living under a repressive regime, or flee to the United States.

Ms. Rey, who died on Feb. 21 at 92, went on to become a busy actress in New York, with scores of small parts on the stage (including in “A Streetcar Named Desire”), in movies (“Klute”) and on television (“Who’s the Boss?”).

But with few leading roles available for Hispanic actresses in the New York theater world of her era, she would not regain the stature she had achieved in Havana. Still, she did not regret leaving.

“She never complained about it,” her niece, Nina Rangel, said in a telephone interview. “She had her freedom, and she followed her passion.”

In Cuba, Ms. Rey and her husband had been a high-profile couple, and Castro had tried to entice them to stay. He promised them they could run the National Theater, where Ms. Rey could have her pick of roles and her husband could be its director.

But the harsh reality of living under Communism became clear as the government began expropriating land and property. Ms. Rey and her husband knew they had to leave.

They joined the first wave of Cuban exiles, many of them wealthy professionals. They had visas and could board flights to Miami, though they could take nothing with them except the clothes they were wearing.

“She said her hair turned gray that day, there was so much stress,” Barbara Eda-Young, a close friend and fellow actor, said in a telephone interview. “She used to say, ‘Cuba is a four-letter word.’ ”

Most Cuban exiles settled in Miami, but Ms. Rey and her husband continued on. They wanted to restart their lives in New York because it was the center of the theater universe, though they had no family or friends there.

She was able to get into acting fairly quickly. “She met someone who got her a small part, and one thing led to another,” Ms. Young said.

Her Broadway debut came in 1964, when she landed a role in the chorus in “Bajour,” starring Chita Rivera. She played a Mexican woman in “A Streetcar Named Desire” and had small roles in two other productions of Tennessee Williams plays, “The Rose Tattoo” and “Camino Real.”

She appeared in 30 movies, including as the landlady in “Klute,” a 1971 crime thriller with Jane Fonda. Other films of hers included “Hair,” “Moscow on the Hudson,” “Coogan’s Bluff,” “The Lords of Flatbush” and “Jacob’s Ladder.”

Television was also fertile ground for her, and she won small roles in sitcoms as well as soap operas (“As The World Turns,” “All My Children”), police procedurals (“Law and Order”) and the TV-movie pilot for “Kojak.”

Like Miriam Colon, an actress from Puerto Rico who died in 2017, Ms. Rey was a go-to choice when scripts called for Latina characters, and in the 1960s, ′70s and ′80s they were almost always minor roles. American theater, movies and television were slow to integrate ethnic characters into their plot lines, and the roles that did exist were rarely the leads.

Ms. Rey was often chosen for Italian roles as well, often playing mothers and grandmothers, Gypsies and fortunetellers. Her face became so familiar, Ms. Rangel said, that strangers would often stop her and ask, “Aren’t you that woman who … ?”

Maria Antonia Rey was born on Oct. 12, 1926, in Havana. Her father, Antonio Francesch, a dentist, died before she was born. She was given the surname of her mother, Emilia Rey.

Her grandmother raised her while her mother studied to become a nurse. When Antonia was a teenager, her mother married Rafael Rangel, a banker, and they had two sons.

In addition to her niece, she is survived by one of her stepbrothers, Emilio Rangel. Rafael Rangel died in 1998, and Andres Castro died in 2000.

Antonia had always wanted to be an actress, but her mother’s new husband did not approve of the theater, Ms. Rangel said. He directed her to go to law school at the University of Havana, where Fidel Castro was a fellow student.

“She always called him ‘Dirtball’ because he was always grungy and not a nice person,” her niece said.

Ms. Rey dropped out of law school early on to pursue acting. She made her stage debut in Havana in 1948 and soon met Andres Castro, the son of an affluent Havana family that owned a furniture store. He also owned a theater, Las Mascaras, and the two began working and living together. They married in 1958 during the intermission of a show they were rehearsing.

In New York, her husband opened the West Side Repertory Theater on West 81st Street in Manhattan and directed it for 25 years. It closed in 2001, after he died. She lived on the Upper West Side.

In 2003, Ms. Rey received a lifetime achievement award from the Hispanic Organization of Latin Actors.

She continued working into her 90s. In December, she finished the second season of a series called “Happy!” for the Syfy Channel, in which she played a witch.

After taking her niece to the theater one night in mid-February, Ms. Rey, who had not been feeling well, was taken to a Manhattan hospital, where she later died of natural causes, Ms. Rangel said.

But earlier, in the waiting room, a stranger had recognized her.

“I know you,” the man said, by Ms. Rangel’s account. “You’re a really good actress!”