A report by Aimée Lewis for CNN.

Her heart racing and stomach tightening, Celine Marti stands in the start gate and focuses on her breathing. With seconds to go, she looks out at the vertiginous slope in front of her and thinks about her daughter, her parents, and the Haitian people she is representing. Against the odds, she has made it.

The clock starts beeping. She flies out of the gate and down the mountain. She feels liberated.

As the 39-year-old crosses the finishing line, she raises her arms and charms the crowd with her infectious smile. It is, she says, an “explosion of the senses.”

Marti finished 52nd in her race, the slalom at last month’s World Ski Championships, over a minute behind champion Mikaela Shiffrin. Two days earlier, she had come 82nd in the giant slalom. But her participation in Are, Sweden was never about winning. She doesn’t ski to win. It is about love, determination, overcoming adversity.

“I have a saying: If you have a dream, you walk and you go,” the Haitian tells CNN Sport. “The start of the race is a difficult moment, but when you arrive at the end it is so exciting. I love the difficult things. That’s my spirit.”

As a baby Marti, who will be 40 in April, was found on the streets of Haiti by missionary workers. She was adopted by a Swiss couple from Geneva who ignored warnings that the then nine-month-old was not expected to live for much longer.

“It’s difficult to know exactly what I had, but I wasn’t in good health,” recalls Marti, who now has an adopted child of her own and works as a police officer in Geneva airport. 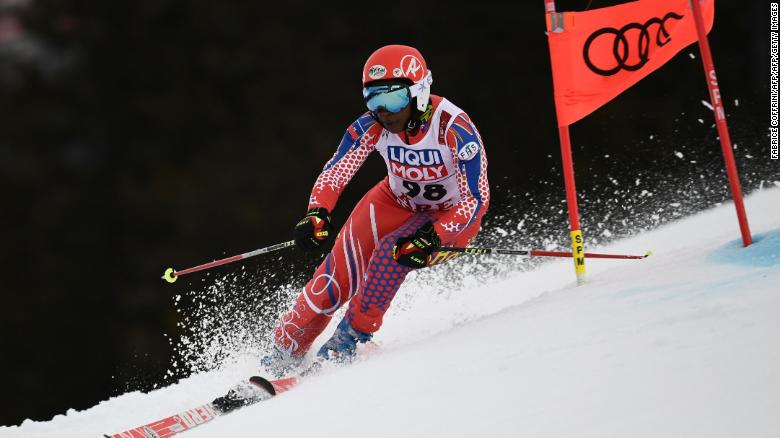 Marti competing in the giant slalom at the 2019 FIS Alpine Ski World Championships in Are.

‘I made my dream happen’

With the love and support of her adoptive parents, Marti was encouraged to pursue any sport or hobby she wished. At a school camp she skied for the first time and immediately fell in love with it. She was hooked. During school holidays she would head for the slopes, taking the bus alone to Saint-Cergue, a small ski station close to Geneva, and eventually started teaching at her local ski school.
In 2016, while competing at the Haitian ski championships in France, she met Thierry Montillet, a member of the Haitian ski federation, who persuaded her to represent Haiti at the World Ski Championships in St. Moritz in 2017.
Her achievements have since been covered in the country of her birth where, Marti laughs, journalists have to explain what skiing is.
She sees herself as representing both Haiti and Switzerland, and though she says she doesn’t see color, Marti acknowledges she is one of few black Alpine skiers. “I would like to prove that if you love the discipline, it doesn’t matter for the color or origin. If you love it you go,” she says.
“I had this chance of a new life and I profited to the maximum. I made my dream happen.” 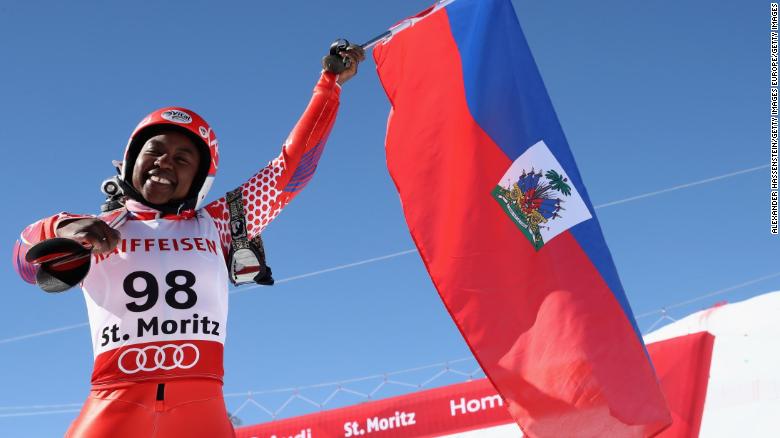 Marti waves her national flag at the finish area in St Moritz.

Marti has only returned once to Haiti, the poorest country of the Americas, according to The World Bank, to adopt her daughter, Joanne, nine years ago. Now aged 10, Joanne and her mum ski together and, sometimes, even compete together on the slopes in Switzerland.
As she is not a professional, Marti cannot afford to race or train as often as she would wish. Time on the snow is restricted to the weekends as ski passes are not cheap. Though her equipment is sponsored by Rossignol, it has been difficult to attract sponsors. “It’s difficult for me to ask for that,” she shyly admits.
“The Haiti federation is a small federation and we don’t have much [of a] budget and I need sponsors to help me. Of course I would like to train more, but I go by car to the mountain at the weekend. It’s difficult to go every weekend for training. With help I think I can achieve more. We try on a small budget to go to the maximum.”
Despite the financial constraints, the police officer’s regime is, nevertheless, relentless. Her dream is to compete at the Winter Olympics in Beijing in 2022 and, on listening to her speaking about her training routine, it becomes clear little will stop her achieving her ambition.
On a typical day, after taking her daughter to school, Marti will cycle to work and, following an eight-hour shift at the airport, will head to the gym. Often she will train alone, pushing herself to the limit. No-one can question her stamina because not only does Marti ski, but she also competes in triathlons, marathons and iron man events.
“As long as my body is OK, I will continue,” she cheerfully says. A landmark birthday may be approaching, but there is no stopping her.
“The next [World Ski Championships] is in Cortina in Italy and would like to go,” she adds.
“I would like to continue this dream and three years it’s the Olympic Games and it’d be the dream to represent Haiti in the Winter Games. I think it’s possible to see the Haitian flag in China.”