A report by Christopher Clarey for The New York Times.

Deservedly No. 1 in the world at age 21, Naomi Osaka has not made it past the round of 16 in her first two tournaments wearing the crown.

After stumbling at the first hurdle in Dubai last month, she won two matches here in Indian Wells before running into Belinda Bencic.

Though it is too early to start scurrying around the halls and sounding the alarms, it is not too early to observe that Osaka is in the midst of an adjustment process that could take more time to work through than she imagined.

In a little more than six months, the Japanese-American with Haitian roots has become a multicultural star with global reach, fired the coach who helped her zoom to No. 1 by winning two Grand Slam singles titles in a row, and hired a new coach who had yet to be a head coach at this level.

It is a lot to handle, a lot to digest, particularly with people like me poised to parse every performance for signs of trouble.

Bencic gave her plenty to digest, beating Osaka at her own game on Tuesday by taking time and the initiative away as she ended Osaka’s title defense in just 66 minutes in the round of 16 by the no-argument score of 6-3, 6-1.

“Naomi was rushed and didn’t have time to dictate,” said Chris Evert, an 18-time Grand Slam singles champion. “I don’t think Naomi had come across a player like that. All these big hitters like Aryna Sabalenka, and even Serena, are not that close to the baseline. They are two or three feet back. But Bencic plays an entirely different game, and she played a flawless match. She’s back, very back.”

The proof is in her 11-match winning streak, which includes a title in Dubai and five victories over top-10 players. Born in 1997, the same year as Osaka, Bencic has the skills to challenge her often in the seasons to come if she can keep her head and health together. Bencic will play fifth-seeded Karolina Pliskova in the quarterfinals on Thursday.

“I think at a time like this with that score line, I would usually feel very depressed and sad,” Osaka said at her surprisingly upbeat post-match news conference. “But I feel pretty good right now, because I think given the circumstances I tried my best, and I don’t really have any regrets. I tried to be positive throughout the entire match. Honestly, she was just playing so well.”

It was not Osaka’s first look at Bencic, who turned 22 this month. They first played in a small-money event in Alabama on clay in 2013, and Osaka beat Bencic, 6-3, 6-3, which came as a shock considering that Bencic already was a highly regarded junior player from Switzerland and that Osaka had barely played junior tennis at all.

But there was no catching Bencic by surprise on Tuesday. She already had beaten Osaka in straight sets at the 2018 Hopman Cup team event, which is technically an exhibition. And after reaching the top 10 in 2016 and then dropping back because of wrist surgery, she is playing with the point-by-point focus of someone who knows that tennis success, with all its trappings, is not a given.

“I know how frustrating it was when I wasn’t able to play at all,” Bencic said, sounding sage beyond her years.

Osaka sounds a bit wiser herself. The meandering, sometimes cryptic interviews of 2018 have given way to something more considered and open with occasional dashes of her trademark whimsy. 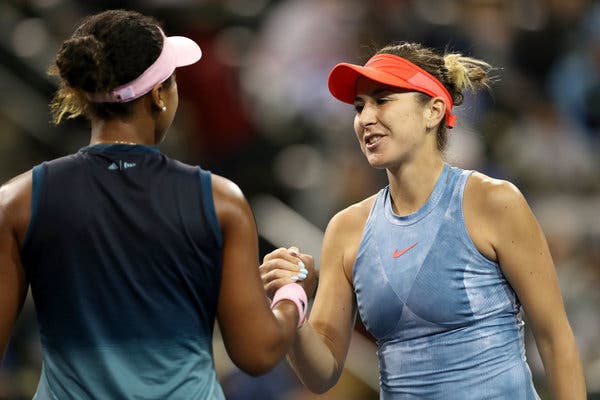 This is not a coincidence. She watched clips of her past news conferences and did not like some of what she saw: the “ums,” the “likes.” At this new stage, she greets questions, of which there are many, with respect, giving the impression that she is weighing each one before answering.

Asked to compare herself now with when she won Indian Wells as an unseeded player in 2018, she gave another measured response, even in defeat.

“I might have thrown a few tantrums last year,” she added. “And this year it’s something that I’m working on improving, and I feel like it’s going well. I think I’m just more confident in myself.”

Dismissing Sascha Bajin, her silken-voiced German coach, was certainly a bold move. Under his guidance, she defeated Serena Williams, Bajin’s former employer, twice in 2018: once in the first round in Miami and once under much more duress in the United States Open final. With Bajin still by her side, but apparently no longer in her confidence, Osaka fought through another rough-and-tumble draw to win the Australian Open in January.

Neither has explained their split in detail, although Osaka has said it was not a matter of money. She or some members of her team were looking for a lower-profile coach, but there were clearly personal issues at work, too.

“Something happened that must not have been good, although that’s just speculation,” said Evert, who often watched Osaka and Bajin train in Boca Raton, Fla. “They were laughing and having fun practices and teasing each other, and it was great, and then just before the Australian and after the Australian, it was tense.”

Bajin is gone now, replaced by Jermaine Jenkins, a former standout at Clemson University who spent several years as the main hitting partner for Venus Williams, who dismissed her coach, David Witt, and Jenkins in the off-season.

Jenkins was quickly hired as a national coach by the United States Tennis Association to work out of its national campus in Orlando. He was just settling in when he got a text message from Osaka’s agent, Stuart Duguid, inquiring about his availability.

“I had a great new gig at the U.S.T.A., and I was doing my expense report and I get that text message,” Jenkins said with a chuckle this week. “When a great adventure is offered to you, you cannot refuse it.”

Jenkins, 34, knows full well that job security at this level is fragile, which is one of the big reasons he was drawn to the U.S.T.A. post.

“My wife and I live there in Lake Nona,” he said. “Plus, with the coaching carousel, I didn’t want to go back out with another player and then they wake up on the wrong side of the bed and say, ‘Hey I’m not feeling this.’ I was thinking more about security because there are only a few, I feel like, out there that are worth being out here for.”

Osaka, with her talent and star power, is certainly on that short list, and she and Jenkins are now 2-1 after their first tournament together, which included one on-court coaching visit that Osaka jokingly began by suggesting she was having a midlife crisis.

“I just wanted to break the ice,” she said.

Keeping the mood light and keeping tennis in perspective seem like the right idea when there are all sorts of new and powerful forces at work, including celebrity and megamillions.

This also seems a good time for Osaka to remember that the controlled power and controlled emotion that she displayed to win in New York and again in Australia were anything but a fluke.