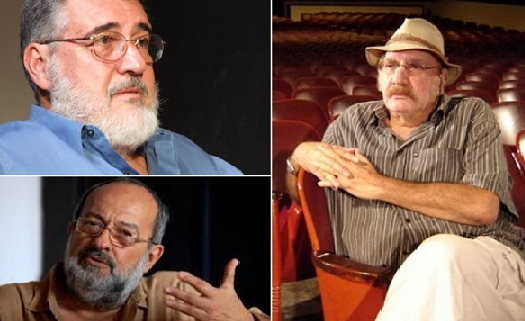 According to Prensa Latina, the Cuban Institute of Cinematographic Art and Industry (ICAIC ) producer Miguel Mendoza, director of photography Livio Delgado, and sound engineer Jerónimo Labrada, will receive Cuba’s National Cinema Prize 2019. They will be awarded the prize on March 22, at the Charles Chaplin Cinema, at the celebration of the 60th anniversary of the ICAIC .

According to multi award-winning Cuban filmmaker Fernando Perez, these are not media awards but they testify that behind each film there is a lot of effort and talent that deserves to be recognized.

Mendoza is the founder of the ICAIC and, at 88 years of age, he is a reference for generations of producers in the country. Among the films he produced are Memorias del subdesarrollo, La primera carga al machete and Fresa y chocolate.

While Delgado, also founder of ICAIC, worked on the photography of feature films such as Retrato de Teresa, Cecilia, Una novia para David, El siglo de las luces and Un hombre de éxito, for which he received a Coral Award at the VIII International Festival of New Latin American Cinema in Havana.

Labrada is among the founders of the Escuela Internacional de Cine y Televisión de San Antonio de los Baños (Eictv), where he created the Cátedra de Sonido [Sound Department] and has trained numerous quality professionals. In addition, he recorded most of the work of the Grupo de Experimentación Sonora del ICAIC , as well as records with authors such as Pablo Milanés, Silvio Rodríguez, Leo Brouwer, Sergio Vitier, Frank Fernández, Sara González and Isabel Parra.

The official presentation of the prize to Mendoza, Delgado and Labrada will take place on March 22, at the Charles Chaplin Cinema, during the central event for the 60th anniversary of ICAIC .