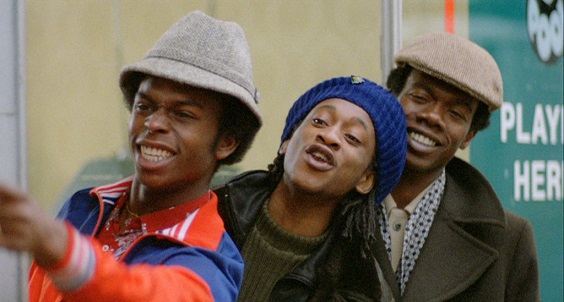 It’s not often a British-English language film needs subtitles, but it takes more than five minutes before a full conversation in the Queen’s English takes place in Francis Rosso’s cult film Babylon. That’s because Jamaican patois was the language of ease for young British Caribbeans in 1980, and it’s their generation the film is about. Now almost 40 years since its debut, the film will be released in the U.S.

Babylon is unique in more ways than one. It came at a time when British cinema was considered a ‘cultural desert’. Cannes Film Festival had rejected all British films for competition, but a few independent movies were selected for the Semaine de la critique. Ironically, Babylon – which showed the stark reality of racism and disillusionment of the time, and received a dreaded “X” rating as a result – flew the flag for Britain.

It was the bleak era of Margaret Thatcher, a prime minister known as ‘milk snatcher’ for removing a children’s free milk from schools. Her government oversaw an economic crisis where two million people were unemployed and those who did have work were striking. Meanwhile, the National Front, a racist political party that called for the deportation of non-white citizens, was comfortably part of society.

Enter Blue. A sharp-minded mechanic who lives for the weekend, when his reggae soundsystem, Ital Lion, battles other soundsystem crews. His character, played by Brinsley Forde, hails from South London, the heart of the Caribbean community in the capital. The areas of Deptford, Brixton, Lewisham and Peckham became the hub of Caribbean immigrants and their British-born children. They established communities, churches and worked hard to assimilate into the culture.

But the comfort of a tight-knit community can make outward attacks feel more brutal.

This much is true for Blue. Racism and discrimination comes from every angle – his boss, the neighbors and the police. In one scene, he’s chased for hours by white men in a car, only to be caught by the police, who arrest him for running away from them. The scene refers to the infamous “sus” law of the 70s and 80s. Police could search anyone they suspected of having committed a crime. 44 percent of those arrested under “sus” in London were Black people, even though they made up only 6 percent of the city’s population at the time, targeted for nothing more than being Black. Tensions from the law, coupled with unemployment, triggered riots in Brixton just a year after the film was released.

Almost 40 years later, not much has changed. Stop and search is a graduation of the “sus” law, giving officers the right to stop anyone who they suspect has illegal drugs, a weapon or something that could be used to commit a crime. It’s still used disproportionately against black people, even though it’s more effective in detecting crimes committed by white people. In the U.S., the results of a police interaction is similar, though usually more fatal. The recent killing of Willie Bo at the hands of police suggests that Babylon’s message is as timely as ever.

In the same way that Black communities now feel forced to push back, Blue is unable to brush off the attacks. For him, there are catastrophic results. But along the journey, music and identity are the lights in the dark that make it all bearable.

Reggae music and soundsystem culture are Babylon’s anchor. Though heavy, the film isn’t short of mischievous plots. We mostly follow Ital Lion as they prepare for their latest battle. Soundsystems would locate unique records, often sourced from back home in Jamaica, and aim to create a performance that most resonated with the audience. They were tested on loudness, instrumental selection and toasting, or rapping, which is Blue’s role. The final decision was made by crowd feedback. Traditionally they were set up outdoors but in cold inner-city London, battles took place in clubs, recreational centers and school halls.

It’s in one of these locations that Blue gives a commanding performance, toasting for his crew. Forde is, in reality, an acclaimed musician. He was a founding member of Aswad, whose single ‘Don’t Turn Around’ would go on to top the UK charts in 1988. It’s Aswad’s ‘Hey Jah Children’ that opens the film. But the final scene is the first time we see Blue perform in full to a room of revelers. As police storm the building in search of him, he freestyles into the hook, ‘We can’t tek no more ah dat’. It’s the film’s rallying cry, influenced by the experience of Rastafarianism which Blue has throughout the film. The song communicates the strain that he’s under, and the inevitable breaking point that he, like many other Black people, has reached.

If history has taught us anything, it’s that art is a way to channel our frustration. “We Can’t Tek No More” isn’t dissimilar to the way contemporary Black music being used as a form of resistance. Who could forget the moment when “Alright” became the unofficial soundtrack of Black Lives Matter rallies; when Beyonce crashed the Super Bowl to pay homage to the Black Panthers; or when Stormzy called out England’s current right-wing prime minister for her lackluster response following the Grenfell Tower fire. Music has always been a vehicle to protest, and that’s another timely message that Babylon assures us of.

There are some developments made since the film debuted that can’t be ignored. Though writer/director Franco Rosso (Bed Peace) and writer Martin Stellman (Quadrophenia, Yardie) consistently worked with community members to ensure the authenticity of the film, Babylon’s music director Dennis Bovell was the only Black member of the core crew. Mamoun Hassan, the film’s main financier said he “would have preferred” the director to be Black, but he believed that Rosso had enough of living within the black community to make it happen. With the likes of Noel Clarke, Steve McQueen, Amma Asante, and Richard Ayoade, finding the right Black British director in 2019 wouldn’t be a problem.

It would be unwise to say that their work wouldn’t exist without Babylon. Yet Babylon is most assuredly a window into a moment in time. Had it not generated such a cult following, we might have missed the lessons it has to offer all these years later.