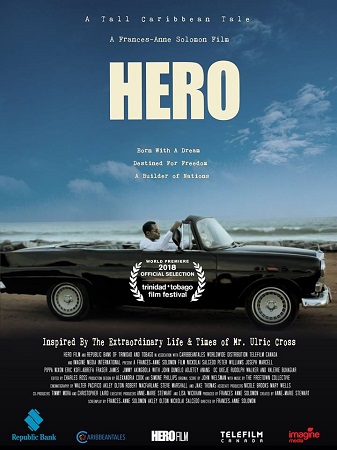 A review by Shane Slater for Awards Circuit.

Early in Frances Anne Solomon’s“Hero: Inspired by The Extraordinary Life and Times of Mr. Ulric Cross,” Nicola Cross – daughter of the film’s titular subject – states that she wishes she had explored her father’s life story before his death. But as the saying goes, better late than never. And after viewing the subsequent two hours of this globetrotting saga, audiences will likely agree that this film is overdue. An ambitious documentary-narrative feature hybrid, “Hero” showcases an accomplished diplomat/lawyer/decorated war veteran whose untold story deserves to be discovered.

The story begins with Ulric Cross’ childhood years in Trinidad and Tobago, where his academic prowess lands him an opportunity to attend the most prestigious high school in the country. Filled with hope and ambition, his life soon takes a tragic turn, however, after his mother suddenly dies and his father abandons the family. Now finding himself adrift without his support system, Cross is no longer committed to his dream of becoming a lawyer. But when World War II approaches, Cross gets a new lease on life and decides to enlist in the Royal Air Force to fight for the “mother country” England. Upon his arrival there, he gradually becomes influenced by rising anti-imperialist sentiments, eventually becoming a key figure in an African liberation movement that would change his life and the world forever.

As “Hero” charts the unpredictable course of Cross’ life, it immediately becomes clear that this an epic account of world history. Indeed, Solomon’s filmmaking is nothing if not ambitious, as the film touches on such major events as World War II and the various African independence movements throughout the 1950s and 1960s. Divided into chapters, the film’s first half lays the foundation for Cross’ socialist worldview as his interactions with fellow West Indian intellectuals fuels his disillusionment with British colonialism. Unfortunately, this stage of his life feels most shortchanged by the film’s cradle-to-grave approach. Despite some creative juxtapositions with the re-enacted scenes, the film’s brisk pacing and reliance on seemingly generic footage struggles to fully convey the impact of Cross’ wartime heroics.

Like Cross himself, the film is reinvigorated once the action moves to the African continent, giving insight into his remarkable influence on the politics of Ghana, Cameroon and Tanzania. Fully embodying Cross’ passion for the welfare of the African people, Nickolai Salcedo cuts a striking figure as he leads a memorable ensemble of actors. Indeed, the name-dropping throughout the film will delight history buffs as he crosses paths with such luminaries as V.S. Naipaul, Kwame Nkrumah and Patrice Lumumba. Furthermore, the archival footage from his stint in Africa powerfully compliments the storytelling, reminding viewers of some of the immense difficulties these men faced in their attempts to decolonize their nations.

Ultimately, “Hero” evolves into something bigger than Cross himself. Taking an admirably critical look at the various elements that both fostered and inhibited the cause for African liberation, Solomon has crafted a worthy tribute to Ulric Cross and the founding fathers of Pan-Africanism. As their struggle continues today, films like “Hero” will continue to be vital in fostering an awareness of African history and promoting the ideals of this important movement.

“HERO: INSPIRED BY THE EXTRAORDINARY LIFE AND TIMES OF MR. ULRIC CROSS” OPENS AT THE TIFF BELL LIGHTBOX FEBRUARY 28.