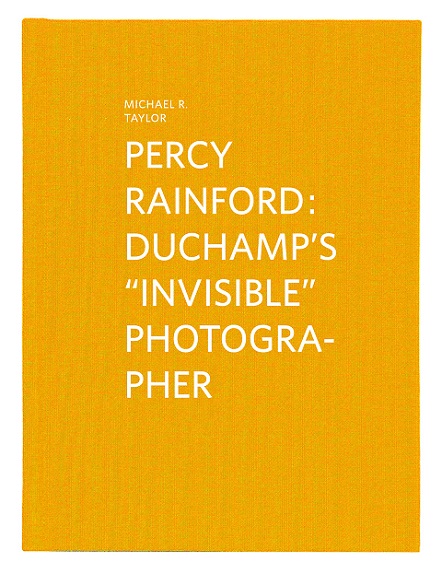 In “Bringing Back from Obscurity a Jamaican Photographer Who Worked with Duchamp” is a wonderful review by Joseph Nechvatal (Hyperallergic) on a new book by Michael R. Taylor, Percy Rainford: Duchamp’s “Invisible” Photographer. Written by Taylor, with a text by Frederick Kiesler, and edited by Stefan Banz, the book was published in January by L’association Kunsthalle Marcel Duchamp (KMD) as number 23 in Les Éditions KMD and co-published by Verlag für moderne Kunst and Les presses du reel.

Enacting a posthumous reassessment, the book Percy Rainford: Duchamp’s “Invisible” Photographer has poignantly rescued the neglected Jamaican artist Percy Rainford (1901–1976) from erasure. In this mouthwatering, mango-colored, small ­hardcover, the Duchamp scholar and chief curator at the Virginia Museum of Fine Arts, Michael R. Taylor, brings forth, just in time for Black History Month, the life of this documented alien resident’s unique experience executing commissioned photo projects in New York for Marcel Duchamp in the 1940s and ‘50s during the prickly Jim Crow era.

Maintaining a judiciously fair tack around clickbait accusations, Taylor reveals that between 1945 and 1956 Rainford worked as a commercial art photographer on a number of previously under-documented art projects with Duchamp, including the famous fictional, photographic self-portrait made for a special Duchamp issue of View magazine. Through Rainford’s technical mastery as visual interlocutor, this important photo image depicts the deceptive Duchamp (according to the caption) at the age of 85, next to a portrait taken by Alfred Steiglitz which was falsely dated 1922 and actually snapped in 1923. In reality, Duchamp was at the time only 58 years old, and he died at the age of 81. This zigzag semblance, along with Man Ray’s series of Duchamp cross-dressed as Rrose Sélavy, are benchmark pieces in the historical path of conceptual-fictional self-portraiture trailed by Urs Lüthi, Claude Cahun, Marcel Bascoulard, and Cindy Sherman, among others.

Through exhaustive research, Taylor discovered that the noble and modest Rainford grew up in the parish of St. Andrew outside of Kingston and, in 1923, at the age of 21 came to New York City on the call of his brother to work as photographer’s-assistant-cum-protégé to the avuncular if tipsy Henry Taylor (no connection to the book’s author). Taylor, after training Rainford in the art of documentary photography and darkroom skills, suavely left him the business when he perished in 1929. After overcoming a bit of repulsive racism on the loathsome building owner’s part by moving down the block on 57th Street, Rainford began a lucrative career as a commercial photographer. He shot crisp images of fine art on old fashioned, large-format, Century cameras for the Whitney Museum, MoMA, the Metropolitan Museum of Art, as well as various art magazines, newspapers, art dealers, and artists in need of prissy, high quality reproductions of paintings and sculpture.

A decade later, in 1956, Duchamp went back to Rainford to work with him on the first issue of Le Surréalisme, même, which featured on the cover Duchamp’s “Female Fig Leaf” (1950) manipulated and refigured by Rainford and Duchamp. On Duchamp’s instructions, he photographed the concave plaster form upside-down after lighting it to appear convex. Thus, with the resulting inverted chiaroscuro, the object took on the appearance of a post-coital shaved vulva dripping honey. This suggestion is enhanced by Rainford’s use of darkroom dodging and burning to isolate the suggestive form on a field of pure black, and by the overcast yellow Duchamp chose to tint the virtuoso image with.

The book then starts to shift gears with pages on Rainford’s charming family photos and his documentary photographs of Kiesler’s “Endless House” (1959). As an epilogue, it closes with a satisfying click on Kiesler’s March 10, 1959 diary entry concerning his professional interactions with Rainford. [. . .]