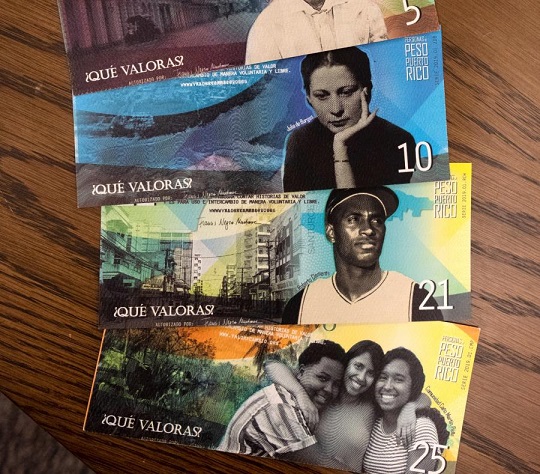 Artists Frances Negrón-Muntaner and Sarabel Santos Negrón are the creators of this innovative project that presents the first Puerto Rican social currency through the project named Valor y Cambio. As part of this experiment, the creators developed and printed a series of bills that represent four values: solidarity, equity, justice and creativity.

These bills, which do not replace the [U.S.] dollar, will be available and may only be used from February 9 to 17. People can access them through ATMs that will be set up in different points of San Juan and Bayamón. After answering a series of questions about what each person values, the machine will record the answers on video, and in return will grant an indeterminate amount of pesos, which may be exchanged for items in participating establishments. People who do not want to redeem them and prefer to collect them may do so.

Negrón-Muntaner, who is a filmmaker, writer, curator and professor at Columbia University, New York, explained that the project arose from research—carried out with a group of academics, journalists, and artists from the university where she teaches—which seeks to better understand Puerto Rico’s debt in a global context. As part of that process, Negrón-Muntaner discovered that, in various cities in Spain, Mexico, Brazil, Germany, and even the United States, a social currency has emerged, a community tool that facilitates exchange—be it work, time, or resources—and has served to deal with various economic crises. This currency, which does not replace the official currency, recognizes the value of work and the talents of people who do not have access to capital for different reasons, such as being unemployed or living at poverty levels.

“It arises to organize the resources and talents of a place where many people may be unemployed, but which does not mean they do not have skills, talents, and resources. It serves to exchange what exists without having dollars or whatever the national currency is. In that sense, it seemed to me that Puerto Rico was an ideal place for this resource to emerge, which I regard as a tool that communities or people of a particular industry can use to facilitate exchange, because one thing is the capacity for work and another is employment,” she said.

“The ability to work is independent of employment. A person like a bricklayer, who, even if unemployed, still has a skill that the community to which he belongs may need. In Puerto Rico, seems to me to be a place where there are many human resources, but there is also a high rate of unemployment. It seemed to me that this was a tool that could help some communities recognize, value, and better organize the resources they had,” Negrón-Muntaner added. She pointed out that the system, which is legal, seeks to organize the exchange in an equitable manner outside the logic of accumulation of the prevailing economy. “It would be like a more organized barter system at an administrative level,” she explained.

To present this alternative economic model in the country, the artist also thought that the best way was through an artistic, community, participatory and equitable project, which she called Valor y Cambio.

For this project, she discussed with her colleague Sarabel Santos Negrón, with whom she envisioned and designed the Pesos de Puerto Rico, which are more than mere bills; they are narrative documents that help tell the story of “people of weight” [important people; a play on words, because peso can mean both “bill” and “weight”] of the country.

Each ticket has a QR Code on the back, which may be scanned on a cell phone, directing people to the history of each of the figures on the bills. “The idea with this social currency is to ask the question about what we value, what is most important for us. The most important factor, and this is what 99.9% of the studies that have been done in various disciplines say, are the relationships between people,” said Negrón-Muntaner.

These figures and the community [of Caño Martín Peña] were selected for their commitment to public education, public health, justice, equity, labor rights, creativity, solidarity, the environment, and the right to housing, respectively.

“The United States’s banknotes, for example, are all men, all white, all politicians; while our bills have white, black, and mulatto people, women, children of immigrants, and a community. Many people like that the most important bill represents a community, which is to suggest that the community is more important than the individuals. Capitalist economy promotes that individuals seek their own benefit through competition, and we are saying, no; what is important is the community, the interactions between people,” said the professor. [. . .]