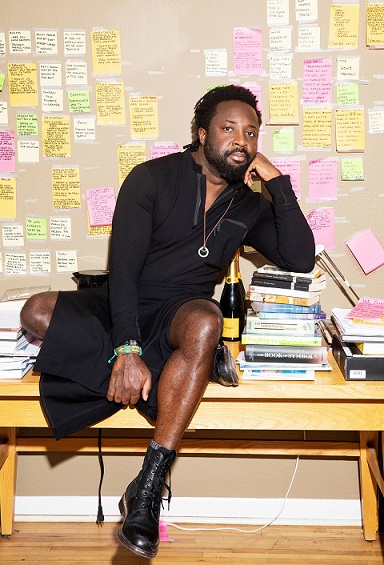 Marlon James, author of the Booker Prize–winning novel A Brief History of Seven Killings, can write almost anywhere. Except, he says, in his own apartment. “I have a fully functional office at home that I’ve never stepped into. It has a computer. It has a printer. It has a scanner. And it has cobwebs.” Instead, the Kingston, Jamaica-born writer bikes 10 minutes to his workspace in Minneapolis’s Stevens Square, where he keeps some of his most inspiration-sparking books—from speculative fiction by Ursula K. Le Guin to Aeschylus’s The Oresteia—and the walls are lined with research for his forthcoming Dark Star trilogy, an epic fantasy that takes place in an ancient, otherworldly Africa. The much-anticipated first book, Black Leopard, Red Wolf, follows a wily, solitary mercenary known as Tracker, as he embarks on a quest to find a missing boy—and along the way picks up a posse of comrades and enemies, including a shape-shifting man-animal and a terrifying pair of flesh-eating monsters, respectively. Here, we talk about the importance of perspective, the joys of Star Wars and X-Men, and why it pays to have smart friends.

Vanity Fair: Each of the books in the trilogy tells the same general story, but from three divergent perspectives. When you first conceived of the series, did you know who those narrators were going to be?

Marlon James: No, I didn’t. In fact, I didn’t know what the three perspectives were going to be until I was on the phone with Melina Matsoukas. She’s a director—she directs a lot of Beyoncé videos, and she directed Insecure. She was talking about The Affair, the TV show. At that point, I knew I wanted to tell a trilogy, but I didn’t know who was going to tell what. When we were talking, she mentioned The Affair, and how the structure of it is set up. The man’s version and the woman’s version don’t add up—even skirt length is different in the different versions. In the man’s version, it’s above the knee; in the woman’s version, it’s below the knee. She was saying, “This is a great idea for a TV show.” I’m like, “Forget the TV show. That sounds like a novel.”

For me, characters always show up first, before I know what their stories are. A hundred years ago, I would have probably [been] committed to an asylum. I honestly have no idea why they show up in my head. And then I usually stumble on ideas. I write by trial and error—I will write a hundred pages a night. A lot of my writing, I realize, is writing until something feels right. Which means a lot of wasted pages.

Is that something that you’ve had to learn to come to terms with?

Oh, absolutely. That is a hard thing to come to terms with. I wrote 500 pages of a kids’ novel—and put it down because it was so bad! But I couldn’t stop. I called a friend of mine and said, “If I’m writing 500 pages and don’t like a single character, should I stop?” He was like, “Step away from the laptop.”

I’ve never worked from home. I’ve always had a separate office. I think I need separate spaces. There are too many records at home. There’s too much distraction. I just can’t do it at all. I get there at around 10, 11, and I write till 6. I can be in the middle of a sentence. I don’t care; I stop. I’m very big on putting in a day’s work. One of my writing teachers, Nancy McKinley, once said, “If you develop a routine, the muses will show up.” I developed a practice. There’s people saying, “Routine has too many negative connotations.”

I can write pretty much anywhere now. My second novel I wrote when I was on tour for my first. And Brief History, my third novel, I wrote in pretty much every café in Minneapolis.

[. . .] What was your research like for Black Leopard, Red Wolf?