A report by Melissa Cristina Márquez for Forbes.

While most people in the northern hemisphere are blanketed under snow and actual blankets, Beneath the Waves is outside and on the waters of the Caribbean, helping make their vision come true: oceans that have thriving shark populations.

Sharks as predators can regulate the abundance, distribution, and diversity of animals in their environment, impacting the overall health of the marine habitats they call home. They’re famous for removing the sick and weak, and their scraps are an essential food source for scavengers. Across the Caribbean, overexploitation has led to growing concern for shark population health. Despite their popularity, the science on shark ecology and behavior is still developing, and many things remain up for debate or poorly understood.

“Sharks can be controversial – even within the scientific community. It’s incredible, really,” says Dr. Austin Gallagher, Chief Scientist of the conservation NGO Beneath the Waves. “Today, everyone has a chance to produce ground-breaking work on sharks that is timely, relevant, and impactful. I don’t know many other spaces like this. It’s pretty exciting,” he adds.

Beneath the Waves is a non-profit organization dedicated to advancing the conservation and scientific knowledge of sharks through cutting-edge science and collaboration. A big part of their focus is on the Caribbean, where today sharks are generally rare visitors to the reefs due to overfishing.

“As a kid, I was lucky to travel throughout the Caribbean on family vacations. Everywhere I went, I would go snorkeling or diving hoping to see sharks, but I was almost always disappointed. It was honestly soul-crushing for a boy who grew up loving these animals” adds Gallagher. “When I eventually discovered The Bahamas during graduate school, I finally saw the sharks – and in big numbers. There are few places worldwide that are as important to sharks than the Bahamas.” 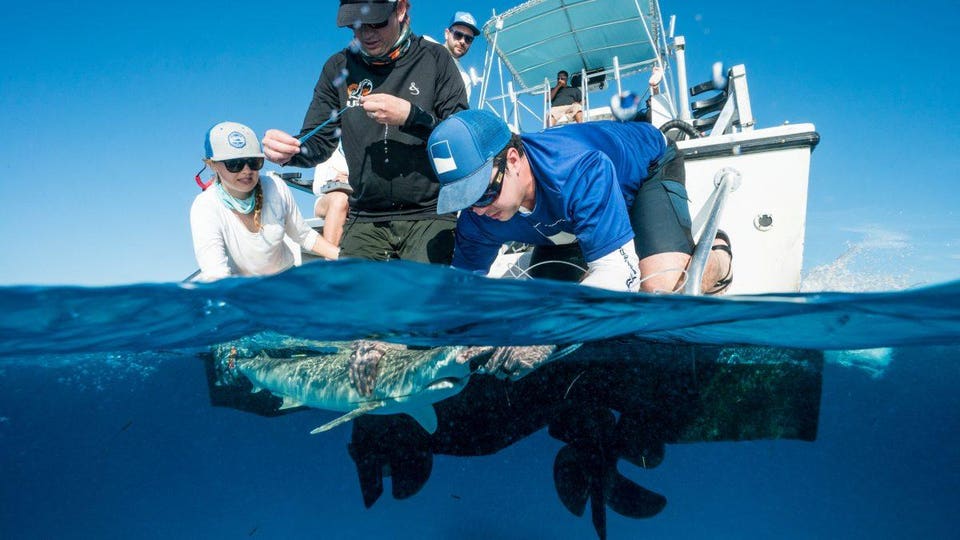 Researchers doing a work up on a shark.

How these Bahamian sharks move in and out of the Bahamian Exclusive Economic Zone (EEZ) is also, largely, a mystery. As many shark populations worldwide face increasing pressure from overfishing and habitat destruction, the researchers from Beneath the Waves are studying to see if shark sanctuaries are actually good for sharks or not. Knowing where they go and why allows scientists to examine how useful the national shark sanctuary is in protecting these shark populations.

If a region is designated as a “sanctuary,” it prohibits the commercial fishing of all sharks, prohibits the retention of sharks caught as bycatch, as well as the possession, trade, and sale of sharks and shark products within that country’s EEZ. Sanctuaries have become a popular conservation tool throughout the Caribbean and Pacific, however, some question their efficacy, largely due to the lack of scientific evidence for how sharks and humans use them throughout the year.

In 2018, Beneath the Waves launched one of the first long-term studies focused on understanding the benefits of sanctuaries to sharks, focusing on using the Bahamas shark sanctuary as a model. Beneath the Waves is evaluating the movements of various species of sharks in the Bahamas by tagging sharks with internal acoustic transmitters and monitoring their habitat use throughout the year with fixed receiver stations. They are focusing primarily on Caribbean reef sharks, due to their abundance, economic importance, and similarities to reef sharks in other parts of the world. Other species they will be tagging include nurse sharks (Ginglymostoma cirratum), tigers (Galeocerdo cuvier), bulls (Carcharhinus leucas), and hammerheads (Sphyrna species).

“Marine protected areas give us the opportunity to experience the ocean in its natural state,” says Rose Mann, Board Member for Beneath the Waves. “There are few examples where we can see sharks living without interference or disturbance, so we want to study this management tool in real time, and see how it can be improved, adjusted, and then ultimately scaled,” she adds. 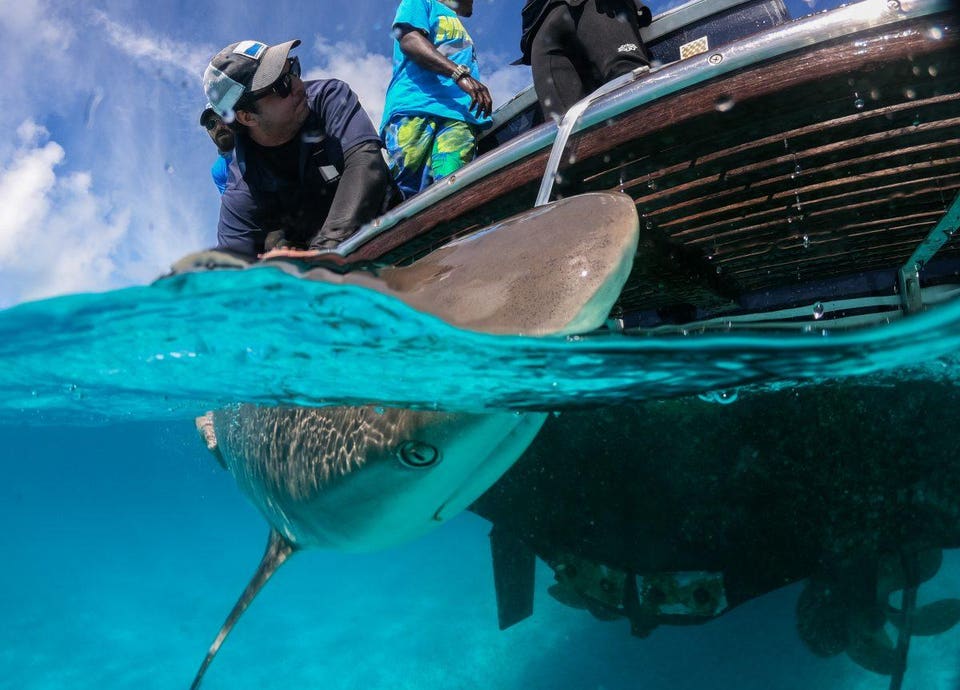 Researchers doing a work up on a shark.

Since the launch of this initiative in 2018, Beneath the Waves has had three successful expeditions with 76 sharks tagged, 45 of them implanted with acoustic telemetry tags, and 12 sharks tagged with satellite tags. With two receiver arrays constructed around New Providence Island and the Southern Exumas, and collaborations with several partners who also manage acoustic arrays throughout the country, sharks will continuously ping for the next several years. Partners include Shedd Aquarium, Stony Brook University, Bimini Biological Field Station, Cape Eleuthera Institute, University of Miami, and Florida International University. They also plan to employ sophisticated new methods to analyze the tracking data. These expeditions have also allowed for 250 physiological samples to be taken for additional sanctuary-level questions related to shark health, diet, and longevity, which will also shed light into how sanctuaries affect shark life histories over time, compared to areas where they are not protected.

Pulling off a study like this requires extensive collaboration—and Beneath the Waves has forged partnerships with nearly a dozen organizations, and is taking an entrepreneurial approach to science and conservation. This research has potentially far-reaching implications for island nations interested in designing marine protected areas and improving on existing shark conservation policies. 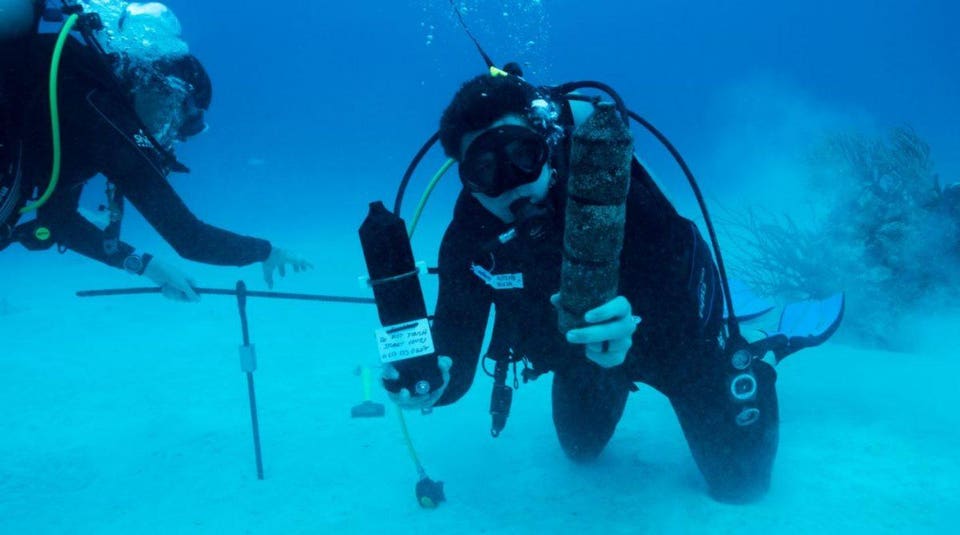 Setting down the arrays to capture shark movements.

So large is their study, we have decided to tell you more about the project’s many objectives in a series of multiple articles that will follow this one, separated out by different themes. Does protecting sharks within sanctuaries provide ecosystem, environmental, cultural, and economic benefits? Beneath the Waves hopes the data from this project answers this multi-faceted question.