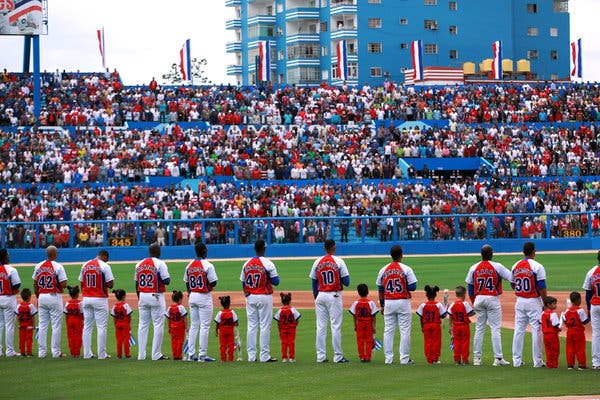 A report by Ed Augustin for The New York Times

The Sancti Spíritus Roosters will face the Villa Clara Orangemen and the Ciego de Ávila Tigers will meet the Las Tunas Woodcutters as the Cuban National Series playoffs begin on Jan. 4. But none of Cuba’s best baseball players will be on the diamond.

“All the stars have gone,” said Mario Ojeda, 79, a fan and former catcher in the league. “How has baseball changed over the last decade? It’s like night and day.”

Cuba is hemorrhaging ballplayers: Over the last three years, more than 300 have left the country, some after arduous journeys in the hands of smugglers, most hoping to try their luck in the United States. There are now 25 players on Major League Baseball rosters who were born in Cuba.

On a proud island where baseball embodies national identity, this exodus has been a painful blow.

“It’s contradictory,” said Ismael Sené, a Cuban baseball historian. “We don’t like our players going. But on the other hand, we want them to triumph abroad because they are products of our system.”

Top ballplayers have dribbled out since the Cuban Revolution ended in 1959 (and to a lesser extent, before then). Yet despite receiving multimillion-dollar offers to defect while the national team was on tour, the vast majority of players remained loyal. They were committed to team and country, discouraged by the difficulty of leaving, or feared for their loved ones, who would be left behind indefinitely.

Defections, however, began to accelerate a decade ago.

Relaxed travel restrictions and the spread of the internet allowed baseball agents to penetrate Cuba like never before. Even Cubans who had left the country but failed to sign in the major leagues could earn a commission by recruiting former teammates through social media.

Cuba has relaxed its migration laws: Before 2013, ballplayers’ movements were more strictly controlled, enriching smugglers who siphoned players off the island on cigarette boats for hefty fees. It became easier for an agent to pay for a player to get a passport, fly him to Haiti (where he could establish the third country residence required to sign as a free agent), and have him cross the border to the Dominican Republic, where he could train and demonstrate his skills in M.L.B. academies.

The current major leaguers Yuli and Lourdes Gurriel Jr. walked out on the national team in 2016 as it played in the Dominican Republic; Víctor Víctor Mesa, Víctor Mesa Jr. and Lionard Kindelán, among the last prospects on the island, flew away last spring.

Víctor Mesa Jr., left, and his older brother, Víctor Víctor Mesa, who played for Cuba at the 2017 World Baseball Classic, left Cuba last spring and are now members of the Miami Marlins’ organization. 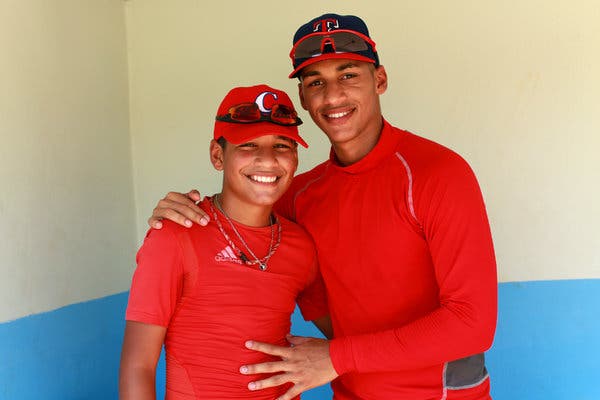 All are children of Cuban baseball royalty who won Olympic gold in 1996.

Their generation’s dream of representing the homeland has largely given way to the dream of playing in the major leagues for American-style paychecks. Cuban ballplayers make $40 a month, slightly more than the average state wage.

When they won the National Series last season, the Granma Stallions were rewarded with a week at an all-inclusive resort and rice cookers; as a free agent in November 2016, Yoenis Cespedes, who grew up playing in Granma Province, signed a four-year, $110 million contract with the Mets.

Cuba’s baseball federation and Major League Baseball announced an agreement on Dec. 19 to legalize and streamline the transfer of professional baseball players to the United States and Canada in an effort to end the smuggling of athletes and to bring order to the byzantine paths players from the island must take to clubs. The agreement, however, must be approved by the American government because of the longstanding trade embargo against Cuba, and the Trump administration has so far given mixed signals about it.

A more systematic recruitment could better regulate the departures of Cuba’s best players, which have left the country’s national team foundering. In July, Cuba came home without a gold medal from the Central American and Caribbean Games for the first time since 1982.

Major league games are broadcast in Cuba. Until a few years ago, when Cubans stepped up to the plate, censors edited them out, acknowledging a reality everybody knew was too painful.

Though the strongest players have already been gleaned, agents know the Cuban system can still generate quality players, and so have adapted their approach to woo younger players, Cuban baseball officials said.

Yovani Aragón, Cuba’s national baseball commissioner, said boys as young as 13 were being lured away to sign as free agents in major and minor leagues in other countries, including South Korea, Panama, Nicaragua, Venezuela and Puerto Rico. This puts them in a better position to eventually sign with Major League Baseball.

“Traffickers now make contact with the parents,” he said. “They are taking away not just players but entire families.”

Cuba’s response to defectors is uncompromising: Those who leave illegally are, with the rarest exceptions, exiled, barred from returning to the island for eight years. But players who leave legally, such as Las Tunas first baseman Rafael Viñales, whose American dream didn’t work out, can now return to play.

And since 2013, Cuba has borrowed from the capitalist playbook, allowing clubs in Japan, Italy, Canada, Panama and Colombia to lease players for a part of the season.

Roel Santos, 30, Granma and Cuba’s leadoff hitter, earned $150,000 for playing five months last year in Japan. He said the cash has stopped him from worrying about making ends meet and allowed him to focus more on his game. He has bought a few houses in Cuba but is hardly living the high life — like all other Granma players, he shares a no-frills hotel room with a teammate on game days.

Foreign contracts have led to abrupt inequality on the field, but have not stopped the flight: Ciego de Ávila Tigers outfielder Adolis García did not come back after his contract with the Yomiuri Giants expired. Last year, he signed with the St. Louis Cardinals.

“It hurts when a colleague you’ve known for ages decides to go,” Santos said. “Before, people took it more to heart. Now it’s happened so many times, it’s become normal.”

Carlos Martí, 69, the manager of the Granma Stallions and Cuba’s national team, said he saw defections as part of a broad plan of imperial sabotage.

“They are trying to damage Cuban baseball and, above all, the Cuban system,” he said during a team practice at the Martyrs of Barbados Stadium, which is named after a Cuban fencing team that died in a plane crash in 1976 in which anti-Castro exiles and a former C.I.A. operative from Venezuela have been implicated.

Martí, like many Cubans in high-profile positions, blames the American embargo for scant resources. Practice balls are waterproofed with yellow, oil-based paint and used for two months. The third baseman Osvaldo Abreu, 28, has never had his own bat.

The consensus among Cuban players, coaches and fans is that the best way to stem the flow is through the deal with the M.L.B. Reaction to the deal from players and fans was euphoric.

The agreement would make Cuban players in their mid-20s eligible, in an effort to preserve youth development and play in Cuba. Cuba’s baseball federation would also get a cut of the players’ M.L.B. earnings.

“This would create a system that allows Cuba to retain their homegrown talent for an appropriate period of time,” said Dan Halem, M.L.B. chief legal officer.

Approval of the agreement can come none too soon for those in Cuban baseball.

“We’re at a critical point,” said Aliet Arzola Lima, a sportswriter for Granma, the Communist Party’s official newspaper. “Without a deal, the situation will continue — but it can’t get any worse than it is at the moment.”