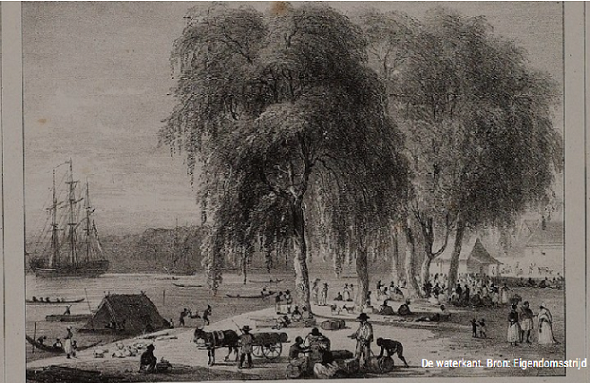 In October, we shared news about a new publication Eigendomsstrijd: De geschiedenis van slavernij en emancipatie in Suriname [Struggle for Ownership: The history of slavery and emancipation in Suriname] (Ambo|Anthos, 2018) by historian Karwan Fatah-Black [see previous post Eigendomsstrijd]. Historiek magazine published fragments, from the introduction to the book, about a piece of land that was chosen for manumitted slaves: Frimangron. Translations of the excerpts below are by D.S. Battistoli.

Because no one really wanted to live there, the strip of land between the city and the first plantations remained unused for a long time. Between the Drambrandersgracht [Distiller’s Ditch] and the spillway appropriately enough called Limesgracht [Border Ditch], there lay a field where not much happened. It was popularly known as Koeiknie, just like the fields to the west of the city: it was so swampy that the cows there sank up to their knees in the mud. Later it would get the name Frimangron, roughly “land of the free people”. The eighteenth-century cartographers were not in agreement over whether Frimangron was really even part of the city. Sometimes the Pontenwerfstraat [Boatyard Street] that ran across the neighborhood  was neatly drawn in with delimited parcels, but just as often, it fell outside the red lines maps used to outline the city proper.

Still, people lived there. The inhabitants belonged to a group that didn’t really have their own place in a society otherwise marked by slavery and the need to export plantation products. In the middle of the eighteenth century, Suriname was split between fifty thousand black slaves and two thousand white owners. The inhabitants of Pontenwerfstraat and the rest of Frimangron had often been slaves, freed in their own lifetimes. In a society fueled by the work from enslaved Africans dominated by a white elite, people of African descent who weren’t slaves stood outside the system. They were often poor but free.

Quietly, on the margins of the capital and of society generally, a free community of former slaves and their descendants rose. For a long time their existence remained unrecorded; yet while master and slave struggled for life and death on the plantations, the free Afro-Surinamese rose out of the woodwork. Since the manumissions of individual slaves passed at a trickle, the size of the free group in Suriname was limited for a long time. The slave system in Suriname was hard, while the chance of manumission was small: in the 1760s, after a hundred years of slavery, the free non-white population in Suriname comprised not more than three hundred people. Its growth was generally unnoticed in the face of larger flows.

By the eve of the abolition of slavery in 1863 a century had passed, and the free non-white population had reached 15,000. That year, 34,000 people were emancipated. While in the nineteenth century the total enslaved population dropped continuously, the free non-white population grew. By 1863, pre-abolition manumission had, in the words of historian Ellen Neslo, already eroded the slavery system. Working together, the budding community of the free helped make the freedom of many of their peers a reality. [. . .]

Due to the loud hammering, and the tarring of ships’ and boats’ hulls, the boatyard was placed on a run outside the city. Now there was a path running thence inland through the muddy meadow to the “Landsgrond”—a plantation where the colonial government grew some food, but rarely did anyone walk over the path leading there, and certainly not in the rainy season. While in the dry season, there was little shelter from the burning sun on the path from the yards, in the rainy season its dust turned to mud. An old map called the area along the river not Koeiknie, but “drowned land”.

Anyone who got a piece of land on Pontenwerfstraat built a hut and planted a shade tree; no one worried about what happened on these plots. Traffic had no need for the road. Anyone who wanted to get from the city to the shipyard could pass along the river and through Saramaccastraat—the link between the city center and the free community. If you were going to the Landsgrond, you could more easily use the extension of Domineestraat [Priest Street], which only got difficult right at the yards. Thus, in the quiet borderlands around Paramaribo, a free community grew that, by the end of slavery in 1863 seemed to have taken over the city. Outside the violent plantations, a lower class had sprung up. As is often the case in history, the culture came out of the margins.

The way to freedom

The urban borders of Suriname are rarely the focus of historians. The path the earliest free people took on their way to freedom always gets less attention that the history of plantations and of heroic rebellions. As a result, the growth of the free community in the city is for many an unknown part of history. While it may be unimportant in the eyes of the mainstream, it is crucial for an understanding of slavery and the period after its abolition.

Slavery’s existence in Suriname was thanks to the combination of violence and the complacency of the enslaved, who had imposed upon them a belief in their own inferiority. Still, the threat of violence and the deeply imprinted slave mentality were not themselves enough to keep slavery going in Suriname. All slave systems around the world had escape routes built in. The manumission of a privileged few gave hope to those who remained in slavery: by letting a few go free from time to time, the owners awoke in their slaves the feeling that a life after slavery was possible, though only for those who were loyal and (simultaneously) excellent. Such incidental manumission contributed to the stability of the slavery system; the hope of freedom increased serviceability. It also set the existence of owners in a positive light: the manumission of slaves gave them the feeling that they ruled their slaves justly.

[. . .] In Suriname, where slavery was grounded not merely in legal status, but in the racial distinction between white and black, the middle group came to be an exception. The existence of free people who were black undermined the idea that white ruled and black served. The banal difference between black and white was, despite its facility, a key justification for the slavery system and was vital for the plantation directors who stood day in and day out against a large majority of enslaved Africans. If the majority didn’t believe itself to be inferior and to lack the right and the power to overthrow the slavery system, then there would be a swift end to the plantation economy in the colony. Government of an enslaved population required owners to ask time and time again how best to balance corporal punishment, psychological terror, and the prospect of reward. [. . .]

[Translated by D.S. Battistoli. See the original text at https://historiek.net/frimangron-slavernij-suriname-karwan-fatah-black/83126/]