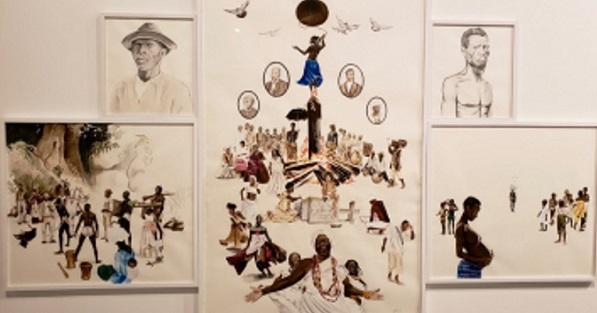 Hyperallergic magazine compiled a list of the top 20 exhibitions around the world this year. One of them was “Histórias Afro-Atlânticas” [Afro-Atlantic Histories], which was on view at São Paulo Museum of Art (São Paulo, Brazil) from June 28 to October 21, 2018. It presented a comprehensive mapping of the expansion of the African diaspora among Africa, the Americas, the Caribbean, and Europe between the 16th and 21st centuries. [See our previous post An enthralling show of Afro-Atlantic history illuminates Brazil.]

Description (by Seph Rodney): The exhibition Histórias Afro-Atlânticas (Afro-Atlantic Histories), mounted at the São Paulo Museum of Art, (MASP) and the Tomie Ohtake Institute, is breathtaking in ambition, scope, and display. It was one of those few exhibitions that actually delivered what it said it would: a comprehensive and complex retelling of the expansion of the African diaspora among Africa, the Americas, the Caribbean, and Europe between the 16th and 21st centuries. At its heart, the exhibition imagines that the historic influence of African people on Brazilian culture is to be both examined and celebrated. Curators Adriano Pedrosa, Ayrson Heráclito, Hélio Menezes, Lilia Moritz Schwarcz, and Tomás Toledo used the occasion of the 130th anniversary of slavery’s abolition in Brazil — the last country to end the trade, which brought about 11 million Africans to this side of the Atlantic — to launch its critical investigation from the vantage of art.