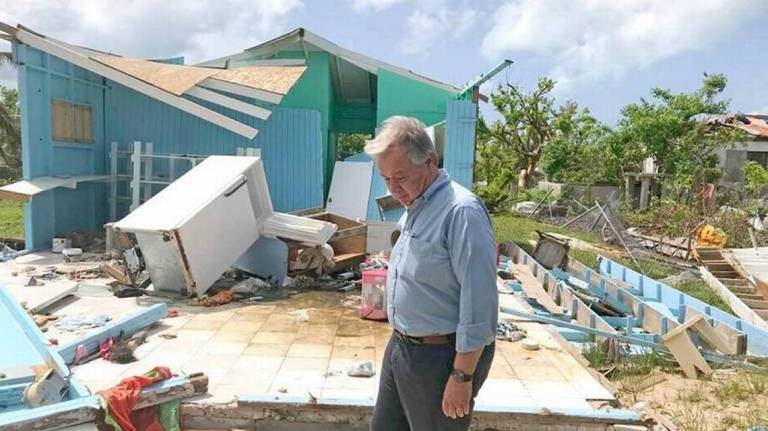 A report by Jaqueline Charles for The Miami Herald.

With natural disasters and climate change posing a serious threat to island-nations in the Caribbean, Canada’s climate-change ambassador said the country is renewing its efforts to help — both financially and by focusing an international spotlight on the problems.

“We’re committed to supporting the Caribbean in building resilience to climate change, and we’re committed to doing that in a couple of ways,” Patricia Fuller said during a recent visit to Miami, where she attended a gathering of Caribbean business leaders exploring renewable energy initiatives.

“Natural disasters carry no passport. No country is immune. No region is safe,” Lagarde told Caribbean finance and prime ministers, and the heads of central banks during a high-level gathering last month at the IMF headquarters in Washington. The conference, “Building Resilience to Natural Disasters and Climate Change in the Caribbean” was sponsored by the IMF, the World Bank and the Inter-American Development Bank.

While Caribbean countries have made some progress — such as the coordinated response following last year’s hurricanes Irma and Maria — the countries now need “a collective effort…toward building longer-term resilience,” Lagarde said.

According to Lagarde, the islands of the Caribbean are among the 25 most vulnerable nations to climate change.

In Miami, Canada’s Fuller said her nation is committed to helping islands lessen the impact of climate change and natural disasters. In addition to its $100 million pledge to the Caribbean last year for storm recovery and climate-resistant construction, Fuller said Canada is focusing international attention on the vulnerability of island nations and coastal communities.

Fortifying risk insurance is part of the program. Canada is helping the island-nation of Dominica, for example, pay its insurance premiums after Hurricane Maria nearly wiped out out the island’s housing stock last year.

“There is a recognition we need to scale up risk insurance and there is a role for governments like Canada to support that,” Fuller said.

The 2017 storms underlined the importance of resilient infrastructure, she said, as hurricanes are expected to increase.

Fuller, who attended last month’s Caribbean Renewable Energy Forum conference in downtown Miami, said she sees the private sector increasing renewable power capacity. As a result of that interest, Canada is contributing to World Bank and Inter-American Development Bank investment programs that will help to reduce risk for private sector projects in the Caribbean region.

“This is important because we know that there isn’t the borrowing capacity in the region to do all of the things that they want to do to build resilient infrastructure and expand renewable power,” she said.

For example, in Jamaica, Canada is supporting a private-sector-led wind-power project — a step toward renewable energy targets newly set by the Jamaican government.

“The larger challenge is around getting these projects off the ground and supporting the governments in accessing these sources of financing in an effective manner,” she said. “What it takes is the governments of the region, which I see them committed to doing …putting in place the policy environment and a regulatory environment that allows private sector proponents to put forward projects in the region.”

During her Miami visit, Fuller also visited Miami Beach to see how the city is adapting to rising sea levels. The Caribbean and others, she said, can learn from the community.

“They are adopting an approach that thinks long-term and takes short-term steps,” she said, of Miami Beach. “It’s very impressive to see how they are already raising streets, putting in place the pumping infrastructure and thinking about building design and how that needs to change as new buildings are put in place.

“There’s lot for the world to learn from that,” she said.